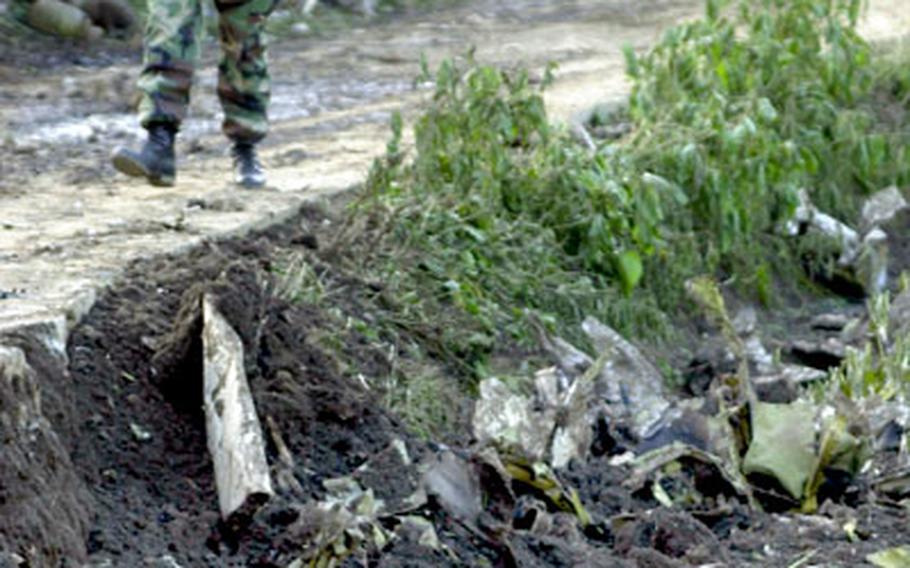 A military policeman walks past a piece of the landing gear from a C-12 Huron that crashed near Kongse-ri, about seven miles southwest of Camp Humphreys. (Joseph Giordono / S&S)

A military policeman walks past a piece of the landing gear from a C-12 Huron that crashed near Kongse-ri, about seven miles southwest of Camp Humphreys. (Joseph Giordono / S&S) 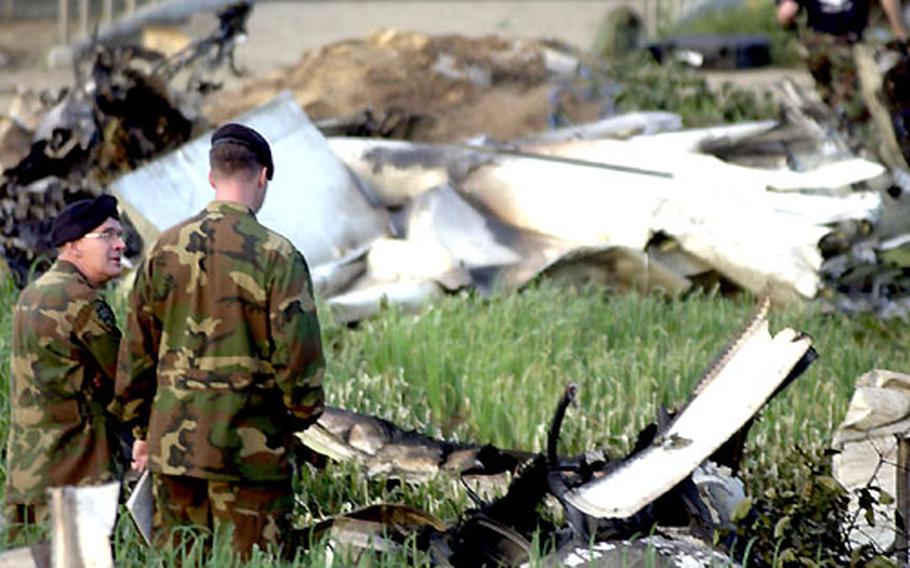 Military investigators stand amidst the wreckage of the C-12 Huron. (Joseph Giordono / S&S)

Witnesses described the twin-prop C-12 Huron as on fire and &#8220;wildly spinning&#8221; around 2:35 p.m. before it plowed into the field between a busy road and the edge of a small farming community.

Several witnesses said they were convinced the pilots, indentified by the Army as Capt. Kevin M. Norman and Chief Warrant Officer 3 David W. Snow, both assigned to Company A, 6th Battalion, 52nd Aviation, 17th Aviation Brigade, Seoul Air Base (K-16), managed to steer the plane away from the residential area, sparing any injuries to those on the ground.

The plane was on a routine test flight from Seoul Air Base, said Lt. Col. Steve Boylan, an 8th Army spokesman. The pilots&#8217; hometowns and ages are being withheld pending notification of next of kin, he said.

Other witnesses gave similar accounts of the crash, which occurred on an almost cloudless day.

&#8220;I heard some funny noise from the aircraft and I thought there was some kind of air show going on,&#8221; said Lee Jong-Lae, who was fishing on a nearby river. &#8220;I saw white smoke and black smoke coming out of the aircraft, and then it just hit the ground. The aircraft was upside-down.&#8221;

By early afternoon, Army investigators had sealed off the field and were combing areas around large chunks of debris. On one side of a small berm, a piece of the plane&#8217;s landing gear was embedded in the dirt; on the other, two large sections of the 10-seat aircraft still smoldered.

The crash impact threw dirt clods into a building across the road and broke a nearby butcher shop&#8217;s window.

&#8220;I was speechless when I first saw the scene,&#8221; said Lee Ki-Young, who owns a nearby restaurant. He said military officials told him not to touch anything at the site, which included the chicken coop he used to provide poultry for his restaurant.

A long gash was torn into the dirt on one side of the field, with most of the debris resting nearby.

South Korean emergency workers were the first to arrive at the site, Boylan said.

&#8220;I deeply appreciate the efforts of local emergency personnel in responding to this tragic accident,&#8221; Lt. Gen. Charles C. Campbell, the 8th Army commander, said in an Army press release.

&#8220;Our heartfelt condolences go out to the families of these two heroic aviators who did everything they could to prevent civilian casualties.&#8221;

The C-12 Huron is the military version of the Beechcraft Super King Air, made by Raytheon. Its wingspan is 43 feet, and it&#8217;s 14 feet long. The C-12&#8217;s first military deployments were in the 1970s, with several hundred more ordered in the mid-90s, according to Globalsecurity.org.

A team from the U.S. Army Safety Center in Fort Rucker, Ala., will investigate, Boylan said. The team will be separate from the one investigating an Army Black Hawk&#8217;s crash landing earlier this week in a river near Taegu.