Two Hasan lawyers to appeal ruling compelling them to stay on 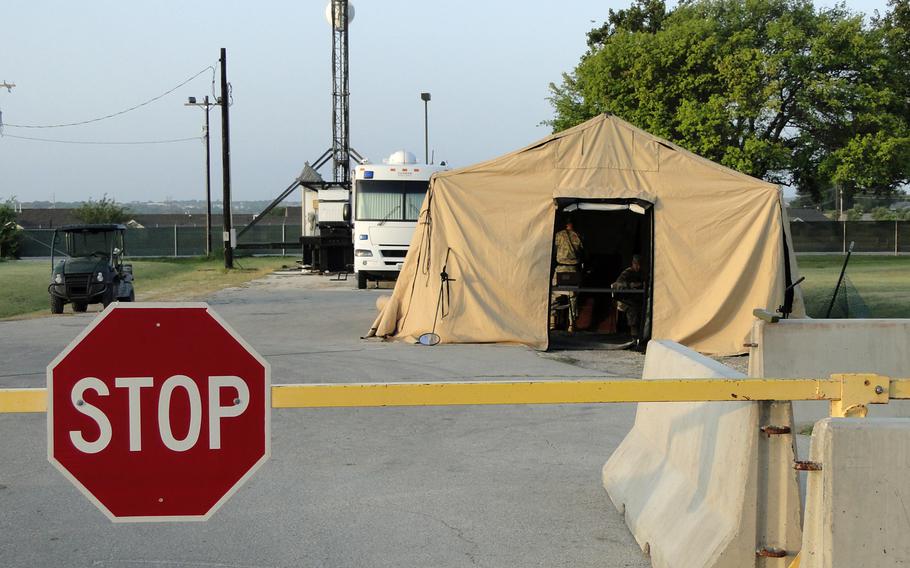 FORT HOOD, Texas — Two of Maj. Nidal Hasan’s standby lawyers were excused from court Friday to file an appeal to the judge’s Thursday ruling that they continue to assist Hasan in his ongoing murder trial.

Hasan is representing himself, but has three military lawyers assigned to help him with his defense. He could face the death penalty if convicted in the Nov. 5, 2009, shooting at a Fort Hood clinic that killed 13 people and injured more than 30 others.

Judge Col. Tara Osborn ruled that despite lead defense counsel Lt. Col. Kris Poppe’s belief that Hasan is seeking the death penalty — a goal Poppe called “morally repugnant” — the team must continue to help in his defense. Poppe noted then that the team planned to file an appeal. The other two defense lawyers, Maj. Christopher Martin and Maj. Joseph Marcee, were allowed to leave the courtroom Friday to file that appeal.

After the ruling, more soldiers who were in the medical Soldier Readiness Processing center the day of the shooting described the horror for the panel of military officers who will determine Hasan’s fate.

Sgt. 1st Class Paul Martin said he was sitting in the waiting area with his head in his hands, thinking “we’re going to be here forever,” when the shooting started. Like many of the other witnesses, he testified he thought it was a training exercise at first.

A bullet went through his right arm – so powerful it knocked him out of his chair. But he initially thought it was a paintball, he said, and was irritated.

“How [are we] going to get our uniforms clean?” he remembered thinking. “We’re about to deploy and we’re getting shot with paintballs here.”

It wasn’t until he put his hand to his wound and saw the “deep red blood” that he realized the shooting was no drill.

On Thursday, 15 witnesses took the stand, with many breaking down as they described seeing friends fatally injured.

Former private Lance Aviles choked up as he tried to explain the moment Pfc. Khan Xiong slumped over next to him, dead.

“If you hear this sound, you’ll never forget it, but it’s so hard to describe,” Aviles said. “I see my battle buddy on the floor.”

Spc. Meagan Martin cried as she remembered seeing the soldier she had just been teasing about his sea horse arm patch bend forward.

“All this blood started coming out of his mouth,” she said. “I thought, ‘Oh my God, this is real.’”

Sgt. Monique Archuletta was overcome with emotion as she recalled hearing Lt. Col. Juanita Warman, a woman she had deployed to Germany with, say, “I’m not going to make it. I’m going to die.”

But while witnesses wiped away tears or worked to control their anger and family members of the victims squeezed one another’s hands in the gallery, a pale, frail-looking Hasan kept his head down, glancing up only occasionally.

The Army psychiatrist, paralyzed from the waist down after being shot by police, opened the trial saying evidence would show he was the shooter. He has been mostly quiet since.

He has asked only a handful of questions of a few witnesses – none of them shooting victims – and Thursday offered his first objection, asking a judge to remind Sgt. 1st Class Maria Guerra she was under oath.

Hasan looked away as Aviles was asked to identify the shooter.

“He looks like [expletive], but I see him,” Aviles said, as one woman in the gallery gasped. The comment was struck from the official court record, and Aviles later pointed to Hasan with both hands to identify him.

Guerra said she barricaded herself and a few others inside their office and she listened intently as the shooter canvassed the clinic. She briefly ran out of the building, but stopped short when she realized she should be helping the wounded inside.

When she saw others working on the dead, she yelled at them to move on to others who might be able to be saved.

Then, she grabbed a black marker.

Running to get bandages, Guerra saw a civilian nurse crying hysterically as she held Warman’s hand.