Kayla Darvin and Joshua Bennett hold “Surviving on CocoMoa Island,” the book they wrote and had published as part of a project that began in Carol Miller’s, background, gifted education class at Cummings Elementary School at Misawa Air Base, Japan. (Jennifer H. Svan / S&S)

Kayla Darvin and Joshua Bennett hold “Surviving on CocoMoa Island,” the book they wrote and had published as part of a project that began in Carol Miller’s, background, gifted education class at Cummings Elementary School at Misawa Air Base, Japan. (Jennifer H. Svan / S&S) 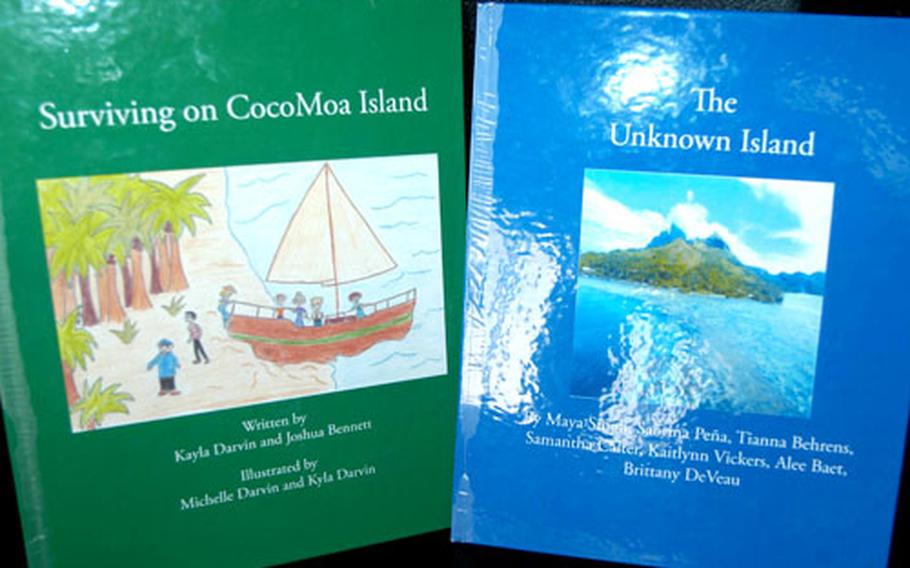 Just ask Kayla Darvin and Joshua Bennett, the fifth-grade authors of the latter.

Those 20 pages, with only 75 words apiece, took the budding authors two months to pen.

But the payoff has been well worth it: &#8220;To have it actually published, it&#8217;s just so awesome to look at,&#8221; beamed Kayla, holding the emerald-green hardback she helped ink.

What started out as a problem-solving assignment in Cummings Elementary School teacher Carol Miller&#8217;s gifted education class turned into a first for the small Misawa school: Two published children&#8217;s books.

Published through a stateside company that sells book-writing kits, the books weren&#8217;t distributed beyond the school. Each author received a copy, as did the library. No one was paid or received royalties; the project, in fact, cost about $500, for the kits and book copies.

But with the exception of churning out letters to literary agents, the students got experience with what it takes to turn an idea into a finished product, Miller said, from refining and whittling their words to providing illustrations.

The original assignment for &#8220;Surviving on CocoMoa Island&#8221; began as a simulation for Miller&#8217;s students: They were to resolve through role-playing and brainstorming how six castaways survive being shipwrecked. One thing led to the next, and before long, the discussion turned into a script for a play. Kayla and Joshua then approached Miller about turning the play into a children&#8217;s book.

Out came the book kit, which guided the students on design, limited lines per page and allowed them even to choose their own font.

Kayla&#8217;s older sister, Michelle, provided detailed drawings in color pencil and Miller was &#8220;chief editor.&#8221; Miller also helped eight of Nancy Disla&#8217;s fourth-graders with their own book after they also expressed an interest in the project. That group pulled its photos from the Internet, giving due credit in their book &#8212; a lesson, Miller said, in copyright laws.