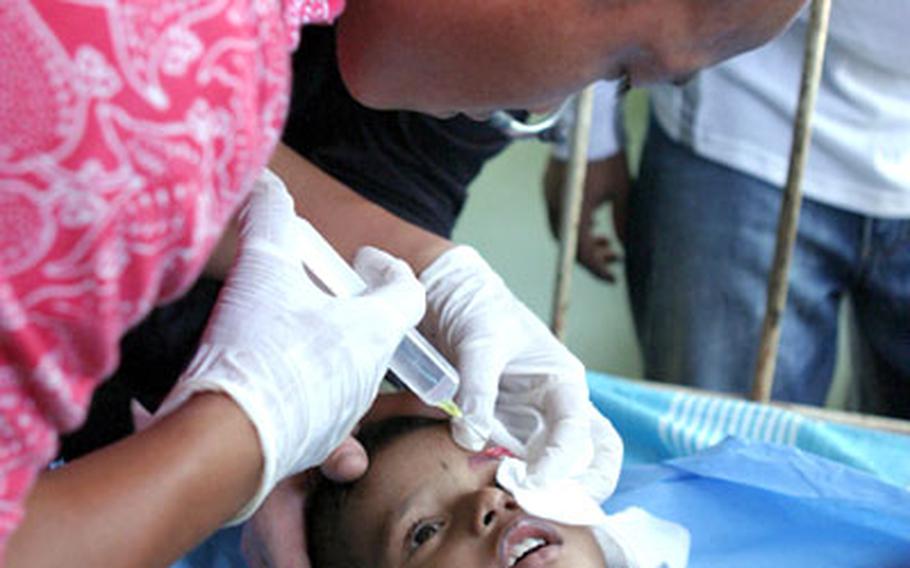 That was the experience of two Navy medical personnel teams from the U.S. Naval Hospital, Okinawa, recently returned from Sri Lanka.

One team of 17 was in the south, in Galle, providing care solely for U.S. servicemembers deployed to the tsunami relief operations in the region. The second team, of 26 &#8212; mostly members of a Forward Resuscitative Surgical System and Shock Trauma Platoon &#8212; deployed north, to Jaffna, where they set up shop in a local hospital.

The 26-member group spent its first week in-country in Galle, said Cmdr. Tom Davis, a trauma surgeon with the team. But Sri Lanka&#8217;s government and the U.S. Embassy saw a need in the north, so the team was sent to work out of the Point Pedro base hospital in Jaffna, he said.

The medical staff was tending both tsunami victims and emergency cases that arose while the team was there, Davis said, but was careful not to do too much. The hospital has just one doctor who handles everything.

&#8220;We didn&#8217;t do elective surgeries because it would change people&#8217;s expectations,&#8221; Davis said. &#8220;We just wanted to help them do what they already were doing. That hospital does a tremendous job with the resources they have but they&#8217;re just not built to take that influx of patients.

Medical personnel from the team also did preventive care at almost a dozen &#8220;internally displaced persons&#8221; camps. Davis said they would check sanitation conditions, provide water and some minor health care. Diarrhea from unsuitable drinking water and insect-borne diseases were the biggest threats in the camps, he said.

Meanwhile, the team in Galle tended the Marines and Navy Seabees helping in that region &#8212; which meant the team was unable to provide care to local residents, said Navy Lt. John Gore, an operating room nurse with the team.

The group had no big emergencies but did treat several servicemembers with smashed fingers, Gore said.

When Davis&#8217; team left Jaffna, he said, the wards were relatively empty but the hospital&#8217;s stockroom wasn&#8217;t. He said the team helped set up supplies that were provided through nongovernmental organizations and also left its surplus of medical supplies behind for the hospital to use.

Davis said members of his team could tell the locals were glad they were there. &#8220;We did a lot of great stuff,&#8221; Davis said. &#8220;Tangible stuff that you could actually see the benefit of, and you could see that the people really appreciated it.&#8221;