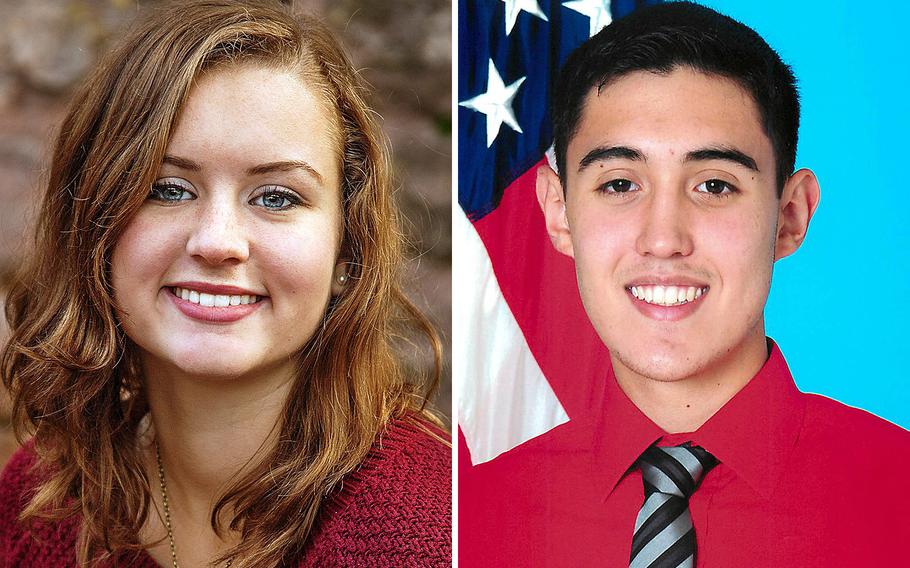 Phillip Ramirez of Vilseck High School and Avalon Roche of Kaiserslautern High School are adding another feather to their caps.

The two seniors earned $5,000 college scholarships and will represent the Department of Defense Education Activity at the 52nd annual U.S. Senate Youth Program in Washington, D.C., in March.

Only 104 juniors and seniors nationwide were selected to participate in the weeklong program — two from each state, the District of Columbia and DODEA, according to an American Forces Press Service news release.

“I’m overwhelmed,” Ramirez said in an interview. “I really can’t believe I get to go to Washington and meet our nation’s leaders. Being able to see the ins-and-outs of Congress, the executive branch, the legislative branch is going to be a great experience.”

Roche, who heard of the program when a friend applied the previous year, said she wasn’t expecting to be chosen.

“When it was announced this year, I thought, ‘well, I’ll give it a shot,’” she said.

“It’s a huge honor. I’m hoping for a really interesting week. Not many people have this opportunity, to meet kids like me from all over the United States with many different opinions and backgrounds.”

The program was created in 1962 to deepen high school students’ understanding of America’s political processes and encourage them to pursue public service careers, according to the Hearst Foundations, which funds and administers the program.

Ramirez and Roche will be immersed in Washington activities from March 8 to 15. Student delegates will attend meetings and briefings with senators and congressional staff, the president, a Supreme Court justice, leaders of Cabinet agencies and prominent journalists.

The Hearst Foundations pays for all expenses, except transportation, which is covered by DODEA.

To be eligible for the program, Ramirez and Roche had to be in an elected or appointed position representing their high school or an educational or civic organization.

Roche said she’s unsure where she’ll attend college, but she wants to study architecture and someday work for the UNESCO. She’s a Girl Scout, a member of the National Honor Society and the Model United Nations.

Ramirez would like to work in government. He’s applied to the U.S. Naval Academy, the U.S. Air Force Academy, West Point and a few Ivy League schools.

He hopes to bring back some of the lessons he learns in Washington and apply them to his job as student president.

“I’m honored to be the representative from my school – all DoDDs schools, really. It’ll be great to bring some of our world to Washington, and maybe bring some of theirs back,” he said.

Roche has already met some of her fellow delegates, virtually, via a Facebook page set up for the group.

“We’ve been having debates about government, politics, education,” she said. “It’s nice to see other kids my age have the same interest. Not all my friends like to talk about health care.”