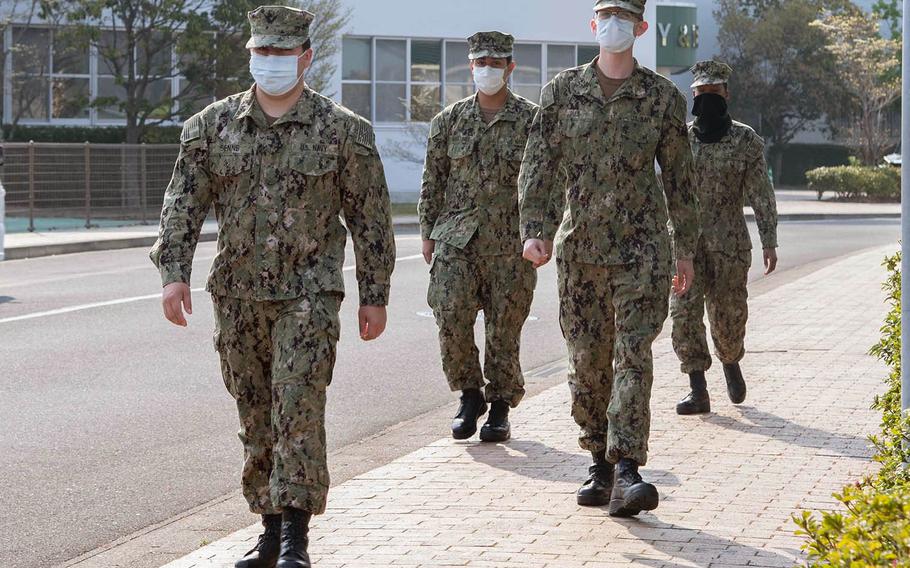 Two civilians have been barred from Sasebo Naval Base, Japan, after security personnel found them in an off-base bar in violation of rules set by the Navy and restrictions imposed to combat the coronavirus, according to the base commander.

The punishment was revealed by base commander Capt. Brad Stallings in a response to a community member’s question on Facebook Monday.

It follows warnings from U.S. military commanders in Japan that civilians may be punished for breaking rules imposed since U.S. Forces Japan commander Lt. Gen. Kevin Schneider declared a public health emergency for bases in and around Tokyo on April 6.

Security personnel checking bars and clubs frequented by Sasebo service members found the civilians in the bar on Friday, according to an email Tuesday from base spokesman Aki Nichols.

One was an American military spouse employed as a bartender in violation of base and regional prohibitions on working in an establishment whose primary purpose is to serve alcohol to the Japanese public, according to Nichols.

The other was a civilian contractor who was at the bar in violation of a mandatory 14-day movement restriction after arriving in Sasebo from the U.S., Nichols said.

“Although as civilians they did not technically violate liberty restrictions that have been implemented for Navy personnel in Japan, they exhibited complete disregard for the intent of Commander, Naval Forces Japan’s liberty restrictions which are meant to safeguard our base communities from the COVID-19 pandemic,” he said, referring to the disease caused by the coronavirus.

Stallings temporarily barred the pair from the base in southwest Japan in order to limit their exposure to base personnel and ordered both to be placed in a “restriction of movement” status. The pair could face a longer ban following administrative steps, Nichols said.

The case was the first such incident in Sasebo during the coronavirus pandemic, he said.

“The overwhelming majority of the base community understands that safeguarding ourselves from the COVID-19 pandemic is a collective effort and have chosen to abide by the various preventive restrictions we have instituted on our Navy personnel,” he said. “However, as these two cases show, there is still a small minority whose actions run contrary to our collective efforts to protect our community from the novel coronavirus.”

Instances of active-duty troops breaking the coronavirus rules in Japan, if they exist, have not been publicized by their commanders. In South Korea, however, Eighth Army in early April released details of punishment handed out to several soldiers who broke rules imposed to stop the spread of the virus there.

At Sasebo, Stallings has restricted service members’ movements to stop the virus’ spread. But without a formal declaration of a health emergency, the base commander may only urge civilian employees, contractors and family members to abide by those restrictions.

“Unless a Public Health Emergency is issued for Sasebo or all of Japan, I cannot order anyone that is not under my command, such as dependents,” Stallings said in a Facebook post.

However, he added that he can bar people from the base if he thinks they’re a threat because of where they go or who they associate with.

“What administrative action will be taken will be dealt with on a case-by-case basis, based on the totality of the circumstances,” he said.

Members of the Sasebo community should use good judgement and abide by the rules that active duty sailors are required to follow by avoiding restaurants, bars, clubs, movie theaters and any other place where there will be large groups of people, Stallings said.

“I am not looking for people to debar, to the contrary. I appreciate those doing their best to follow these difficult guidelines,” the commander said on Facebook. However, anyone whose behavior contradicts the spirit of orders from U.S. Forces Japan, Naval Forces Japan and Sasebo Naval Base “and is putting the health and safety of everyone at risk, I will be forced to limit or bar base access,” he said.

Stallings referred to a standing order prohibiting anyone, including civilians affiliated with the naval base, from working off-base in bars that serve alcohol to Japanese customers. That order covers work as bartenders, waiters, waitresses, disc jockeys, managers, bouncers, security guards or custodians.

People should stay local and keep their circle of contacts small, he said.

“The reason for this is simple, the disease does not distinguish between people on Active Duty and people not on Active Duty,” he said. “If you are a civilian and go to a bar or restaurant, you run the risk of being infected. Once infected, you run the risk of passing that on to a dependent or Active Duty person, this in turn could infect a Sailor on a ship, which in turn could infect the entire ship — not to mention you are putting your loved ones, friends and community at risk.”