Two brothers, the memory of fallen comrades, and a perilous journey across the sea 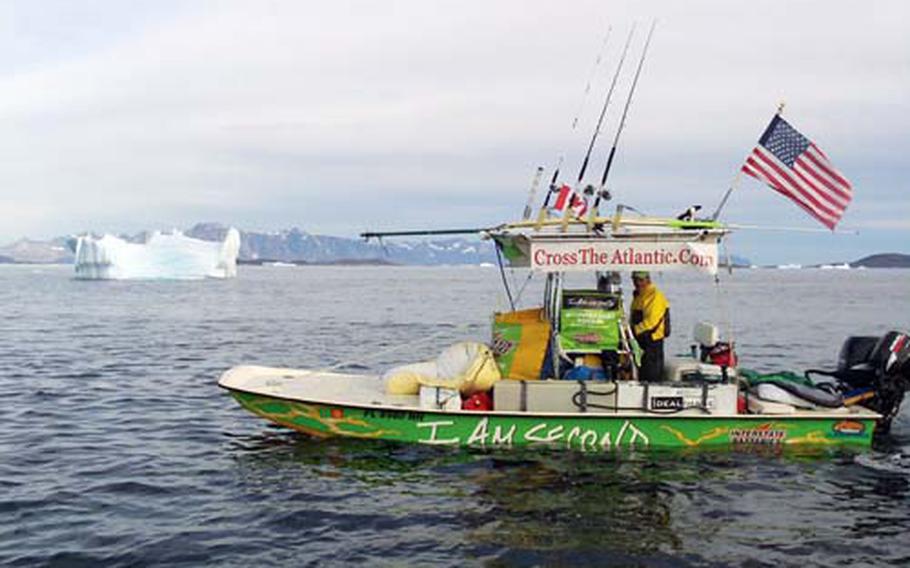 Brothers Ralph, who was a Marine, and Robert Brown took a circuitous route across the Atlantic from St. Petersburg, Fla., to Germany in this fishing boat. (Courtesy photo)

Brothers Ralph, who was a Marine, and Robert Brown took a circuitous route across the Atlantic from St. Petersburg, Fla., to Germany in this fishing boat. (Courtesy photo) 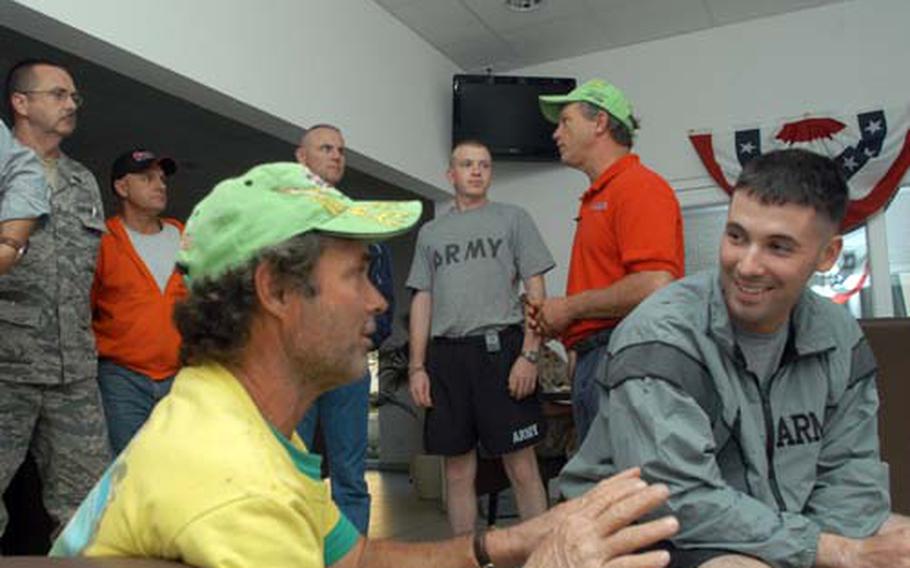 Robert Brown, left, talks to 1st Lt. Gary Brooks about his seafaring adventures with his brother Ralph on Friday. The brothers crossed the Atlantic in a 21-foot fishing boat to try to raise money for veterans organizations. (Seth Robbins / S&S)

Their faces still raw and their hands blistered from salt, Ralph, 50, and Robert, 52, told the troops on Friday how they motored across the Atlantic in a 21-foot-long flats boat, which has no cabin and is normally used for fishing in shallow waters. Theirs was the first crossing in this type of boat, the brothers say.

The brothers were caught between two rocky islands in a storm, and to make matters worse, their Global Positioning System wasn&#8217;t locating a proper signal. The boat was turning in circles, Ralph said.

Then they saw a star, which they used to guide themselves to safer waters.

For Ralph Brown, who was a Marine, the trans-Atlantic journey fulfills a 29-year-old promise not to forget three comrades who died, along with five others, in the failed 1980 operation to rescue American hostages in Iran. Ralph was scheduled to deploy in the same mission, but his unit was never sent.

Ralph hoped the voyage, dedicated to Sgt. John Harvey, Cpl. George Holmes and Staff Sgt. Dewey Johnson, would raise $3 million for veterans&#8217; organizations. Unfortunately, the brothers barely covered the costs of the $125,000 trip with donations. But Ralph is hopeful that he can still reach his goal.

The Browns launched the vessel from St. Petersburg, Fla., on June 27 and headed north, hugging the Atlantic coast because their craft was too small to withstand high seas and they needed to be near ports to get gas. They went by Canada, Greenland and Iceland before heading south in the North Sea past the United Kingdom.

They and their boat survived striking an iceberg, nearly running out of fuel miles from shore, and countless crashing waves and blustering winds. Their journey ended in Wiesbaden, Germany, where the bearded, grizzled brothers motored their beat-up craft down the Rhine River.

Ralph Brown estimates the boat sustained at least 140,000 hits from ocean swells. And his voice thundered as he described what they felt like, often using words like "wha-bam" and "smack."

"When that water hits you," he said, "It&#8217;s like getting a bathtub filled with ice water in your face."

The brothers refused rescue attempts, even when a rescue helicopter hovered over their tiny vessel shining a searchlight on them. Once, they motored 180 miles at only a few miles per hour because they were dangerously low on fuel.

"We got in with one cup of gasoline," said Robert Brown, who is a house painter but decided to go along for the adventure.

The brothers previously earned a Guinness record in 2007 after making a 1,400-mile voyage from Atlantic Beach, N.C., to Bermuda to New York harbor in the same flats boat. The boat is "unsinkable," Ralph Brown said, because it is injected with a foam product that helps keep it afloat. The boat, called the "I Am Second" Intruder, was designed by him and built at his Hudson, Fla.-based firm, Dream Boats Inc.

The vessel left Florida looking pristine. Now its canopy poles, cracked in several places, are supported by duct tape and whatever else the brothers could find, including wrenches. The deck has split from gas canisters crashing on it, and the motor is shielded by strips of cardboard.

As of Friday, the brothers were still unsure how they would return to Florida or what they would do with the boat. But that seemed insignificant as they showed the soldiers snapshots from their journey: cargo ships looming behind, icebergs floating past, skies darkening from oncoming storms, and the brothers smiling, wet and spent. To celebrate arriving in England, they cracked open some canned fruit.

"They should be proud they made it, and I appreciate it because they were doing it to help us," said Spc. Foreste Lacroix, an outpatient at Landstuhl. "It&#8217;s courageous."