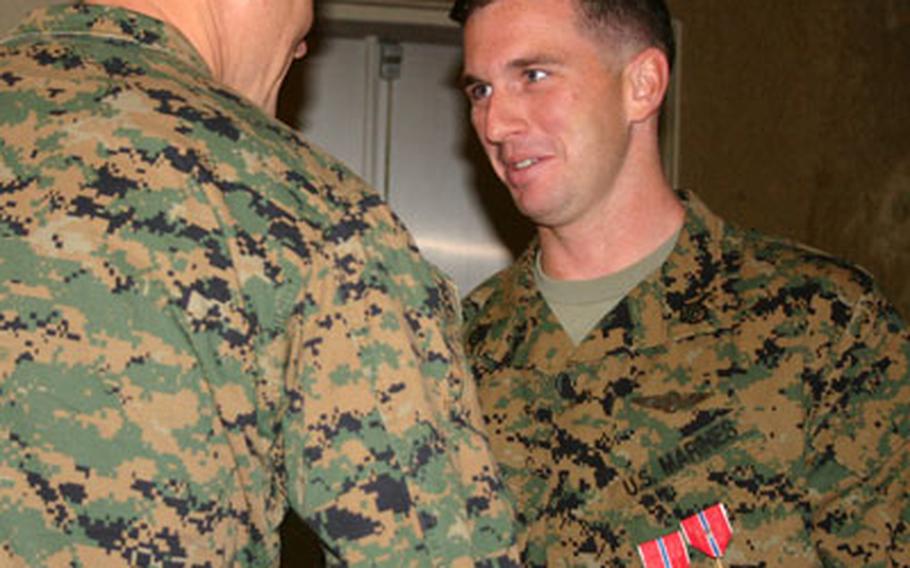 Marines congratulate Staff Sgt. Jacob B. Jones, right, an aviation operations specialist based at Marine Corps Air Station Futenma, on Wednesday after he received two Bronze Stars, one with Combat V, for a 2007 deployment to Iraq. (Cindy Fisher / S&S)

Marines congratulate Staff Sgt. Jacob B. Jones, right, an aviation operations specialist based at Marine Corps Air Station Futenma, on Wednesday after he received two Bronze Stars, one with Combat V, for a 2007 deployment to Iraq. (Cindy Fisher / S&S) 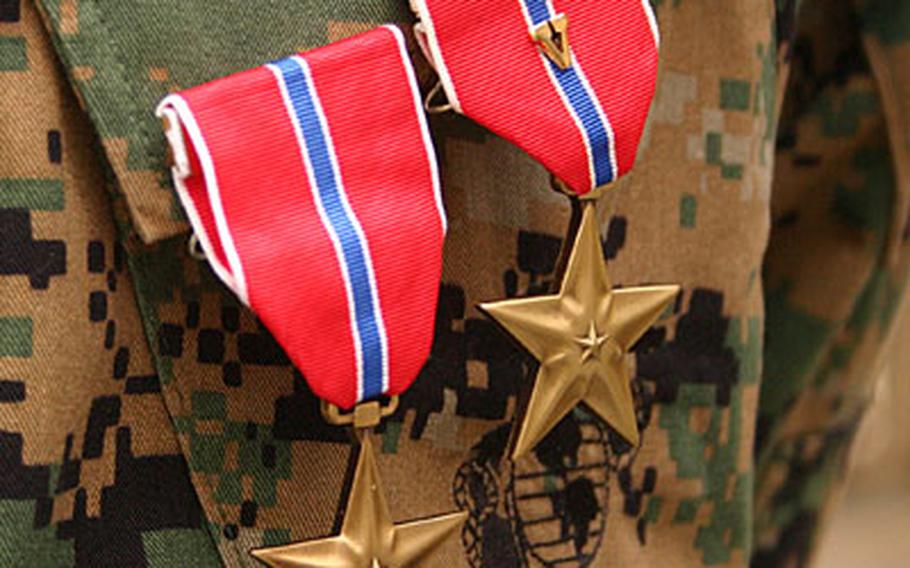 He was awarded both &#8212; one with the Combat V for valor &#8212; in a ceremony Wednesday at Marine Corps Air Station Futenma.

Jones, an aviation operations specialist with Headquarters and Headquarters Squadron on Futenma, was deployed to Iraq from March 30 to Oct. 9 as an individual augmentee. He served as an operational adviser to the Iraqi army with the joint Iraqi Ground Forces Command Military Transition Team.

Jones received the Bronze Star with valor device for an incident May 4 while at the Provincial Governor&#8217;s Building in Baqouba, where he was in charge of a personal security detail for Army Lt. Col. Timothy Small.

He had just finished morning rounds: checking the perimeter and ensuring the Iraq troops had their weapons and ammo.

As he returned to his office around 10 a.m., Jones heard bullets being fired into the building.

There, he saw that someone was firing into a group of Iraqi women and children who were at the building for medical care. Iraqi police told him it was sniper fire and pointed to a position about 200 yards away, he said. Jones looked through a window and saw &#8220;it was a bell tower kind of setup.&#8221;

To do that, Jones left the doorway and ran through a courtyard &#8212; which was exposed to the sniper&#8217;s fire &#8212; to a nearby observation post where he grabbed four bandoliers of rounds.

Jones said he wasn&#8217;t thinking about how dangerous it could be.

He fired at the new sniper as well as at the position of the original sniper, Jones said.

Military records credit Jones with killing one insurgent and gravely wounding the second.

Jones&#8217; willingness to expose himself to danger to protect others was not a one-time scenario, according to the narrative for his second Bronze Star, which was awarded for the whole deployment.

According to the narrative, in six separate engagements Jones &#8220;exposed himself to hostile fire on several occasions and personally led a patrol to clear insurgent snipers.&#8221;

Coming up through the ranks, one learns about heroes and their acts of valor in combat, but one never consider that you might be worthy of joining their ranks, he said.