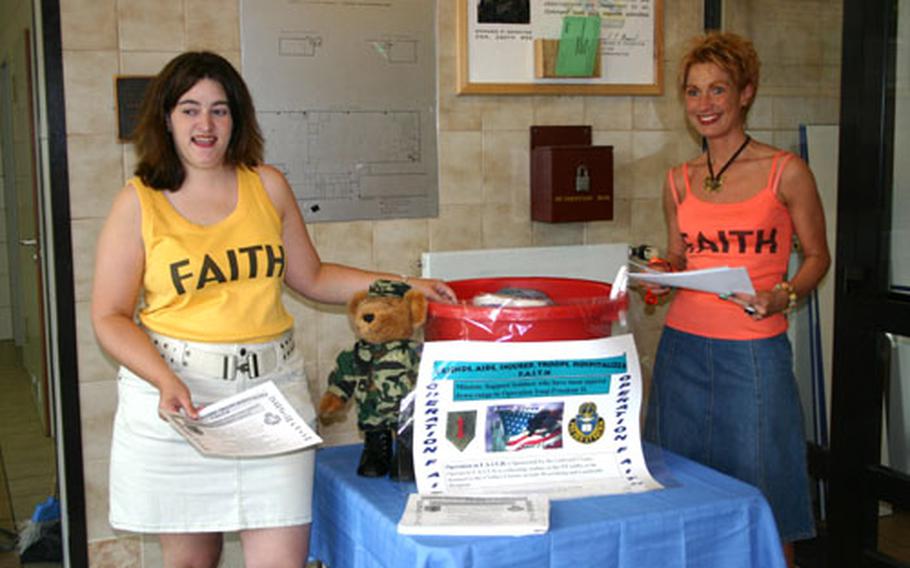 SCHWEINFURT, Germany &#8212; At one time Heather Twist spent her time acting in the theaters of South Florida. Sandra Hummel picked out dresses for celebrity clients such as Jenny Craig and Celine Dion at Saks Fifth Avenue in Los Angeles.

Then war turned their lives in a strange direction.

One day in early April, Hummel got a short e-mail from her husband, 1st Sgt. Alan Hummel, whose Company A troops are attached to Task Force 1-18 in Tikrit.

One of my soldiers is injured, he wrote. Go to Landstuhl and see him.

She invited Twist to help with the 190-mile drive. When they arrived and began navigating the crowded hallways packed with injured troops, they felt as if they&#8217;d landed on the set of a TV medical drama.

They carried a handful of snacks for Staff Sgt. Eugene Simpson &#8212; the 1-77 Armor soldier they&#8217;d come to visit &#8212; feeling naked. The troops, they said, looked scared and alone, their eyes begging for some reassurance.

So Hummel and Twist pooled their money and headed for an Army and Air Force Exchange Service shoppette. They spent all they had buying snacks, and returned to the ward to hand them out. The enthusiasm of the troops moved them to tears &#8212; some of the wounded even offered to pay them.

The two returned the following week, ready for a larger relief mission. They got permission to visit as many Big Red One soldiers as they could, distributing a trunkload of goodies they had bought.

&#8220;They were a big inspiration,&#8221; said Simpson, now in a Richmond, Va., Veterans Affairs hospital recovering from wounds suffered in a April 7 roadside bomb explosion.

&#8220;They walked around the hospital and visited with the guys, encouraging people. They brought candy, books. It seemed to make the guys feel real good.&#8221;

In the two months since, the pair&#8217;s effort has blossomed into Operation in FAITH (Friends Aid Injured Troops Hospitalized). Seeking to expand their effort, they gained the support of Lt. Col. Keith Wright, chaplain for the Schweinfurt-based 280th Base Support Battalion.

Wright said, coincidentally, he&#8217;d received a request from his counterpart at Landstuhl, asking for help in meeting immediate needs of injured soldiers who were then arriving by the planeload.

Hummel and Twist&#8217;s effort is in keeping with their strong Christian faith.

Together the women decided to focus on collecting clothes for troops newly arrived at Landstuhl. Few bring clothes or gear with them from the war zone.

For weeks now, Hummel and Twist have put up a table just outside the entrance to the AAFES store at Schweinfurt&#8217;s Ledward Barracks from noon to 4 p.m. each Thursday.

They ask passers-by to buy socks, underwear or T-shirts, and to drop them off in the Operation in FAITH box on their way out.

The women said response has been electrifying. The Schweinfurt community has been badly hurt by the war this spring, with 16 soldiers killed and dozens more injured, and it has rallied to help.

AAFES has supported their efforts by special-ordering extra clothes and displaying them prominently. Hummel said they have collected between $500 and $700 in clothes each Thursday.

Then, on weekends, the pair drives to Landstuhl and drops off the purchases at a little store where troops can pick up free clothes. They also take pastries donated by a Schweinfurt bakery for patients and staff, and continue to deliver snacks and books for soldiers.

Since April, their volunteer work has consumed them. Both recently turned down career-enhancing jobs to dedicate themselves to helping soldiers.

Both say they will continue to aid wounded troops at least until next spring, when their own husbands come home with the 1st ID &#8212; and after that, if necessary.

&#8212; For more information about Operation in FAITH contact Sandra Hummel at shoppingsandra@yahoo.com or Heather Twist at heeethertwist@hotmail.com.