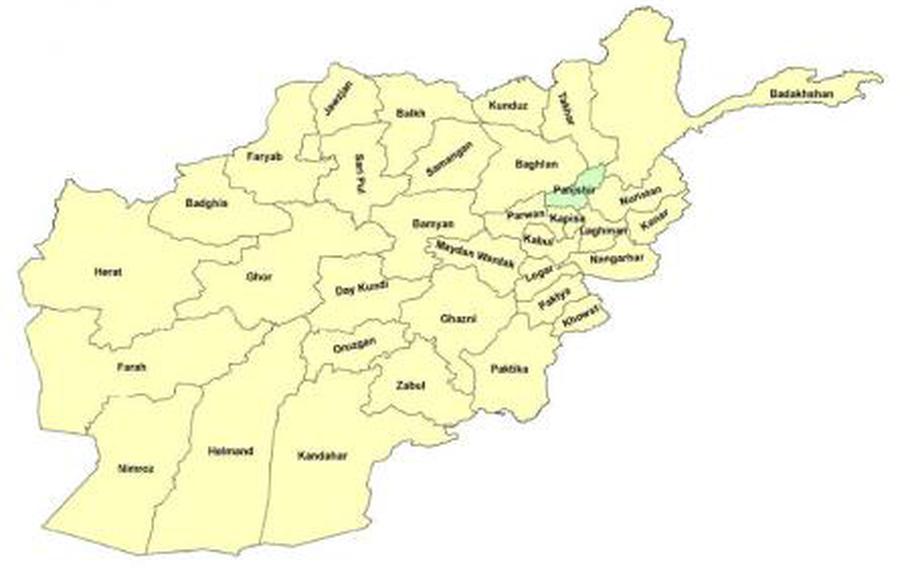 A map of Afghanistan with Panjshir province highlighted. (Joseph Bruzanowski/Courtesy of DVIDS)

KABUL, Afghanistan &mdash; A truck packed with explosives detonated at the entrance of a U.S. military base south of Kabul on Thursday, killing two Afghan security guards and rocking the capital of Paktia province.

There were no coalition casualties, according to a U.S. spokesman, but two more guards and a border police officer were wounded, Paktia&rsquo;s provincial police chief told French news agency AFP.

The blast occurred at about 6:45 a.m. at the outer gate to Forward Operating Base Gardez, headquarters of a U.S.-led provincial reconstruction team leading development projects across the province.

A coalition spokesman said the driver became frustrated when Afghan security guards denied him access to the base.

&ldquo;After the driver failed to make it through the preliminary security gate, he detonated the explosives that martyred two of the Afghan security guards,&rdquo; said Army Master Sgt. Nicholas Conner, a spokesman for Combined Joint Task Force &ndash; 1, which oversees coalition operations in eastern Afghanistan.

The vehicle used in the attack was what U.S. forces call a &ldquo;jingle truck,&rdquo; a colorfully-adorned truck similar in size to a tractor-trailer and commonly used to transport heavy freight in Afghanistan.

A Taliban spokesman claimed seven tons of explosives were used, though insurgent claims are often overblown. Nevertheless, Conner said it was the most significant attack on FOB Gardez in at least four months.

&ldquo;I can tell you that something of this magnitude, this is the first that I can remember since we took over&rdquo; in May.

A similarly large blast occurred in nearby Wardak province in July, when an estimated 2,000 pounds of explosives injured 22 coalition troops and tore a hole nearly 30 feet wide in the outer perimeter of Combat Outpost Dash-e-Towp.

Coalition forces thwarted a similar attack on FOB Gardez in September, killing the driver of a pickup truck packed with explosives before he could detonate. Two Afghan guards also died in that incident, and five insurgents were killed.