A mourner puts a flower in front of a photo of Sgt. Edward Shaffer following the memorial ceremony for Shaffer and Pfc. David Dietrich in Friedberg, Germany, on Wednesday. (Michael Abrams / S&S)

A mourner puts a flower in front of a photo of Sgt. Edward Shaffer following the memorial ceremony for Shaffer and Pfc. David Dietrich in Friedberg, Germany, on Wednesday. (Michael Abrams / S&S) Soldiers of the 1st Armored Division listen to the service records of Sgt. Edward Shaffer and Pfc. David Dietrich at the memorial ceremony in Friedberg, Germany on Wednesday for the two 1st Brigade Combat Team soldiers. (Michael Abrams / S&S) 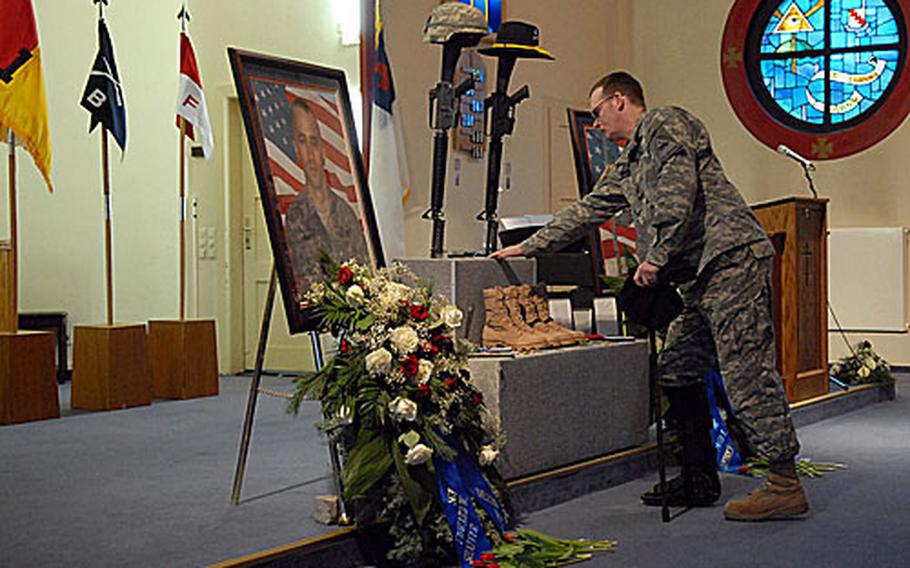 FRIEDBERG, Germany &#8212; Sgt. Edward W. Shaffer and Pfc. David E. Dietrich were both from Pennsylvania. Both were members of the 1st Brigade Combat Team of the 1st Armored Division. Both died of wounds received in Iraq.

In a memorial ceremony at Ray Barracks on Wednesday, both were honored for their sacrifice.

Shaffer, 23, of Mont Alto, Pa., died Dec. 27 at Brooke Army Medical Center at Fort Sam Houston in San Antonio after succumbing to wounds he received Nov. 13 after his Bradley fighting vehicle was struck by a roadside bomb in Ramadi. Dietrich, 21, of Marysville, Pa., died Dec. 29 in Ramadi of wounds from small-arms fire after his combat patrol came in contact with enemy forces.

Shaffer, who joined the Army as a private three years ago, had risen quickly through the ranks to become sergeant as his leaders took note of his quiet competence.

Staff Sgt. Nicholas Kruthoff, one of Shaffer&#8217;s closest friends in the 3rd Platoon, said that even though his buddy was quiet, he was one of the smartest men he ever met, and the example he set commanded respect.

As Capt. Christian G. Cook, the rear detachment commander for Shaffer&#8217;s unit, the 1st Battalion, 36th Infantry Regiment, put it, &#8220;He controlled the situation around him by simply being there.&#8221;

Shaffer had been injured by a grenade earlier in the deployment, and he could have returned to Germany, but he convinced his command to keep him downrange with his unit, Crawford said. In Iraq, his fellow soldiers were his family.

Dietrich was similarly known for his inner strength.

He had been in the Army less than a year, and joined his unit, Troop F of the 1st Cavalry Regiment (Brigade Reconnaissance Troop) in August.

Capt. Denis M. Wagner, the unit&#8217;s rear detachment commander, said he remembered when Dietrich arrived in Friedberg. He was young, new to Army life and eager to get the job done.

&#8220;And yet if you looked deep into his eyes you noticed a silent strength, something the Army cannot place in a man: the conviction to do what was right and fair no matter what the cost,&#8221; Wagner said.

Crawford noted that Dietrich had been thrown out of his grandparents&#8217; home at age 14 after having been abandoned by his parents four years earlier. But contrary to his circumstances, Crawford said, Dietrich reached out to his community and created his own family.