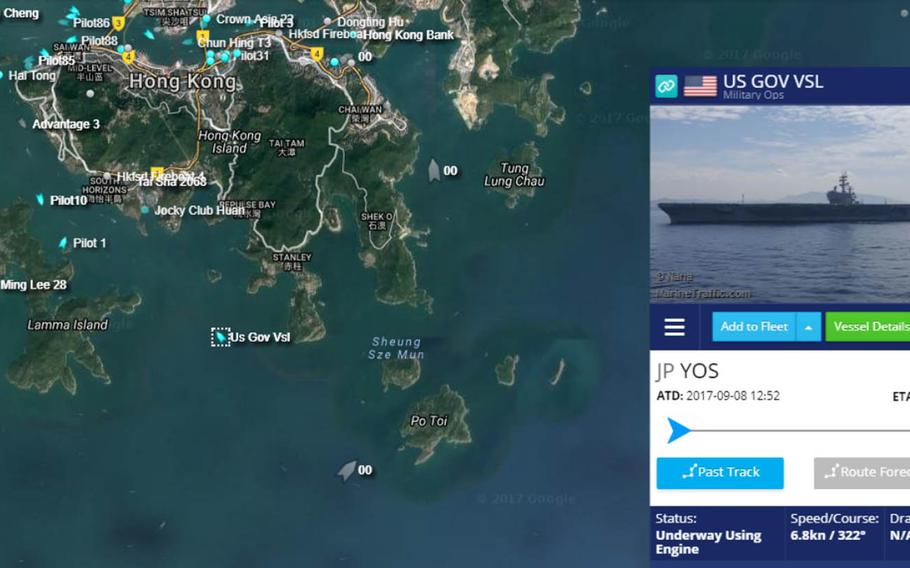 A tweet posted on Sunday, Oct. 1. 2017, that maps the location of a "US GOV VSL" approaching Hong Kong reads: "Reason to believe this is USS Ronald Reagan (CVN 76)." (Screenshot from Twitter)

Naval enthusiasts are tweeting what they believe are U.S. warship positions after commanders ordered the vessels to activate their beacons while in congested waters to avoid collisions.

The order to turn on the Automatic Identification System (AIS) locators, reported by National Public Radio on Sept. 29, follows a series of collisions that have killed 17 sailors in the Pacific in recent months.

However, it appears that the new procedure is also allowing people to track the warships online.

A tweet posted on Sunday that maps the location of a “US GOV VSL” approaching Hong Kong reads: “Reason to believe this is USS Ronald Reagan (CVN 76).”

The aircraft carrier and the guided-missile destroyer USS Chafee anchored near Hong Kong on Monday, a Pacific Fleet statement said.

NPR reported that it still isn’t clear whether the USS Fitzgerald was transmitting its AIS at the time of a June collision that killed seven sailors off the coast of Japan; however, it is known that the USS John S. McCain was not when it hit a merchant ship near Singapore two months later, killing 10.

Retired Vice Adm. William Douglas Crowder, a former 7th Fleet commander and a former deputy chief of naval operations, told NPR that Navy ships typically use locators in receive-only mode, which allows them to see other vessels using the system but doesn’t let other ships see them.

“It’s all about operational security,” Crowder said. “We don’t want to be broadcasting our exact position to everyone.”

However, Lyle Goldstein, an associate professor in the China Maritime Studies Institute at the U.S. Naval War College in Newport, R.I., said in an email that he doesn’t think America’s potential adversaries will gain much by studying warships’ AIS data.

“Chinese ISR (intelligence, surveillance and reconnaissance) would already have a rather good notion of the locations of U.S. surface ships from a variety of sources, including satellite monitoring, Skywave Radar, the large Chinese fishing and merchant fleets, as well as China’s huge Coast Guard and related maritime patrol assets,” he said.

Classic espionage techniques are also likely being used to track U.S. warships operating near places such as Singapore, he said.

“No one can imagine that US ships operate off of Hong Kong undetected,” Goldstein said.

Turning on the locators in congested waters is a prudent measure that won’t have a major impact on potential adversary knowledge of U.S. ship movements, he said.

“I would imagine that anyways there are certain sensitive zones (near Philippines and Japan for example) wherein U.S. warships will continue to operate without active beacons as before for military security purposes,” he said.