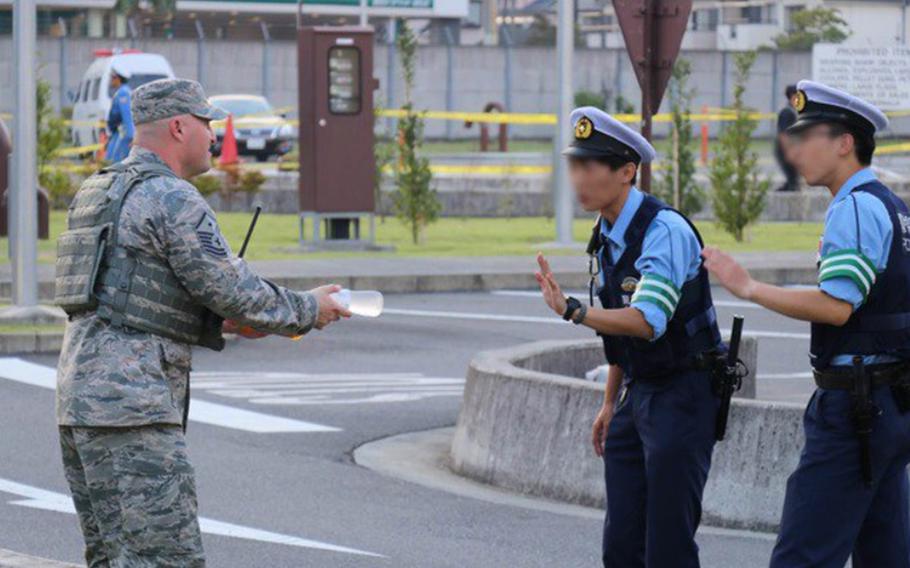 An airmen offers cold drinks to Japanese policemen during the annual Japanese-American Friendship Festival at Yokota Air Base, Japan, Sept. 16. 2018. (Screenshot from Twitter)

TOKYO — An airman’s failed attempt at gifting refreshments to two Japanese police officers made the rounds on social media last week after a Twitter user captured the “heart-warming” interaction.

A 22-year-old Japanese man named Aoki, who declined to provide his full name, said he witnessed the exchange Sept. 16 during the Japanese-American Friendship Festival at Yokota Air Base in western Tokyo. The open-base event invites the public onto the usually restricted grounds for aircraft displays, food vendors, music and other performances.

Aoki said he was walking at Yokota when he noticed three airmen approaching the on-duty Japanese officers with a bottle of water and a sports drink.

Aoki, whose Twitter handle is @Type96aoino, decided to pull out his camera and capture the moment.

“I thought it was heart-warming,” he said.

But when an airman tried to hand over the bottles, one of the officers shook his hand apologetically, Aoki said, adding that the Americans seemed surprised and walked away looking sorry and sad.

Aoki said his photo of the encounter was retweeted about 60,000 times, causing so many notifications on his Twitter account that he decided to delete it.

Most comments were positive, he said. Many people wondered why the officers didn’t accept the drinks, while others argued that they should have taken them.

Some — such as Twitter user @tuas_gennai — said the police were right to decline the gifts.

“They probably figured out that they can’t accept anything during duty since they are public servants. (Especially like this time from an U.S. servicemember),” @tuas_gennai wrote in Japanese.

Aoki, who is also a public servant, said he thought there must be a regulation that banned the officers from taking the drinks. He said you don’t see police drinking or eating on duty in Japan.