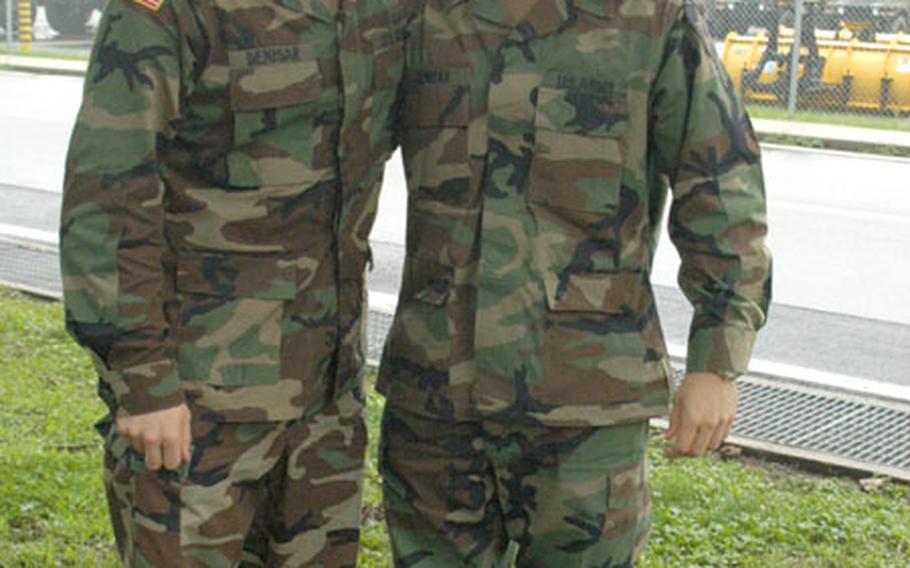 Twins Bradley and Brent Denisar say even their own parents can&#39;t tell which is which. (By Seth Robson / S&S)

CAMP RED CLOUD, South Korea &#8212; A set of twins who went head-to-head on the football field and wrestled each other to a stalemate in high school now find themselves on the same team about 35 miles from North Korea.

Second Lieutenants Bradley and Brent Denisar, who look so much alike their parents sometimes get them confused, are assigned to the 2nd Infantry Division&#8217;s Headquarters Headquarters Company at Camp Red Cloud, South Korea.

The twins didn&#8217;t ask to work together but fate had it that the Army&#8217;s complex system of assigning soldiers to various units sent both to CRC at the same time.

But the paths that led the twins to CRC were different.

They grew up in Kansas City, Mo., where they wrestled, played football and power-lifted together. Coaches inevitably made them compete against each other, even though they hated it. The matches usually ended in a stalemate, the brothers said.

Only Bradley took JROTC in high school. He said he liked it so much he convinced his brother to apply, successfully, for an Army college scholarship with him.

Brent finished college first and entered the Army seven months ahead of his brother. When Bradley graduated, the twins walked up together to receive his diploma. Bradley&#8217;s professor, who had taught him for four years, couldn&#8217;t tell them apart.

And when Bradley followed Brent into the Army, it was Brent who gave him his lieutenant&#8217;s bars.

The twins requested assignment to the Adjutants General Corps but were detailed to field artillery for three years.

Bradley got posted to South Korea first. Then Brent, who expected to go to Iraq, was sent here too. The brothers ended up working together in 2nd ID&#8217;s personnel and readiness section at Camp Red Cloud.

Twin brothers in the same office can be confusing at times.

&#8220;We both work with the same people. They keep sending e-mails to him that are supposed to go to me. On the telephone people think I am him,&#8221; Brent said.

Do the twins have a psychic link enabling them to feel each other&#8217;s pain or emotions?

So how do you tell the brothers apart?

They are both second lieutenants but Brent has been to Airborne school and wears a set of wings on his battle dress uniforms.

The pair often wonder whether they&#8217;re headed to Iraq in the near future. Both would rather go in the other&#8217;s place or together, they said.