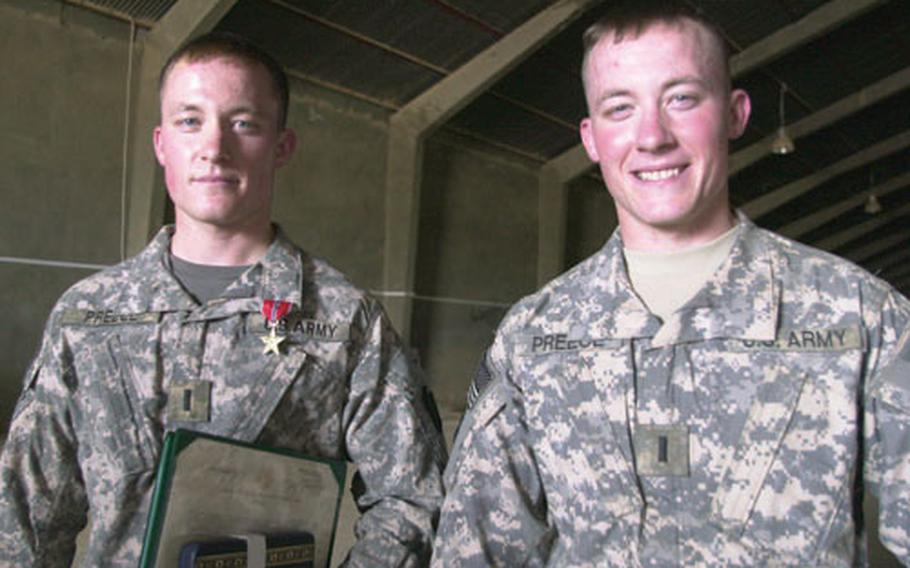 The Stryker caught fire. Preece and the men inside, Pennsylvania guardsmen with the 56th Stryker Brigade, began to crawl out of the hatches on top of the vehicle.

Preece had burns and took shrapnel from one of the two explosively formed penetrators, or EFPs, that hit their convoy about 2 p.m. on Easter Sunday along the main highway that runs north from Baghdad.

As everyone scrambled to get out, Preece saw his gunner, then-Pfc. Brian Miller, still taking his weapon apart. Preece yelled at him to move.

"He said he couldn&#8217;t because his legs were messed up," Preece said last week at Joint Security Station Falahat, a small base northwest of Baghdad that houses Iraqi soldiers, police officers and U.S. soldiers from Troop C, 2nd Squadron, 104th Cavalry Regiment.

Preece and the injured driver, Spc. Mitchell Baldwin, pulled Miller out. Within the next few minutes, Preece put Baldwin and Miller on the two remaining working vehicles and sent them toward medical care. He and a small group remained on the ground, on one of Iraq&#8217;s busiest highways, and began to look for the men who&#8217;d set off the double blast.

"He was the last one out of the truck," said Capt. John Wenzel, the Troop C commander who nominated Preece for a Bronze Star with valor. "Because of what he did, we got the trigger man."

Preece received his medal a day after his 25th birthday. His twin brother, 1st Lt. Ian Preece, was there to watch.

The twin guardsmen are both platoon leaders within Troop C. They grew up in Annapolis, Md., and are both police officers. Reed works in Frederick, Md., and Ian works for the Anne Arundel County, Md., police.

"I like it," Reed Preece said of serving with his brother. "I don&#8217;t want anything to happen to him. But I feel that way about everyone."

Four hours after the attack, and after the Stryker had burned to the ground, Preece saw his brother at the scene. But both were too busy looking for the bombers to have a reunion.

Preece said their mother worries about them during their dual deployment, which will end in September.

The attack on Easter Sunday was the third in the span of a week for Troop C, but it was the only one with casualties.

Miller and Baldwin are both recovering at Walter Reed Medical Center in Washington, D.C., Preece said. Miller&#8217;s legs are healing, and a third skin graph for Baldwin looks promising, he said.

"I don&#8217;t see why I deserve a medal more than anyone else," Preece said before the ceremony. "My guys did a great job, if you could write that in there."