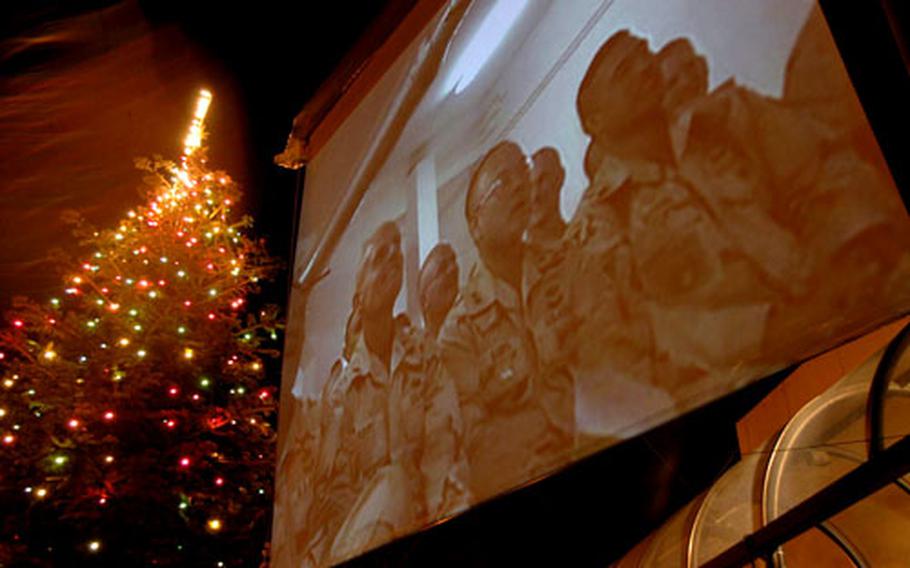 Southern European Task Force (Airborne) soldiers stationed at Bagram Air Base in Afghanistan admire the lit Christmas tree and watch the celebration at Caserma Ederle on Friday night via a video teleconference center hookup, giving them a glimpse of the holiday season back in Italy. (Kent Harris / S&S)

Southern European Task Force (Airborne) soldiers stationed at Bagram Air Base in Afghanistan admire the lit Christmas tree and watch the celebration at Caserma Ederle on Friday night via a video teleconference center hookup, giving them a glimpse of the holiday season back in Italy. (Kent Harris / S&S) 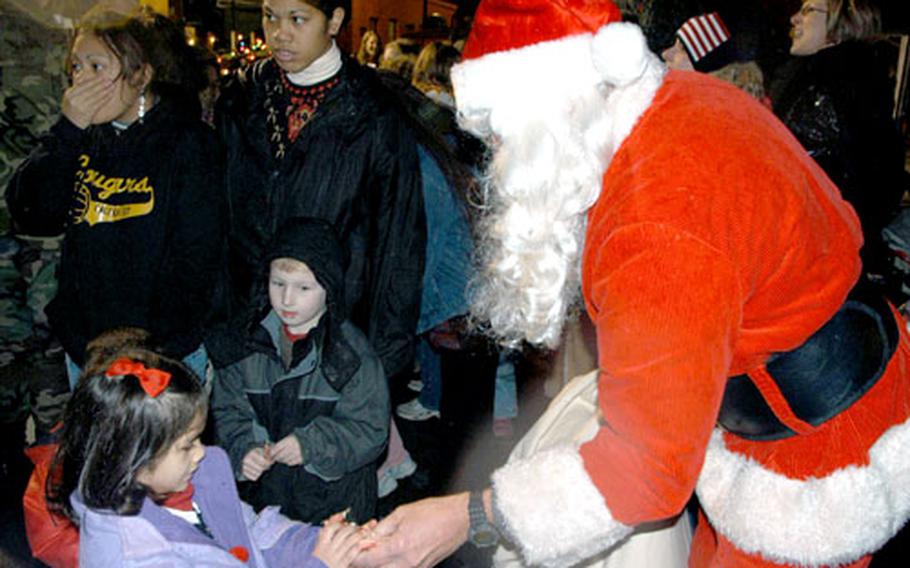 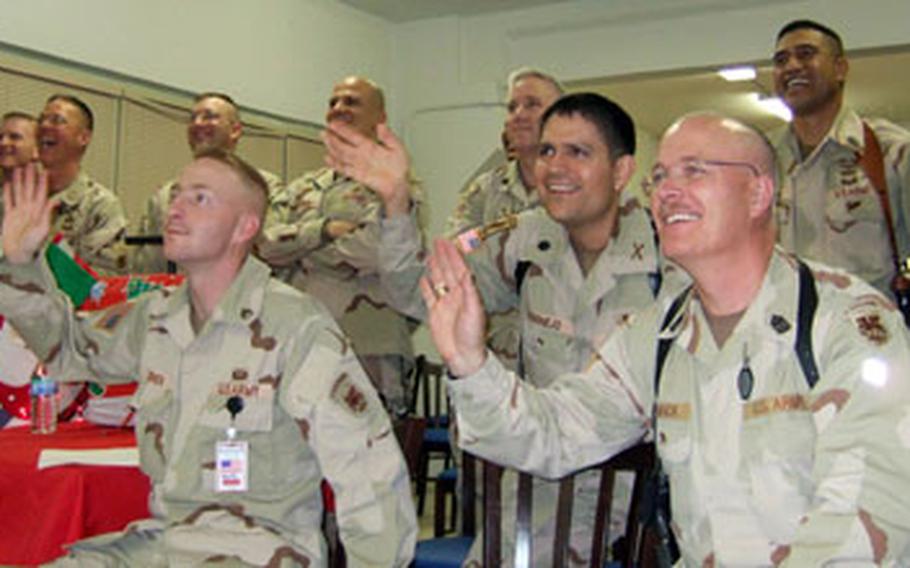 VICENZA, ITALY &#8212; For an hour or so Friday night, a few dozen soldiers were reunited with their families as the holiday season officially kicked off at Caserma Ederle.

And they didn&#8217;t even have to leave Afghanistan.

Thanks to the 509th Signal Battalion, live feeds of the American military community&#8217;s Christmas tree lighting were beamed to Bagram Air Base and Kandahar Airfield. A big screen was set up next to the tree in Italy so spouses, children and community members could see the desert-camouflaged members of the Southern European Task Force (Airborne) on the other end.

Maj. Gen. Jason Kamiya, the SETAF commander, even managed to &#8220;light&#8221; the Christmas tree from his end &#8212; simulating the event by pushing down on a giant plunger just before the lights went on.

But even Santa Claus, on hand to pass out candy to children during a cold, rainy evening in Vicenza, couldn&#8217;t make the magic last forever. Most knew they would wake up Saturday morning with their soldier dad, mom, husband or wife still deployed downrange.

That&#8217;s not a new reality for Caserma Ederle. About 3,000 members of SETAF, joined by thousands of others from units across Germany and the States, are spending a year in Afghanistan. Even more troops are away from countless communities while serving in Iraq.

Philip Perez said he&#8217;s had to take on a lot of tasks that his wife normally handles.

Those new duties, however, still don&#8217;t include wrapping gifts.

Susy Roe can relate to the present-wrapping thing.

Maj. Tom Roe did manage to help Santa with a few things for the couple&#8217;s four children while he was back in Italy on rest and recuperation leave in October.

He also got a chance to see the youngest of his children, Madeline, for the first time. She was born in August while he was deployed.

Roe, a member of the 173rd Airborne Brigade&#8217;s Headquarters and Headquarters Company at Kandahar, said his military career has given his wife a lot of legitimate reasons to complain. After all, he skipped out on their original wedding to serve in Haiti in 1994.

Susy Roe said her second Christmas in Vicenza would certainly be different from the first, when her husband was there.

Most elements of the command are expected to return to Vicenza in February and March.

That&#8217;s not the case with Spc. Jason Hoistad, a member of Headquarters and Headquarters Company of the 1st Battalion, 508th Infantry Regiment.

Wilbur-Hoistad said she knows it will be tough for her during the holidays.

Wilbur-Hoistad said the fact that she has a job and a daily routine has helped the deployment go quicker for her. The hardest part so far, she said, was her husband&#8217;s return to Afghanistan after R&R in October.

That doesn&#8217;t mean that everything&#8217;s perfect. That was evident from a conversation overheard Friday night between Santa and deployed soldiers on the other side of the video camera: