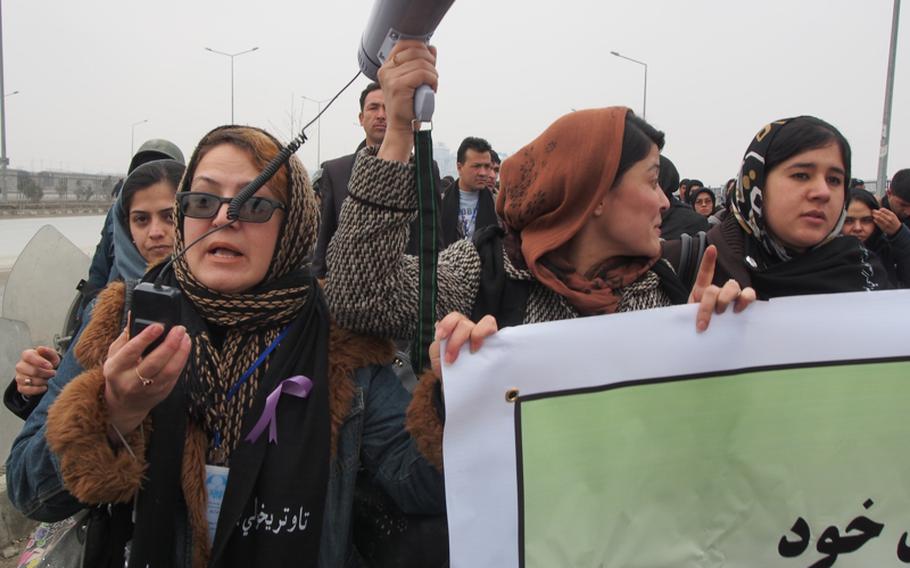 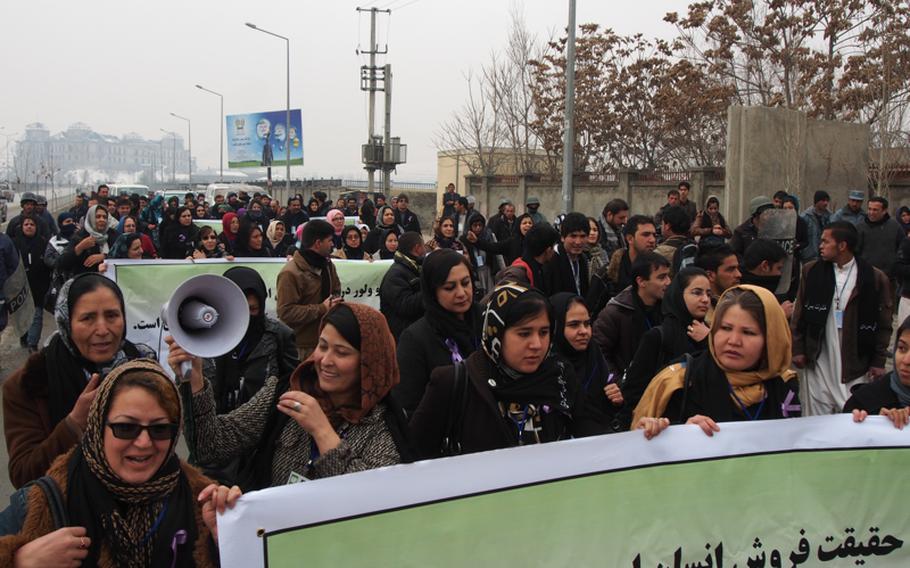 Marchers take to the streets of Kabul Thursday to call for greater women's rights in Afghanistan. Eleven years after the U.S. invaded the country, the status of women in Afghanistan remains dismal, with forced marriages and honor killings still commonplace. (Heath Druzin/Stars and Stripes) 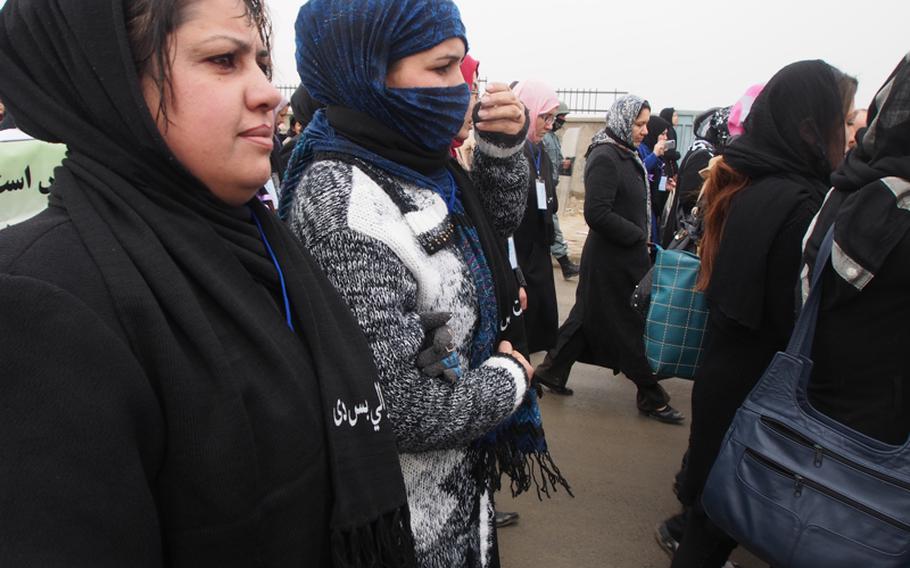 Marchers take to the streets of Kabul on Thursday to call for greater women's rights in Afghanistan. A December report from the United Nations Assistance Mission in Afghanistan noted that most crimes against women still go unreported in the country. (Heath Druzin/Stars and Stripes) 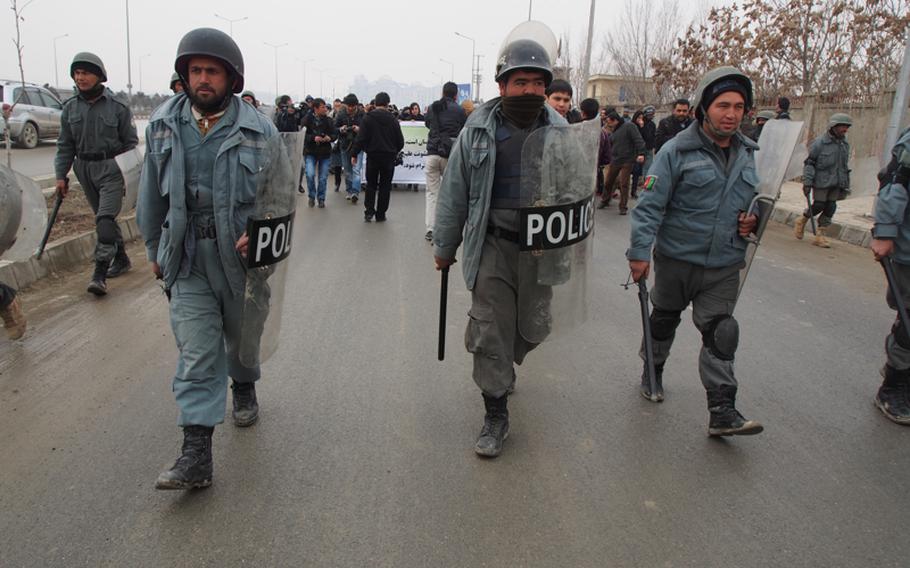 A March in Kabul on Thursday was aimed at raising awareness of women's rights and violence against women in Afghanistan. Roughly 150 protesters showed up on a dreary winter day, holding signs and chanting slogans. (Heath Druzin/Stars and Stripes) 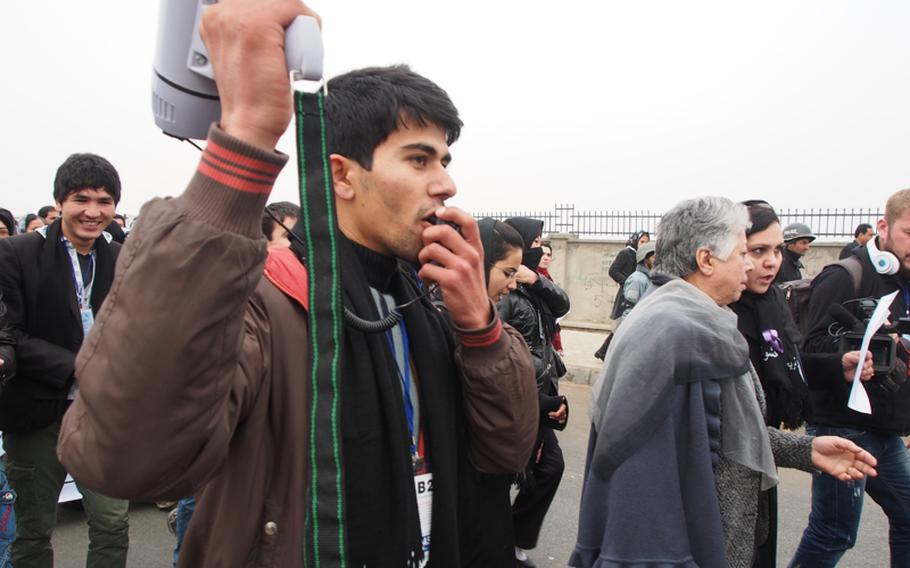 A marcher shouts slogans Thursday at a march for women's rights in Kabul. The march attracted about 150 men and women. (Heath Druzin/Stars and Stripes)

KABUL — The low attendance for a march Thursday in Kabul in support of women’s rights highlighted the continuing problems women face in Afghanistan.

Only about 150 marchers showed up, mostly activists, nongovernmental organization workers and professionals from the tiny minority of educated women in Afghanistan, to participate in the worldwide One Billion Rising event aimed at drawing attention to violence against women. Largely absent, though, were Afghan women not allowed to work, those lacking access to education, and victim of violence, the very ones most in need of reform.

Chanting slogans, like “No more violence against women, we want peace,” the mixed group of men and women marched next to one of the capital’s main thoroughfares under heavy security.

Hamid, a social worker from Kabul who participated in the demonstration, said he hopes the march sends a message but lamented that the march did not include a larger cross-section of Afghan society.

“NGO workers are taking part, but where are the victims (of violence)?” he said. “The victims need to be part of the movement. If mullahs would have participated, it would have added value.”

Still, the mood was hopeful among marchers on a dreary winter day. One of their main demands was that the government start enforcing laws on violence against women.

“Our main message is to our own government that we want justice,” said Afifa Maroof, who works for a nonprofit group in Kabul.

The status of women in Afghanistan has long been dismal, especially in rural areas, where few are educated, forced marriages are common, and those who flee abusive husbands are sometimes thrown in jail. Even in Kabul, the most cosmopolitan of Afghan cities many women still wear burqas, the head to toe covering that has become a symbol of oppression for many women around the world. Many fear if the government negotiates a peace settlement with the Taliban, it will include rollbacks of the limited rights women do enjoy.

The vast majority of crimes against women still go unreported in Afghanistan and when they are, prosecutions remain rare, according to a December report from the United Nations Assistance Mission in Afghanistan.

The focus Thursday was on violence, and a spate of high-profile honor killings and suicides has again cast a spotlight on the widespread problem.

Marcher Maria Delawari said many are concerned that any gains made in women’s rights since the U.S. invaded Afghanistan in 2001 could be threatened as the international community begins to leave Afghanistan ahead of the deadline for all coalition combat troops to leave at the end of 2014. The march, she hopes, will raise awareness not only for those in power, but also regular Afghans.

“It gives all the people the message to stop the violence,” she said.

Some at the march were also angry about women killed in coalition airstrikes, an anger stoked by reports that a strike in Kunar province Tuesday killed 10 civilians. Officials with the NATO-led International Security Assistance Force say they are investigating the incident and ISAF released a statement saying commander Gen. Joseph Dunford met with Afghan President to “express his personal condolences for any civilians who may have died or been injured as a result of the operation.”

“We came here to raise the voice of women who were killed by bombings of the coalition forces,” Mohammad Shafik Sherani said.