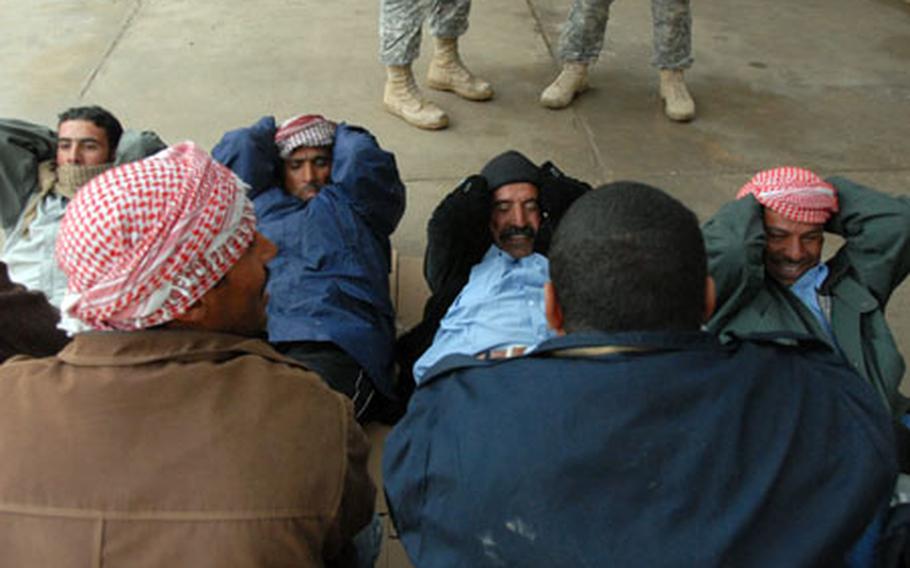 Iraqi police recruits do sit-ups, which is part of the physical fitness test required to become part of the police force. (Megan McCloskey / S&S)

Iraqi police recruits do sit-ups, which is part of the physical fitness test required to become part of the police force. (Megan McCloskey / S&S) 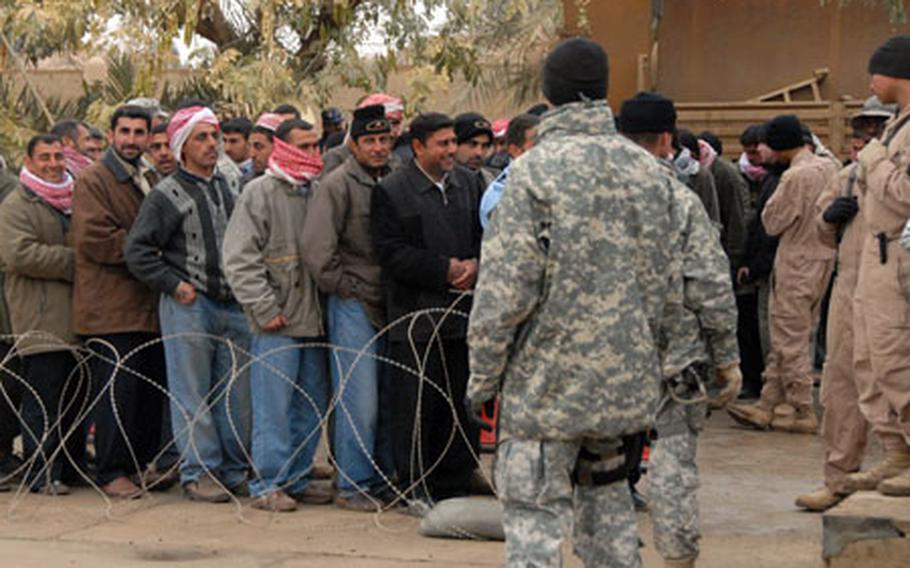 Police recruits wait in line to be screened at Camp Blue Diamond. Qualified applicants were then sent to training in Jordan. (Megan McCloskey / S&S)

CAMP BLUE DIAMOND, Iraq &#8212; The Iraqi police hopefuls come by the truckload, standing elbow to elbow in the back.

A few enterprising Iraqi army soldiers sell candy and cigarettes to those who are waiting in line to take the tests that will decide whether they can be a police officer.

During the three days of recruiting more than 400 men will go through the system.

That number has skyrocketed from the near single digits that showed up earlier this summer. The increase parallels the recent trend of tribal sheiks reaching out to work with coalition forces and fight insurgents.

As a result, there has been &#8220;a massive infusion of Iraqi security forces in the Ramadi area,&#8221; according to Col. Sean MacFarland, commander of 1st Brigade Combat Team, 1st Armored Division.

The active involvement of tribal leaders has been a crucial component of the recent success in police recruiting, which has stumbled in the past.

The Army also moved recruiting from a dangerous area outside the wire to the relative safety of Blue Diamond, making the monthly recruiting session a full military operation.

Every road is watched by a Bradley tank and fighter jets fly overhead, according to Sgt. 1st Class Jeff Estes, who is in charge of the recruiting at Blue Diamond.

&#8220;[Police] recruiting and opening stations is priority No. 1 for the brigade right now,&#8221; said Capt. Daniel Hensley, who, like Estes, is attached to the 1st AD with 2nd Battalion, 152nd Infantry, an Army National Guard unit from Muncie, Ind.

The process takes about two to three hours for each recruit. There&#8217;s a security screening, a medical screening, and a physical fitness test that consists of 10 push-ups, 10 sit-ups and three 20-yard dashes.

Recruits also undergo a literacy test. No one can join without being able to read and write. Qualifying recruits are shipped to Jordan for six weeks of basic training.

In the beginning, the men would return home before going to Jordan, but that was akin to suicide, Iraqi border police Col. Yousef Tariq said, adding that just suspicion of collaborating with the coalition was enough to get one killed.

Now, for safety, they&#8217;re bused to the airport straight from Blue Diamond when the three-day session comes to end.

When the men return, they do a week of region-specific training before starting work, with the majority going back to police their own neighborhoods, Hensley said.

There have been some sticky issues, mainly with pay. Coordinating with the government in Baghdad often means police officers don&#8217;t get paid for months at time.

At the Albu Faraj station in Jazeera, for example, the men didn&#8217;t get their first glimpse at compensation until just a couple of weeks ago, four months after the station opened in September.

&#8220;They still came to work everyday. Still cleaned their weapons,&#8221; said Sgt. Jason Taylor, who is with the Police Transition Team for Albu Faraj.