Turnout for Casey protest is far less than anticipated 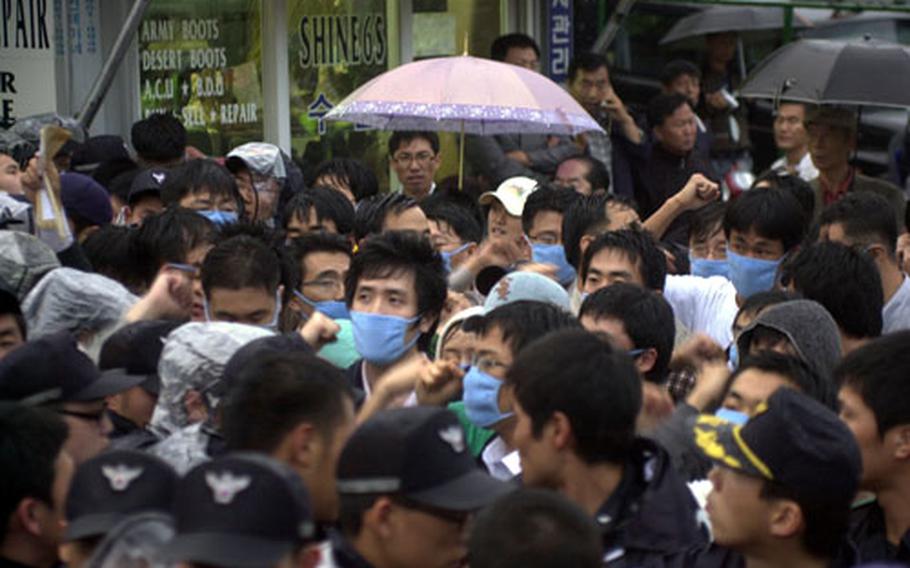 A portion of the 700 South Korean riot police on scene brace against shoving protesters Saturday in the parking lot outside Camp Casey. Between 75 and 150 anti-U.S. military demonstrators attended, far less than the 1,000 expected early last week. They called for prosecution of a U.S. soldier on arson charges and revisions to the Status of Forces Agreement. (Erik Slavin / S&S)

At least one anti-U.S. military protester briefly attacked U.S. soldiers entering Camp Casey&#8217;s main gate; however, the attackers were subdued and the soldiers were not injured, base security officials said.

Members of the pro-U.S. military Dongducheon Merchant Association observed the protesters but did not organize a formal counter protest.

About 700 South Korean riot police lined the streets and surrounded the protesters in the parking lot outside Camp Casey&#8217;s main gate.

They later roped off the sidewalk running along the base as the protesters marched toward Gate 2, where the crowd dispersed shortly after dark.

Mostly young adults and a few families sat in front of a stage in the parking lot outside Camp Casey, watching musical acts and listening to speakers rail against the Status of Forces Agreement.

The SOFA allows servicemembers accused of a crime to be returned to U.S. custody while pending investigation and trial, with exceptions for murder and a few other heinous crimes.

A sign above the stage called for &#8220;the U.S. soldier to face arson charges,&#8221; according to a South Korean soldier attached to the U.S. Army.

The sign referred to Pvt. Dustin T. Roper, who was found outside a burning beauty shop near the Camp Hovey gate at 3:55 a.m. on May 19.

A convenience store camera nearby caught Roper breaking flower pots in front of the shop but did not show him setting the fire, police said.

Military police were scouting the New Town neighborhood &#8212; also off-limits to U.S. soldiers Saturday &#8212; at that time to determine its safety, he added.