Turning the fight over to the Iraqis An unidentified Iraqi soldier provides perimeter security during a walking patrol through a small hamlet near Hawijah, Iraq. Since April, the U.S. military in Iraq has stepped up its efforts to train and mentor Iraqi security forces. (Kevin Dougherty / S&S)

An unidentified Iraqi soldier provides perimeter security during a walking patrol through a small hamlet near Hawijah, Iraq. Since April, the U.S. military in Iraq has stepped up its efforts to train and mentor Iraqi security forces. (Kevin Dougherty / S&S) 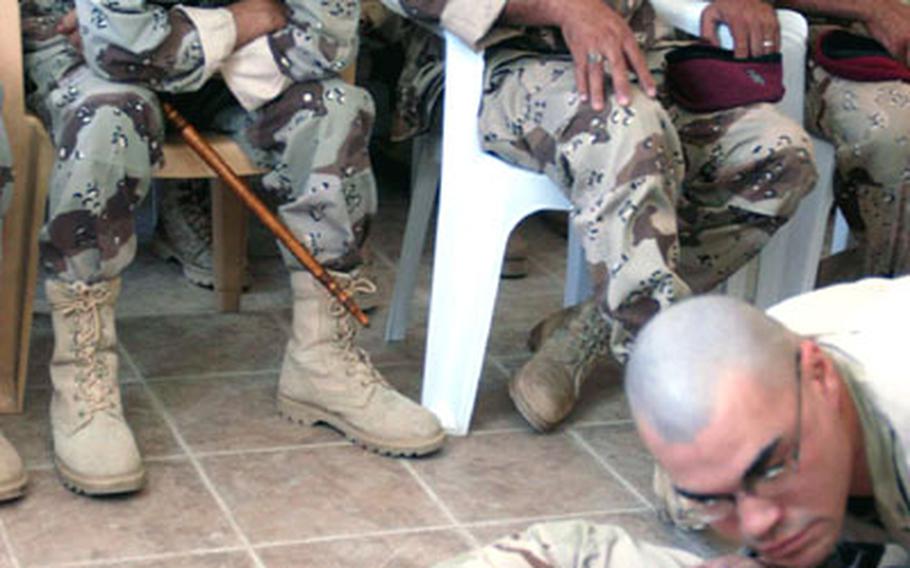 Army Sgt. 1st Class Joe Lammers (on his belly) plays the role of a prison detainee as one of his soldiers demonstrates a hold for Iraqi prison guard recruits in Kirkuk, Iraq. In the first row are Iraqi officers. (Kevin Dougherty / S&S) 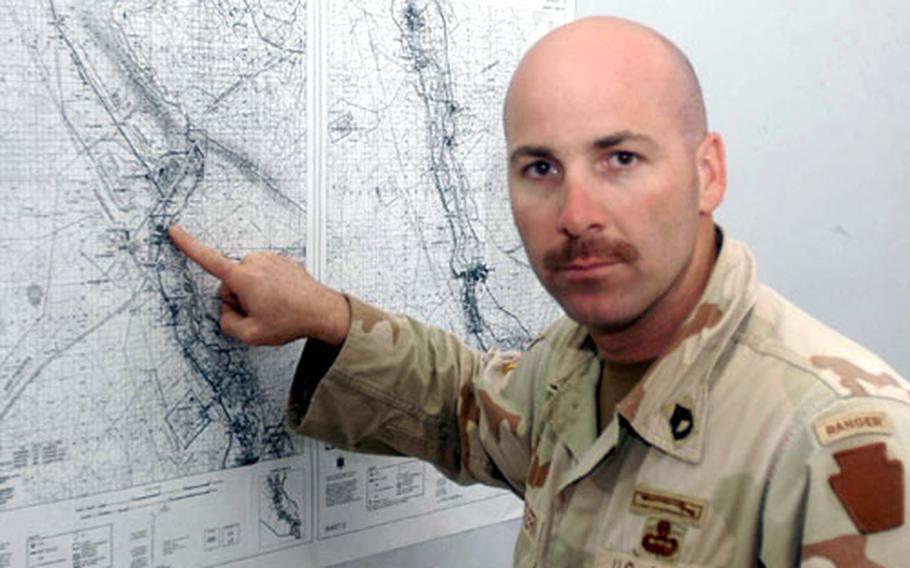 Iraqi police recruits march on to another phase of their training at the "Island" on Forward Operating Base Danger in Tikrit, Iraq. (Kevin Dougherty / S&S)

(First in a series on training Iraqi security forces.)

BAGHDAD, Iraq &#8212; There&#8217;s a directive that T.E. Lawrence penned in 1917 that is part of a classified briefing members of the U.S.-led training effort give to distinguished visitors. It reads:

&#8220;Do not try to do too much with your own hands. Better the Arabs do it tolerably than that you do it perfectly. It is their war, and you are to help them, not win it for them.&#8221;

At present, &#8220;their war,&#8221; to apply Lawrence of Arabia&#8217;s words specifically to Iraq, is really more about opportunity. Iraq has the chance to shed its authoritarian past for a more pluralistic society, one anchored by tolerance, equality, human rights and the rule of law.

But the Iraqi people didn&#8217;t ask for this societal transformation, and many, either due to ignorance or obstinacy, have been less than enamored by it ever since it rolled up to their doorstep 27 months ago. A number of Iraqis still pine for the days of Saddam Hussein. Many aren&#8217;t yet sure what to think of the makeover. And still others, including some in the fledging security forces, seem to welcome the changes and the promises they hold.

If one were to grade the success of the mission to rebuild and retool Iraqi security forces &#8212; the real keys to peace and economic prosperity, not to mention getting U.S. forces home &#8212; it would be couched with all sorts of qualifiers. When asked to assess the situation, U.S. troops routinely spoke of the need for time and patience.

Asked if the Iraqis are receptive to what the U.S.-led coalition is doing, Army 1st Sgt. Everett Sloan, a gruff and tough former drill sergeant, pondered the question as he drove full bore through the streets of Kirkuk.

Not to mention a lot of money. By the fall of 2006, the United States will have spent at least $10.6 billion to train and equip Iraqi security forces.

U.S. military officials, in particular those assigned to Multi-National Security Transition Command-Iraq, or MNSTC-I (pronounced min-sticky), repeatedly say the ultimate goal is to train, mentor and step aside. As the first two elements in that sequence mature, the U.S. military will step further into the shadows, closing camps and coalescing at several main operating bases. Essentially, that is the exit strategy, though the distance from here to the door remains unclear, partly for security reasons and partly due to the whims of war.

The goal of the third installment of Operation Iraq Freedom &#8220;is much more transitional&#8221; than past rotations, said Army Maj. Richard Goldenberg, spokesman for the 42nd ID. &#8220;The intention is to turn the country&#8217;s insurgency fight over to Iraqi security forces. We want to train ourselves out of a job.&#8221;

One significant step towards the end is the fielding of military and police training teams. The U.S.-led coalition is well into the process of dispatching advisory teams &#8212; usually about 10 individuals &#8212; to various Iraqi units, typically at the battalion, brigade and division level.

Lt. Col. Alden Saddlemire, a division intelligence officer, said sending advisory teams into the field is a logical step, one that should be complete in a couple of weeks. He has little doubt that most Iraqi units will continue to grow and improve as they assume more responsibility for their own defense.

Some Iraqis, though, doubt their security forces are up to the task &#8212; at least at this time.

Gen. Ahmed Gharib Muhammed Amin, the commander of the Iraqi Border Police brigade for Sulaymaniyah province, said during an interview in May that Americans aren&#8217;t as interested in their Iraqi allies&#8217; opinions as they claim. He cited several missteps, starting with the disbandment of the Iraqi army by the old Coalition Provisional Authority.

He wishes U.S. forces would maintain its current troop strength in the north for a couple of more years. In other areas, he said, U.S. and coalition forces should stay for even longer.