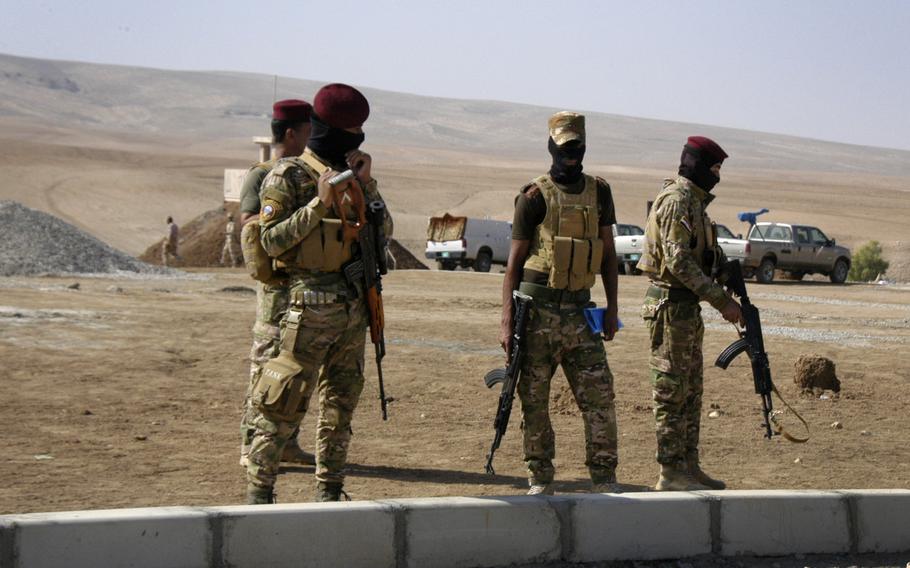 Many National Mobilization Unit members in Iraq wear masks to hide their identities. Some have relatives living in Islamic State-controlled Mosul and fear retaliation if their identities are revealed. (Seth Robson/Stars and Stripes)

Many National Mobilization Unit members in Iraq wear masks to hide their identities. Some have relatives living in Islamic State-controlled Mosul and fear retaliation if their identities are revealed. (Seth Robson/Stars and Stripes) National Mobilization Unit members in Iraq often wear masks to hide their identities. Some have relatives living in Islamic State-controlled Mosul and fear retaliation if their identities are revealed. (Seth Robson/Stars and Stripes) 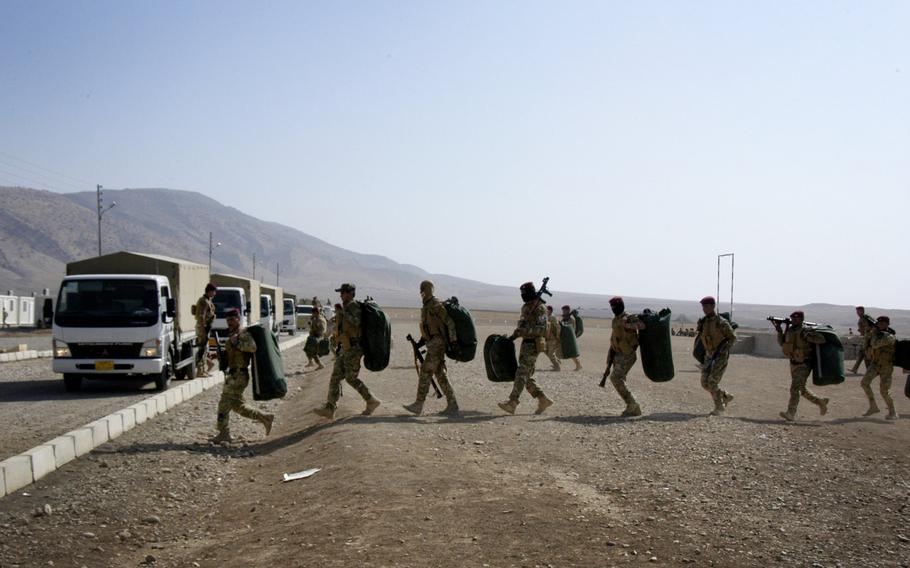 National Mobilization Unit members board trucks and armored cars that will take them to the front to observe Islamic State positions near Mosul, Iraq. (Seth Robson/Stars and Stripes) 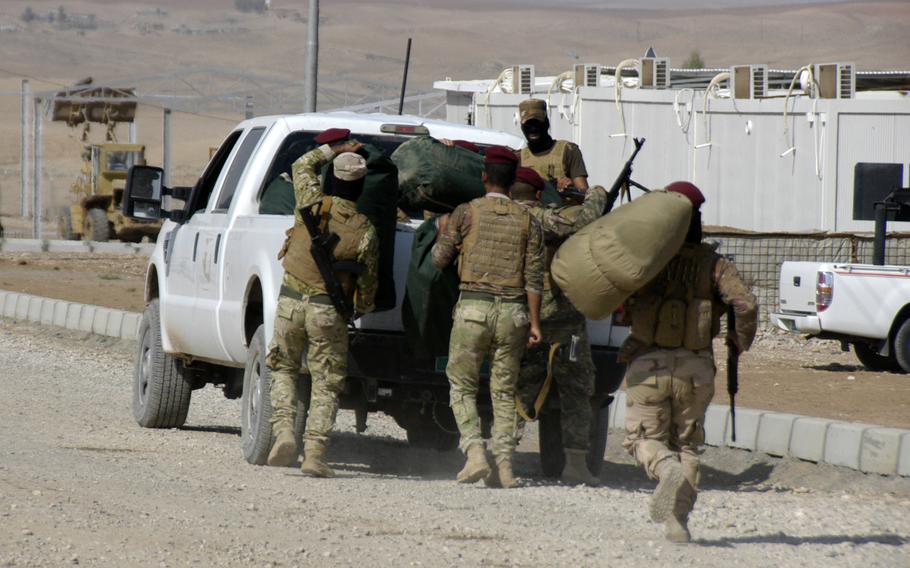 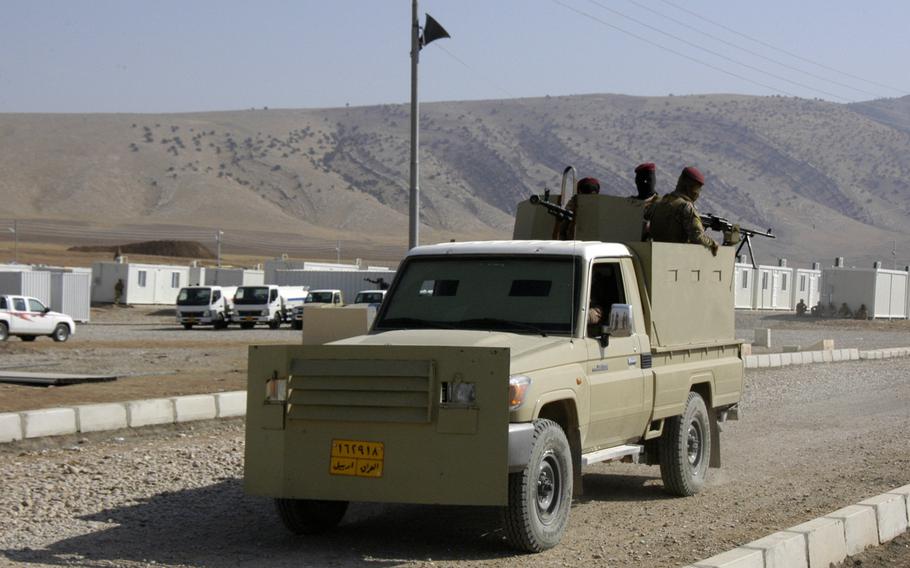 National Mobilization Unit members are training to retake Mosul from the Islamic State at a camp just more than 10 miles from the city in northern Iraq. (Seth Robson/Stars and Stripes)

BASHIQA BASE, Iraq — A cluster of white, prefab structures in a barren moonscape of Iraqi Kurdistan has become the new flashpoint in the struggle for influence among regional powers that complicates the fight against the Islamic State group.

Since last year, Turkish troops have been at this base near the Islamic State-occupied city of Mosul, quietly training a 6,500-strong militia made up of Sunni Muslim, Christian and Yazidi volunteers. But the arrival of additional Turkish troops and tanks this month triggered a political firestorm in Baghdad, where powerful Shiite militias have been complaining about the role of foreign troops, including Americans, in the war.

The flap illustrates the complexity of the war in Iraq, where several countries, including the U.S. and Iran, are supporting the Iraqis against the Islamic State while at the same time competing for influence — often against one another. Shiite militias that criticize the Turks and the Americans in fact have welcomed help from Iranian military advisers.

Turkey said the additional troops were necessary to protect the base — a point underscored when Turkish and Kurdish authorities announced that three Sunni fighters were killed and several Turkish soldiers were wounded in a rocket attack Wednesday.

Under pressure from the U.S. and Baghdad, the Turks removed a small number of troops from this camp at the foot of Mount Alfaf but insisted others would remain because their presence had been approved by Iraqi Prime Minister Haider al-Abadi’s government.

Caught in the middle is Abadi, a Shiite politician whom the U.S. is counting on to build a strong, inclusive government to defeat the Islamist extremists and to prevent the extremists from rebounding, as they had after the Americans withdrew all their troops from Iraq in 2011.

Since the dispute with Turkey over its presence here boiled over this month, the controversy over the role of foreign forces has spread beyond the Turks. On Wednesday, Abadi turned down an offer from U.S. Defense Secretary Ash Carter to accelerate the fighting against the Islamic State in Ramadi by using U.S. Apache attack helicopters and additional military advisers embedded with Iraqi forces.

To try to lower the political temperature, Vice President Joe Biden telephoned Abadi on Wednesday to assure him that Washington was committed to “maintaining its sovereignty and territorial integrity,” according to an Iraqi statement.

All this seems far removed from this barren, remote camp between Mosul and the Kurdistan capital of Irbil.

The militia undergoing training here was raised and equipped by Atheel al-Nujaifi, a Sunni who was fired as a provincial governor after Mosul fell to the Islamic State in 2014. Al-Nujaifi has long been at odds with powerful Shiite politicians who form the political base of the prime minister, who is backed by Washington.

Perhaps because of differences with al-Nujaifi, neither the Shiite-dominated central government in Baghdad nor the Kurdish peshmerga command in Irbil has enthusiastically embraced the militiamen, who go through a month of training but are then sent home to await a call to muster.

The militia, known as Hashed al-Watani, or National Mobilization Group, looks a lot like a regular Iraqi unit. Its members, many of whom fled Mosul last year, are equipped with AK-47 rifles, rocket-propelled grenade launchers and light machine guns and wear crisp new camouflage uniforms with Iraqi flag patches.

During a visit by Stars and Stripes in October, several hundred militia members marched through their camp near the town of Bashiqa, humped rucksacks onto the backs of trucks and headed for the front lines to survey terrain where they expect to fight when the order comes to retake Mosul.

Some covered their faces with black masks to hide their identities lest the Islamic State recognize them and seek vengeance on loved ones in Mosul. Their battle wagons are commercial trucks, up-armored with steel plates.

The Turks provide basic infantry training for 500 men at the camp each month; 6,500 have been trained this year. The troops learn hand-to-hand combat, marksmanship, how to fire rocket-propelled grenades and small-unit tactics. About 1,000 have been selected for special forces training, which lasts eight weeks, al-Tal said.

One of the Yazidi troops training with the militia — Bibo Hasan, 24 — lived in a village about a 30-minutes drive from Mosul when the militants arrived with a cry of “Allahu akhbar” (God is great) at 4 one morning.

“The rich people ran away when they heard the Islamic State was coming, but I am poor, so I stayed at home,” he said. “I was afraid, but I went to get my gun and joined with the town security” before fleeing to Kurdistan.

Al-Tal insisted that his mixed force would be more effective in the fight for Mosul than mostly Shiite Iraqi army units and their Shiite militia allies.

“People fear the Shiite militia more than the Islamic State,” he said. “If they come to Mosul, they will kill everyone. Mosul will be finished.”