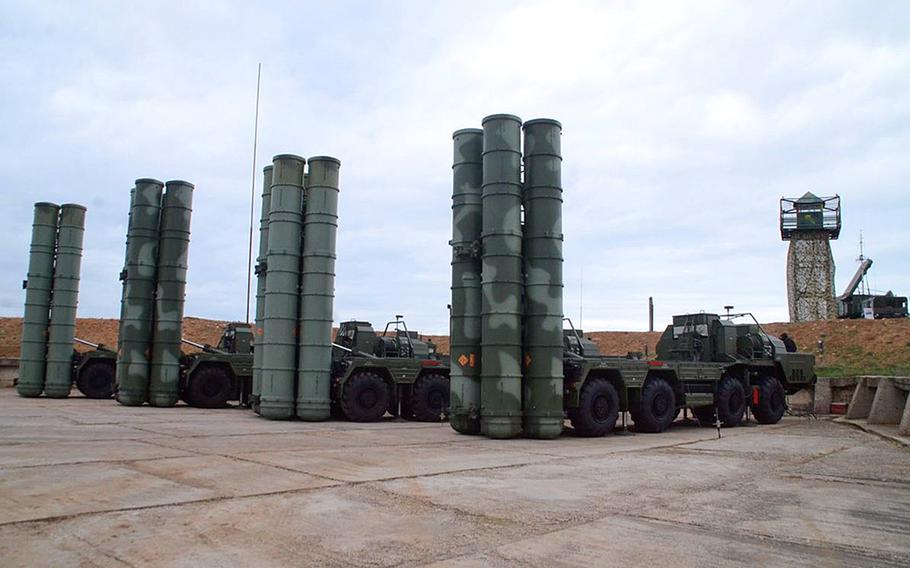 A row of Russian S-400 surface-to-air missile launchers during an exercise at Sevastopol, on the Crimean Peninsula, in 2018. Turkey's plan to buy the Russian system has caused tension with the U.S. and its NATO partners. (Courtesy Russian Ministry of Defense)

A row of Russian S-400 surface-to-air missile launchers during an exercise at Sevastopol, on the Crimean Peninsula, in 2018. Turkey's plan to buy the Russian system has caused tension with the U.S. and its NATO partners. (Courtesy Russian Ministry of Defense) 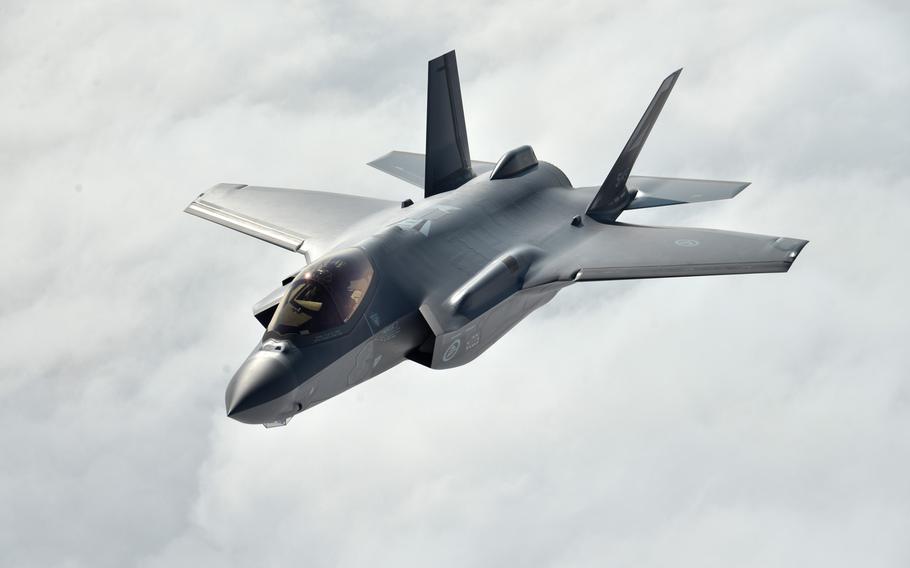 A Norwegian air force F-35 flies over Norway in August 2018. Turkey's insistence on moving forward with its plan to buy Russian S-400 surface-to-air missiles has provoked threats from top U.S. officials, who warn that could mean the cancellation of a deal to sell F-35 fighters to Ankara. (MICHAEL ABRAMS/STARS AND STRIPES)

STUTTGART, Germany — The president of Turkey said Wednesday that his country’s plan to acquire a Russian air defense system has been finalized, marking the latest rejection of a demand by Washington that the NATO ally abandon its deal with Moscow or face consequences.

“The agreement concerning the S-400 [missile system] is a done deal,” President Recep Tayyip Erdogan told Turkish reporters after a meeting with Russian President Vladimir Putin. “We are today at the point of delivery.”

Turkey’s insistence on moving forward with the missile order has provoked threats from top U.S. officials, who warn that the deal would mean the cancellation of a plan to sell F-35 fighters to Ankara. Turkey’s standing inside NATO itself also could be in play.

“Turkey must choose,” Vice President Mike Pence said last week on the sidelines of a NATO meeting in Washington. “Does it want to remain a critical partner in the most successful military alliance in the history of the world or does it want to risk the security of that partnership by making reckless decisions that undermine our alliance?”

U.S. military leaders have said the S-400 is incompatible with NATO systems and risks giving Moscow access to sensitive F-35 technology that could give Russia an edge in countering the stealth jet.

Last week, Air Force Gen. Tod Wolters, nominated to serve as the next head of U.S. European Command and NATO supreme allied commander, also said Turkey should not be allowed to have both U.S. and Russian systems, calling the idea “unsustainable.”

But so far, Turkey has dismissed the U.S. ultimatum, saying it believes it can have it both ways: own the Russian system and maintain its status as a NATO member. Erdogan said the S-400 is slated for delivery in July, but the timeline could be moved up.

Turkey also says the deal shouldn’t stop it from gaining access to the F-35. Ankara has ordered 100 of the fighters, the first three of which have been delivered to Luke Air Force Base, Ariz., where four Turkish pilots are training on the aircraft.

However, a group of U.S. lawmakers are warning Turkey will be sanctioned as an adversary if it follows through with the S-400 deal.

Historically, the U.S. has had an up-and-down relationship with Turkey, but the strain has worsened in recent years, with disagreements over how to deal with Kurdish fighters in Syria. Before that, Ankara also was criticized for not doing enough to stop the flow of foreign fighters passing through Turkey during the civil war in Syria.

Now, Erdogan’s more frequent overtures to Moscow are a source of concern. Still, maintaining relations with Turkey has been a top NATO priority for Washington. One reason is Turkey hosts U.S. troops at the strategic Incirlik Air Base. The U.S. Army also operates a missile defense radar in a remote part of eastern Turkey.

Still, some former U.S. military leaders and security analysts have warned that Turkey has become too unreliable and that the time has come to look for alternative basing arrangements in the region in countries such as Jordan and Greece.