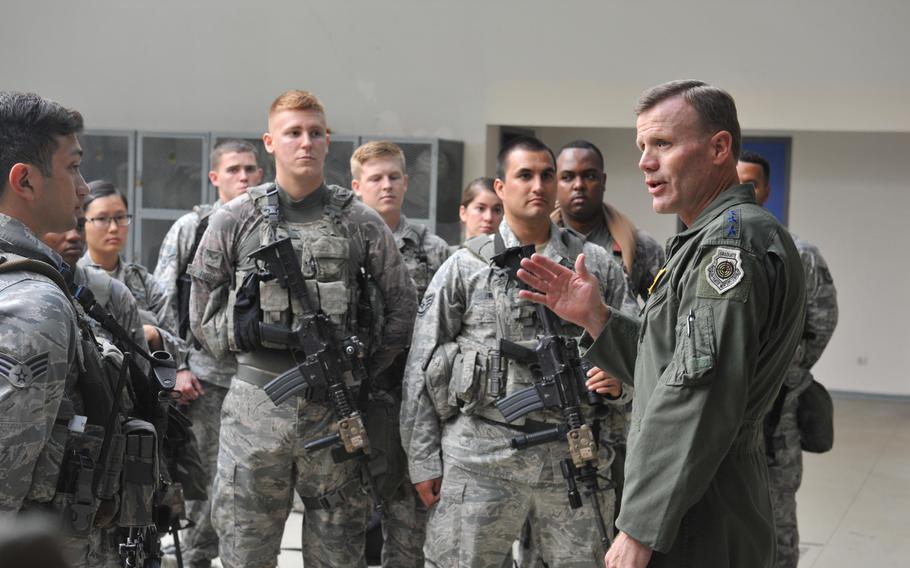 KAISERSLAUTERN, Germany — Military and civilian families won’t be returning to Turkey for the foreseeable future, as the Pentagon decided this week to change the status of permanent duty assignments there to one-year, unaccompanied tours, Air Force officials in Europe said Friday.

The decision was made Wednesday, when it also went into effect, said Capt. Robert Howard, a spokesman for U.S. Air Forces in Europe–Air Forces Africa.

“This decision was made in response to continued security concerns in the region –— primarily the risk of terror attacks from militants affiliated with or inspired by” the Islamic State group, Howard said in a statement.

It’s intended to mitigate the risk to Defense Department personnel, including family members, “while ensuring the combat effectiveness of U.S. forces and our mission to support operations in Turkey,” Howard said.

Families, he added, should expect “that this tour change will be permanent.”

There may be exceptions to the shorter tour length, depending on the mission, Howard said. Those will be determined on a case-by-case basis.

The decision to remove families permanently from Turkey essentially makes official what’s already been in place in the country’s volatile southeastern region for the past six months. At the end of March, more than 600 family members of U.S. military and civilian personnel were forced to leave Incirlik Air Base and smaller bases in Izmir and Mugla because of worsening security conditions there.

Those families never returned to Turkey. Most by now have either relocated to the States or joined their active-duty spouses at their next duty station.

Military officials said at the time that it was unlikely families would return to Turkey in the immediate future, but that determination was subject to Pentagon approval.

About 100 Defense Department dependents remain in Turkey at the moment, Howard said. Families at some locations in Turkey, including Ankara, were not subject to the mandatory departure in March.

The timeline for their departure hasn’t been determined.

At Incirlik, the one-year, unaccompanied tours should begin soon for incoming airmen.

“So we are actively doing the transition,” said Col. John Walker, 39th Air Base Wing commander at Incirlik. “The next rotator or the rotator after that, depending on how long it takes to implement, folks are going to start showing up with 12-month assignments.”

Walker’s statement was recorded during a “Commander’s Corner Recap,” which was posted on Incirlik’s Facebook site on Friday.

For civilians and military personnel already in Turkey, tour length will likely also be curtailed, but there may be exceptions to delay those end dates to ensure continuity of mission and to meet readiness requirements, officials said.

The security situation in Turkey hasn’t improved since most military and civilian families departed in March.

The country was placed under a three-month state of emergency after the attempted coup in July to oust President Recep Tayyip Erdogan. Allegations that Pennsylania-based cleric Fethullah Gulen was behind the coup stoked anti-U.S. sentiment and protests against Americans at Incirlik.

Turkey has allowed the Air Force to continue flying missions from the country, including air strikes against Islamic State group targets in Syria and Iraq. But the failed coup has threatened to sour ties between Turkey and its Western allies.

In the meantime, Turkey remains under a heightened threat of terrorist attacks.

The State Department continues to warn U.S. citizens to avoid travel to southeastern Turkey because of increased threats from terrorist groups. Last month, the agency extended voluntary departure of family members assigned to the U.S. Embassy in Ankara and the U.S. Consulate General in Istanbul. That departure was to remain in effect until Friday.

The Defense Department currently has about 3,700 service members and civilian employees in Turkey, including 2,700 at Incirlik, officials said.