Turkey open to Russian planes at US Incirlik hub 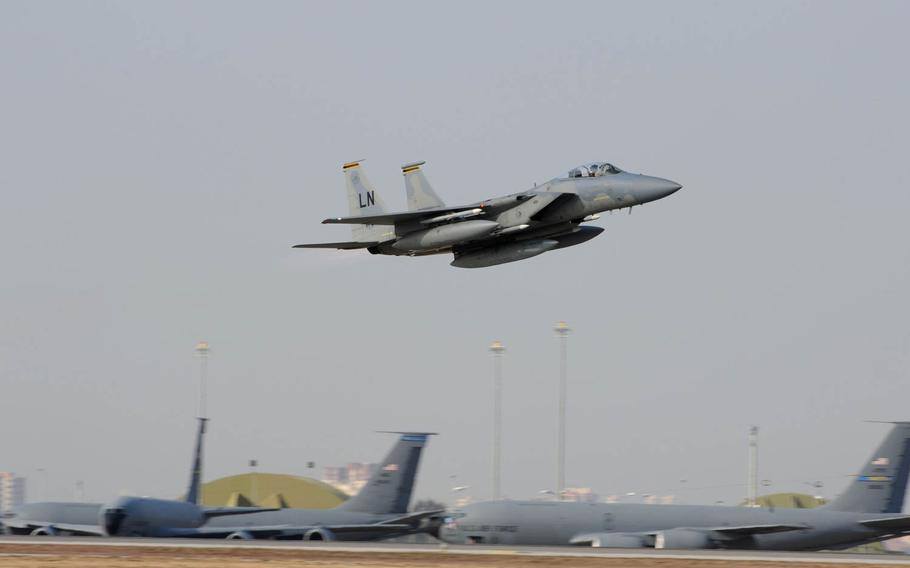 A U.S. Air Force F-15C Eagle takes off from Incirlik Air Base, Turkey, in December 2015. U.S. warplanes could soon be sharing the base's runway with Russian bombers. Turkish Prime Minister Binali Yildirim told reporters during a recent news conference that Russia could use the base, if necessary. (Taylor Worley/U.S. Air Force)

STUTTGART, Germany — Could U.S. warplanes soon be sharing the runway at Turkey’s Incirlik Air Base with Russian bombers?

That’s up to Moscow, according to a top Turkish official, whose comments on possibly opening the strategic Turkish facility to Russian personnel comes ahead of a damage control visit by U.S. Vice President Joe Biden on Wednesday.

When asked on Saturday whether Russia could use Incirlik for airstrikes against the Islamic State group in Syria, Turkish Prime Minister Binali Yildirim answered in the affirmative. “If necessary, the Incirlik base can be used (by the Russians),” Yildirim told reporters.

The prospect of opening Incirlik to Russia, a move that would likely infuriate NATO allies, would put the U.S. military in the awkward position of working and possibly living side by side with an adversary. In addition to being home to about 2,500 U.S. troops, Incirlik houses about 50 U.S. nuclear weapons, according to various watchdog groups.

For Russia, Incirlik is unlikely to offer much tactical value, since its fighter-bombers and attack helicopters already operate from bases in Syria closer to the actual battlefields, and Yildirim made clear that Moscow hadn’t requested use of the air base. Still, a move into Incirlik could offer Russia an opportunity to chip at NATO unity.

Whether Yildirim was serious about the Incirlik offer to Moscow or floating the idea as a sign of leverage against the United States isn’t clear. But what has become apparent in recent weeks is that inside Turkey, where conspiracies abound about the U.S. having covertly backed the attempted July coup attempt, there is growing frustration with the Washington.

In the aftermath of the attempted mutiny by elements of the Turkish military, U.S. officials have publicly backed the government of President Recep Tayyip Erodgan, but also voiced concern about a sweeping purge in Turkey that has resulted in the detention of thousands of military officers, academics and political opposition figures. Such criticisms from America and its NATO allies have prompted a furious response from Erdogan’s supporters, including from pro-government news outlets that have interpreted such criticisms as a sure sign of U.S. sympathy for the mutineers.

The Obama administration has firmly rejected such charges. Still, Ankara also has lashed out at Washington, which it accuses of foot-dragging on a demand that Fethullah Gulen, a cleric who lives in Pennsylvania, be extradited in connection with Turkish allegations he masterminded the coup plot, something the Gulen has denied.

The U.S. has sought to reassure Turkey of its political and military standing inside NATO, and two of the U.S. military’s top generals have made recent visits to Ankara. On Monday, U.S. European Command’s Gen. Curtis M. Scaparrotti praised Turkey, saying it has a unique standing within the military alliance.

“It sits at the crossroads of the many challenges we face in Europe, from the refugee crisis, to terrorism, to human trafficking,” said Scaparrotti, in a statement after his Monday stop in Ankara for talks. “We are thankful for their leadership and contributions in each of these areas, and for access they have granted us to their bases, which are critical to our operations.”

Still, Turkey has sought closer ties with Russia since the coup, patching up a relationship with Moscow that was deeply damaged after Turkey shot down a Russian bomber around its southern border in November. At the time, Russian took a tough stance, severing many diplomatic and economic ties. Since then, Turkey has apologized for the incident with Erdogan making a formal visit to Russia to meet President Vladimir Putin earlier this month.

With relations on the mend, there could be an opportunity for Moscow to play Turkey off the West in an attempt to sow divisions in institutions such as NATO and the European Union, some analysts warn.

“Will Russia’s long game of undermining the EU’s cohesion, the U.S. status as the major superpower, or the role of NATO find fertile ground in post-coup Turkey? One hypothesis is that Russia may go for a long-term game-changing move and lure Turkey away from the West as part of a broader geopolitical reconfiguration,” wrote Marc Pierini, a scholar with the Carnegie Europe think tank and former EU ambassador to Turkey.

For the U.S. and its NATO allies, Incirlik during the past year has emerged as a primary hub for airstrikes against the Islamic State group in Syria and Iraq.

It also has been a place of upheaval.

In March, EUCOM ordered military family members off the post, where dependents have been a presence for decades amid security concerns. The move forced schools to close and likely marked the end of Incirlik as an accompanied tour destination for the Air Force for the foreseeable future. Some experts have questioned the long-term viability of Incirlik as a hub for U.S. Air Force personnel, given the political tensions with Ankara.

The Washington-based Stimson Center also has said the U.S. should consider moving its nuclear weapons out of Turkey, citing possible security concerns in the wake of the attempted coup, which resulted in power being cut off at the base for nearly a week as Turkish authorities sought to regain control. The U.S. was forced to rely on generators to carry out its mission.

“Whether the US could have maintained control of the weapons in the event of a protracted civil conflict in Turkey is an unanswerable question,” said the Stimson report, which examined various ways to reform the U.S. nuclear program.

EUCOM, which as a matter of policy doesn’t comment on locations of nuclear weapons, nonetheless said that during the attempted coup no U.S. personnel or assets were ever threatened.

“We do not discuss the location of strategic assets," said EUCOM spokesman Capt. Danny Hernandez. "Broadly, we continue to take appropriate security steps to maintain the safety and security of our personnel, our civilian and military personnel, their families and facilities.”