Turbos give a boost to 58th Signal Battalion's power 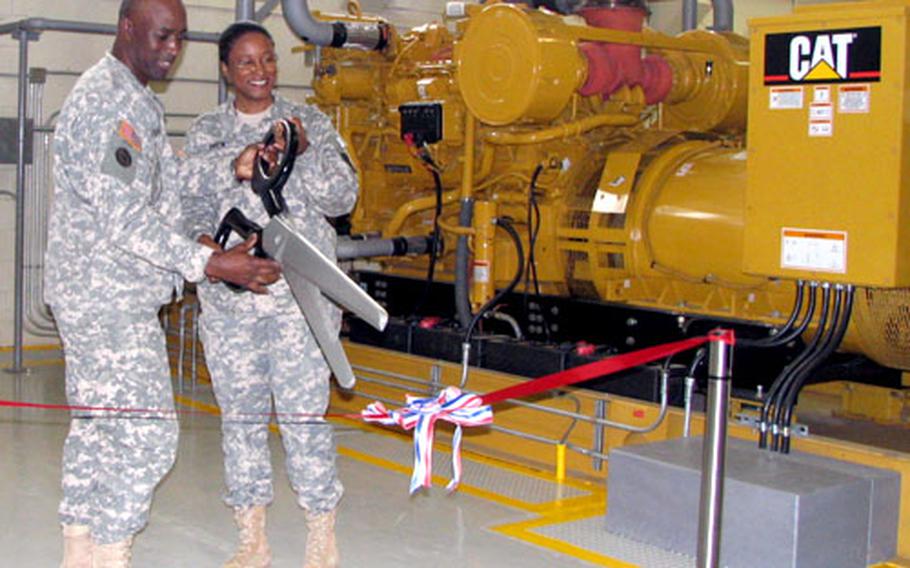 As in four brand-spanking-new turbo engines, each producing a megawatt of electricity to ensure the military&#8217;s lines of communication in the Pacific region will always be open.

The new, $11.7 million system was formally introduced to the public during a ribbon-cutting ceremony Tuesday. But it&#8217;s been humming along faultlessly for a month, said Alex Meno, project manager for the 58th Signal Battalion.

Lt. Col. Maria R. Drew, the battalion commander, said at the ceremony that numerous military agencies and contractors from the States and Okinawa participated in the project.

&#8220;Today, the Fort Buckner power plant stands out as one of the most technologically advanced power plants in the U.S. Army inventory,&#8221; Drew said. &#8220;The power plant is capable of producing four megawatts of electricity, enough to power 2,600 homes in the United States year-round.&#8221;

Project coordinator Jay Villanueva and Meno, who is leaving for reassignment in Texas later this month, came up with the original proposal, worked up the design and engineering and came up with a funding structure for the project.

&#8220;That&#8217;s critical in today&#8217;s global war on terrorism. Our war fighters are continuously deployed throughout the Western Pacific and Indian Ocean regions and rely on the communication services we provide.&#8221;

&#8220;This is definitely a key facility in more ways than one,&#8221; said Col. Edric Kirkman, commander of the 516th Signal Brigade, the battalion&#8217;s Hawaii-based parent organization. &#8220;This is a very important site, in that it allows multiple services to accomplish their missions. Many will never know the distance traveled by the electrons that travel through this facility.&#8221;

The 58th Signal Battalion provides all Defense Department transmission links on and off Okinawa and maintains all of Okinawa&#8217;s interbase communication links. The battalion also operates a satellite terminal and provides all Army electronic maintenance support for the Pacific theater and Army intrabase communications.