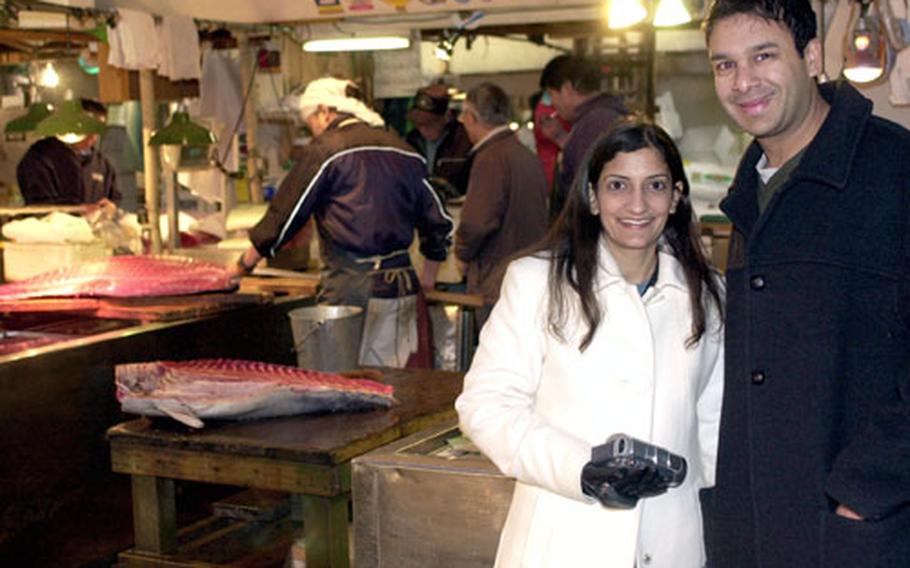 While tourists like Rahul and Reshma Aggarwal of Los Angeles are welcomed to smile for a keepsake during their Dec. 28 visit to Tsukiji Fish Market, complaints have prompted market officials to take action against unruly visitors who have reportedly been touching the tuna and disrupting morning tuna auctions with drunken behavior and flash photography. (Paul Newell / S&S)

While tourists like Rahul and Reshma Aggarwal of Los Angeles are welcomed to smile for a keepsake during their Dec. 28 visit to Tsukiji Fish Market, complaints have prompted market officials to take action against unruly visitors who have reportedly been touching the tuna and disrupting morning tuna auctions with drunken behavior and flash photography. (Paul Newell / S&S) 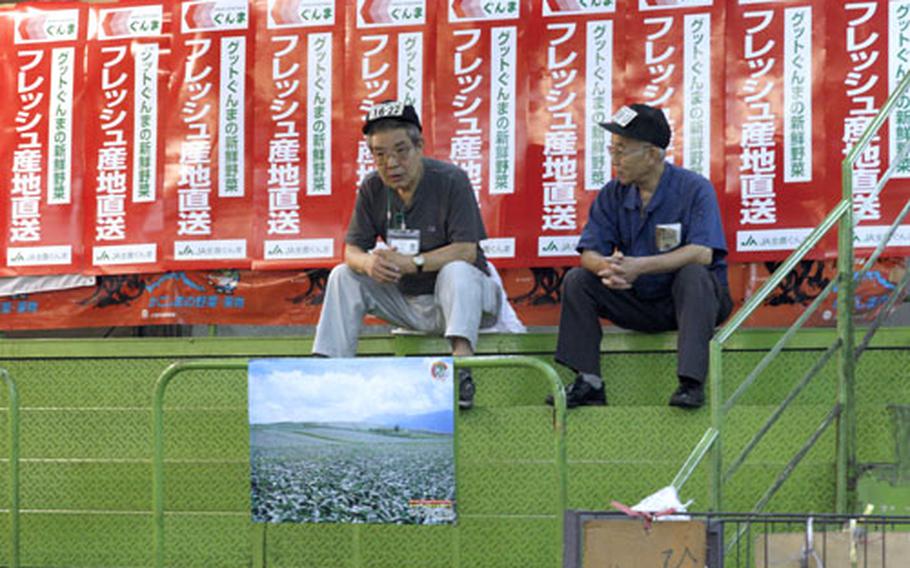 A high-priced fish bought at the morning auction is inspected before shipping. (Joe Gromelski / S&S) A fish is cut into sections before shipping. (Joe Gromelski / S&S)

TOKYO &#8212; Manners &#8212; or a lack of them by some visitors &#8212; have prompted officials of the largest fish market in Japan to ask foreign tourists to either follow the rules while watching tuna auctions, or stay away.

From touching tuna on display, to using flash photography, to coming to the auction drunk, visitors at Tokyo&#8217;s Tsukiji fish market have interfered with the early-morning auction and other market activities for years, according to deputy market director Yoshiaki Takagi.

Takagi said that although most people follow the rules, auctioneers are troubled by camera flashes, which distract them from reading bidders&#8217; hand signs, Takagi said. And some people are unruly when they visit the market after a night of drinking, he said.

More than 90 percent of the 70 to 100 daily visitors who come to the auction are foreigners, according to Takagi. The market is also a popular place to visit for people connected with U.S. military bases in the Kanto Plain.

The auction is open to wholesale businesses, but held in a public place where visitors can walk in and watch freely. The market also has restaurants and shops frequented by the general public.

To improve the situation, in April, Tsukiji officials banned visitors from entering wholesale auction sites, except for a roped-off area where visitors can watch the tuna auction from 5 a.m. to 6:15 a.m.

Concerned about interference during the busy end-of-the-year and New Year seasons, between Dec. 15 and Jan. 17 officials barred the public from the auction site.

It was reopened on Jan. 19 with two guards keeping an eye on visitors, who are confined to a 320-square-foot area. Visitors also are given handouts explaining the rules translated into English, Chinese, Korean and Russian.

However, Takagi warned that visitors should keep in mind that the market can be dangerous.

He said trucks and carts zoom around the narrow aisles of the market.

"We can&#8217;t be held responsible [for what happens]," Takagi said. "People need to understand that there are risks when coming to the market."

"It is a place for business and not a tourist site," Takagi said.