Trying to give a better life 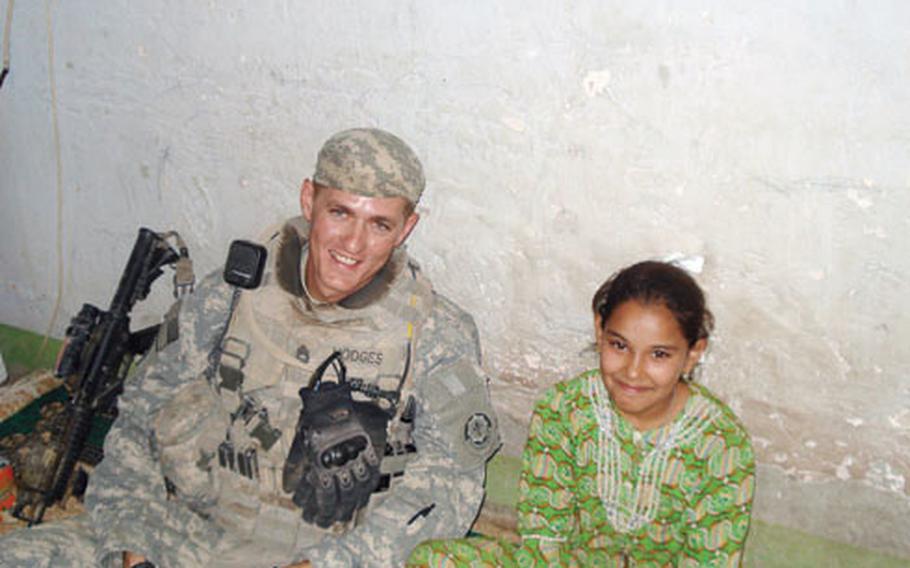 Sgt. 1st Class Shawn Hodges, left, with Iman, the daughter of a Diyala province "Sons of Iraq" leader. Hodges became close to Iman and her family during a recent deployment and, with Iman’s father’s permission, tried to adopt her. ()

VILSECK, Germany &#8212; For Shawn and Shavodsha Hodges, it was the latest in a long line of "Nos."

Sgt. 1st Class Shawn Hodges and his wife had hoped to give Iman, a 12-year-old Iraqi girl, a better life. But adoption rules derailed their plans.

The couple has three deployments between them, and Shavodsha, who has since left the military, received a Purple Heart after she was injured by a roadside bomb. Both say the only thing missing from 12 years of happy marriage has been a child.

After spending thousands of dollars on grueling medical procedures, Shawn and Shavodsha, both 33, have been frustrated at every turn.

Shawn recently returned to his home in Vilseck, after a 15-month deployment with the 2nd Stryker Cavalry Regiment&#8217;s 3rd Squadron that took him from Baghdad to Diyala province and included heavy fighting. Toward the latter half of his time in Iraq, the 2nd Stryker mission in Diyala shifted more toward reconstruction efforts, which put him in regular contact with local Iraqis.

Shawn met with Borhan, a local leader for a unit of the "Sons of Iraq" &#8212; groups made up largely of former insurgents who are now aligned with coalition forces. Borhan welcomed 2nd Stryker soldiers into his cramped, concrete home, a two-bedroom building where 12 people live with no running water and no furniture.

Borhan&#8217;s only daughter, Iman, was kept out of school to help care for the younger children in the house, including two cousins whose father was killed by al-Qaida in Iraq.

"A lot of times I would go there and she looked like she was way overworked for a kid," Shawn said.

Shawn describes Iman as a bright, kind 12-year-old and says the two hit it off, communicating through hand signals and one of Iman&#8217;s brothers who speaks English. She taught him to count in Arabic and he taught her some English.

Used to the constant refrain of "Mister, mister, give me, give me" from Iraqi children, Shawn said Iman was different.

"She was the one kid in the area who never asked for anything," he said.

Iman&#8217;s family is better off than many in the area, but still lives with intermittent electricity and drinks dirty canal water they must boil before consuming, Shawn said. The family could not afford new clothes, let alone toys for the children. So Shavodsha began sending Iman gifts like fuzzy pens, note pads and lip gloss.

"I sent her stuff I would send if I had a little girl," she said.

One day, Iman asked Shawn if he would take her home with him. Borhan said he would be honored if Shawn Hodges would give his daughter a better life.

Shawn and Shavodsha agreed they would try to adopt Iman and take her out of the poverty and repression that many Iraqi women face.

The couple had a ray of hope when a legal representative with Shawn&#8217;s squadron said adoption might be possible.

"I love kids, period," said Shavodsha, who now works as a substitute teacher. "I was very excited."

Their excitement was short-lived, however. According to the U.S. Embassy in Iraq, it is currently impossible for U.S. citizens to adopt Iraqi children because the country&#8217;s laws do not recognize adoption, at least as Americans understand the process.

Instead of welcoming a new addition to his family, Shawn had to bid Iman a tearful goodbye.