‘Truth can be transformative': Veterans team with songwriter to share stories of war 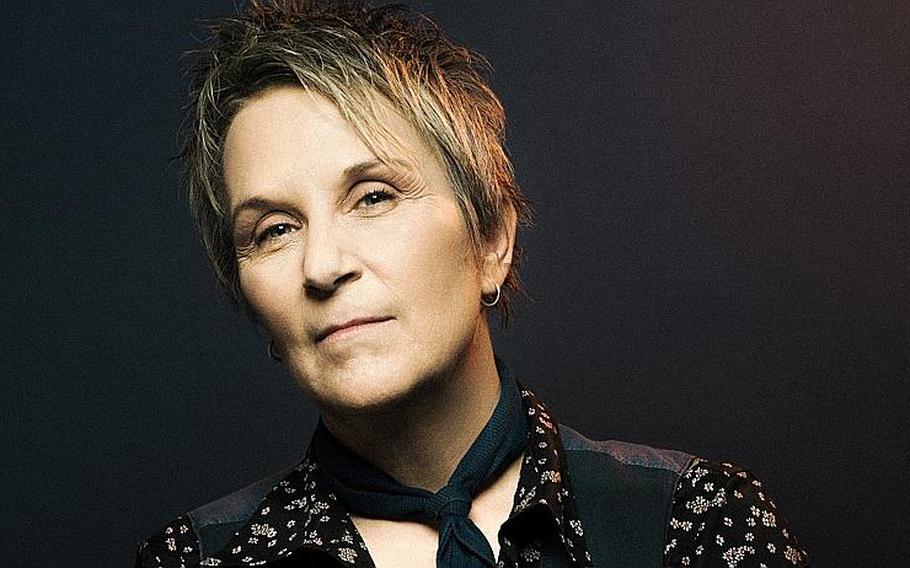 Acclaimed singer-songwriter Mary Gauthier's latest album, "Rifles & Rosary Beads," features 11 songs written with — and about — veterans and military spouses. The songs address veterans' struggles to assimilate to society after service; survivors' guilt; and camaraderie among servicemembers. In others, the subjects range from military sexual trauma to the sacrifices of military families. (Laura Partain/Courtesy of All Ey)

At the last minute, a slot opened in a songwriting session at the veterans retreat in Bluemont, Va., where Marino volunteered. She took it, marking the start of a years-long relationship with Gauthier that would result in several co-written songs about Marino’s experiences with war and coming home. Two of those songs made it onto “Rifles & Rosary Beads” (Thirty Tigers), an album Gauthier released at the beginning of the year featuring 11 songs written with — and about — veterans and military spouses.

Many of the songs address veterans’ struggles to assimilate to society after service; survivors’ guilt; and camaraderie among servicemembers. In others, the subjects range from sexual trauma to the sacrifices of military families.

In each song — and in each conversation with a veteran to form the lyrics — Gauthier attempted to get to the truth of their experiences and struggles, physically, emotionally and spiritually.

“I think songs, when they contain truth, can be transformative,” Gauthier, 56, said. “I think that writing with people who have trauma and getting as close as we can to that experience in a song, letting the melody help us, can articulate what words alone can’t get to,” she said. “A song can help pave the way back home.”

Marino’s songs, and the others on the album, were written as part of SongwritingWith:Soldiers, which pairs professional songwriters and veterans to help them process their experiences through music. A portion of album sales goes to the nonprofit.

Before Gauthier volunteered with the program, she had a stereotype of a veteran in her mind. Marino didn’t fit that preconception — neither did any of the other veterans Gauthier worked with on songs.

She believes her album has the power to share the voices of veterans not typically heard — ones that differ from Hollywood’s depictions and her own.

PopMatters, an international online magazine, said the album — Gauthier’s 11th — “may be one of 2018’s most important albums.”

“Our image of a veteran is stuck in time,” Gauthier said. “We need an update. We need a reality check here.”

‘Soldiering On’ The first time Gauthier and Marino collaborated in a songwriting session, the result was “Soldiering On,” the introductory song on “Rifles & Rosary Beads.”

Marino, 41, is a retired CH-46 helicopter pilot who served multiple tours in Iraq in the early 2000s. Following her retirement, she’s spent much of her time working with veterans with post-traumatic stress disorder and other combat-related illnesses and injuries. “Soldiering On” was based on Marino’s observations about the mission-focused drive in servicemembers that becomes a detriment when they return to civilian life.

“You don’t fight for yourself You fight for the ones by your side They do the same for you And to live you must be willing to die But what saves you in the battle Can kill you at home A soldier, soldiering on” — “Soldiering On”

“It’s a larger statement about the experience of a lot of veterans, who struggle to reach out because in the military they tend to be instilled with this mindset of, ‘You suck it up, drive on, do the mission,’ ” Marino said.

The next time they worked together was after Marino sought out Gauthier in Nashville, the musician’s home. Marino wanted to write about the helicopter crash in Iraq that killed a friend, a former student and five others.

The helicopter, Morphine 1-2, was hit by insurgents and crashed Feb. 7, 2007, near Fallujah, in Anbar province. It was piloted by Marine Capt. Jennifer Harris, 28. First Lt. Jared Landaker, 25, was the co-pilot.

At the time, Marino was working as a flight instructor in California. She had helped train Landaker. She had made plans to see Harris when she returned home. The flight was intended to be Harris’ last in Iraq — her tour was scheduled to end the following week, Marino said.

“When they were lost, it just shook me,” she said. “I had wanted to go over there and join their squadron because I knew they were short on pilots. So there was this feeling of, ‘I wish I had been there, done something, gone in their place.’ ”

Marino wanted to get that feeling down on paper and into a song. The result was “Morphine 1-2,” which describes Harris and Landaker, as well as the guilt Marino felt about their deaths.

“My head knows but my heart can’t see It’s not like it should have been me But I wish that I had been there on that day Even now, I’d take their place” — “Morphine 1-2”

“By telling that personal story, I was reaching out to everyone else who struggles with that sense of loss and guilt and ‘Why did I come home and they didn’t get to?’ ” Marino said. “I also think this was my way of honoring the seven.”

Unexpected connection During songwriting retreats, Gauthier spent hours in conversation with veterans. Over the course of a weekend, they wrote lyrics that Gauthier paired with melodies.

In the past six months, Gauthier has taken those songs and performed them across the United States and in Canada, Ireland and the United Kingdom. She’ll be in Nashville this month.

On occasion, one of her co-writers joins her onstage.

Gauthier has no military experience. She worried she wouldn’t be able to connect with veterans on a deep enough level to write songs. But she was wrong.

Most people have encountered trauma and loss, Gauthier said. Those feelings are what bonded Gauthier with her co-writers, she said, and it’s what makes the album relatable to people who haven’t served.

“Here I am, this folk singer, openly gay, leftist in my personal politics, and I’m connecting powerfully with members of the military,” she said. “And that bridge, that connection, is a huge, huge part of what we have to do to come back together as a nation.

“We have to mix with people we don’t normally mix with, have open hearts and listen to each other.”

More about Mary Mary Gauthier (pronounced go-SHAY) is an award-winning folk singer and master songwriter from Louisiana who began her career at 35 after struggling through alcohol and drug addiction and spending time in rehabilitation centers, halfway houses and jail. She got sober in 1990 and cooked at a Cajun restaurant she ran in Boston for 11 years. Gauthier, who lives in Nashville, wrote the semi-autobiographical song “I Drink,” which deals with alcoholism. She describes it as her “career song” and claims it was the one that got her a record deal. It’s been performed by Blake Shelton, Bill Chambers, Bobby Bare and Tim McGraw. More of her songs have been performed by Jimmy Buffett, Mike Farris, Candi Staton, Bettye LaVette and others. Gauthier’s first major album release was “Mercy Now” in 2005, which earned her the “New Artist of the Year” award by the Americana Music Association. The title track was named by Rolling Stone as one of the 40 saddest country songs of all time. “Rifles & Rosary Beads” is Gauthier’s 11th album. After widespread positive response, Gauthier said she’s considering another album of songs written with veterans and military spouses. She continues to participate in workshops to help them tell their stories.wentling.nikki@stripes.com Twitter: @nikkiwentling