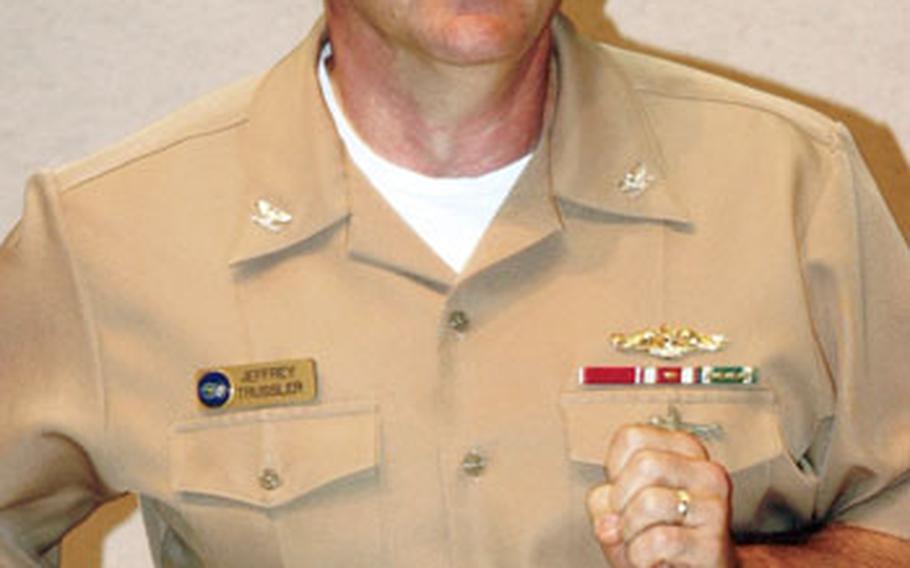 NAPLES, Italy &#8212; When Navy Capt. Jeff Trussler heads to the Arctic Circle this month, the submariner will be leading an exercise involving surface ships and aircraft.

Trussler is part of the Navy&#8217;s streamlining efforts to have leaders in Europe command not only assets such as ships, submarines and aircraft, but also geographic areas, said Rear Adm. Joe Leidig, deputy commander of the Navy&#8217;s 6th Fleet.

After 14 months, Leidig on Friday relinquished command of Task Force 69, handing the reins of a command typically held by a two-star admiral to Trussler. The move brings Task Force 69 in line with four other task forces under the Navy&#8217;s 6th Fleet responsibility in Europe, Leidig said.

"In one part of the job, they are responsible with providing ships and airplanes and submarines in support of the 6th Fleet commander. We&#8217;ve also very recently aligned each of our task force commanders to be responsible for a geographic area in Europe and Africa."

Which is why Trussler is heading to the Arctic Circle for the third annual Northern Eagle exercise, typically between the U.S. and Russian navies. This year. the exercise will include the Norwegian navy, Trussler said.

The exercise will test sailors&#8217; maritime interdiction operations and search and rescue operations, he said. The U.S. is sending the guided-missile frigate USS Elrod, and a P-3 aircraft, originally designed for anti-submarine warfare, but also used for search and rescue missions.