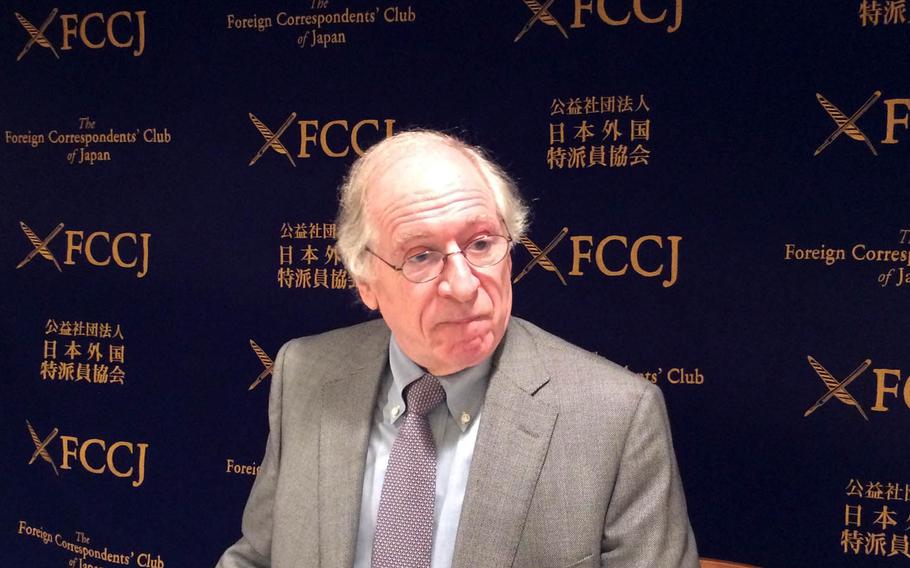 Martin Schulz, a senior research fellow at the Fujitsu Research Institute, told reporters at the Foreign Correspondents' Club of Japan that a Trump administration would not vacate U.S. bases in the Western Pacific, Tuesday, Nov. 22, 2016. (Seth Robson/Stars and Stripes)

TOKYO, Japan — A foreign policy expert says America won’t withdraw troops from the Far East but could disperse some of them after President-elect Donald Trump takes office in January.

Martin Schulz, a senior research fellow at the Fujitsu Research Institute, told the Foreign Correspondents’ Club of Japan he didn’t think the Trump administration would vacate U.S. bases in the Western Pacific. About 50,000 U.S. military personnel are stationed in Japan, with almost 30,000 on the Korean peninsula.

Trump said during the election campaign that Japan and South Korea should contribute more to the cost of stationing U.S. forces on their territory and threatened to withdraw troops if the host nations didn’t oblige.

But Schulz said he didn’t think leaders could envision a future where there could be peace and stability in the Far East without a U.S.-Japan alliance.

“Trump never said Japan should defend itself,” he said, adding that the businessman and former reality television star has already backed off several promises made on the campaign trail.

Money isn’t the reason U.S. troops are in the Western Pacific, said Schulz, an expert in macro economics and international finance. If Americans concluded that defending Japan didn’t impact their security, the Japanese couldn’t spend enough money to convince them to stay, he added.

There’s increasing support for the alliance among Japanese because many people have concluded the country can’t defend itself against a strengthening China without U.S. help, Schulz said.

But it would make sense to streamline the U.S. presence, he added.

The U.S. and Japan have agreed to share the multibillion-dollar cost of moving thousands of Marines and family members from Okinawa to Guam over the next decade.

“Kadena [Air Base] is like a sitting duck susceptible to missile attacks from the Chinese,” Schulz said. “We should disperse our forces in Asia and out of Okinawa … but I can’t imagine a world in which there is no U.S. military presence in Japan that the Japanese would want to see come about. I can’t imagine Trump would try to make that world come about by trying to pull us out of Japan.”