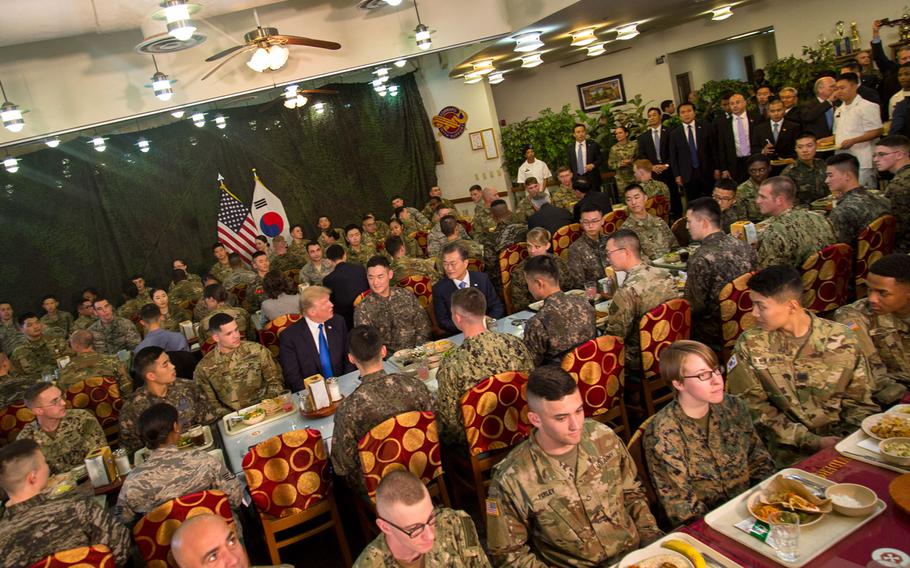 SEOUL, South Korea — President Donald Trump stayed largely on script during his two-day trip to South Korea. He was tough on North Korea, but the words “Little Rocket Man” weren’t uttered. No threats of unilateral military action were made.

Trump smiled and shook hands with his South Korean counterpart Moon Jae-in as they pledged to cooperate against the growing menace from the North. Any gaps between them were kept out of view.

Experts said the gaffe-free visit last week gave a boost to frayed ties between the decades-old allies, but key differences over security and trade remain.

“The message was that the U.S.-South Korean alliance is solid and Trump and Moon share the position of maximum sanctions on the North Korean nuclear issue,” said Yun Duk Min, a former head of the Korea National Diplomatic Academy.

While Trump and Moon agree on the need to increase economic pressure to curb the North’s nuclear weapons program, they differ over the diplomatic approach.

Moon, the son of North Korean refugees and a former human rights attorney, seeks engagement and dialogue with Pyongyang - something Trump has disparaged as “talk of appeasement.”

The U.S. president, meanwhile, has issued a string of bellicose statements and tweets, including threats to unleash “fire and fury” and to “totally destroy” the communist state. He also called North Korean leader Kim Jong Un “little rocket man” in a speech to world leaders at the U.N. General Assembly.

So many South Koreans breathed a sigh of relief when Trump showed relative restraint as he addressed the National Assembly in Seoul, about 35 miles south of the heavily fortified border that divides the peninsula.

Trump denounced the North Korean regime as a “cruel dictatorship” and “a hell that no person deserves.” But he said despite that “we will offer a path towards a much better future” if Pyongyang agrees to “complete, verifiable and total denuclearization.”

North Korea insists its nuclear and missile development is not up for negotiation. The isolated regime’s main ally, China, has proposed a so-called “freeze-for-a-freeze,” in which the North would agree to suspend its programs in return for a halt to joint U.S.-South Korean military exercises to pave the way for dialogue.

South Korea’s presidential office said the two leaders “increased their mutual trust and the level of closeness” as they drank tea together, met with U.S. and South Korean troops and toasted each other at a state banquet.

They also “reaffirmed cooperation for the peaceful resolution of the North Korean nuclear issue” and efforts to persuade the North to return to long-stalled talks, it said.

Concerns also are high in Seoul that it may be left out of the equation as Trump enjoys a chummier relationship with Japanese Prime Minister Shinzo Abe and tries to curry favor with Chinese leader Xi Jinping. Editorial writers refer to the fears of South Korea’s diplomatic isolation as “Korea Passing.”

Moon, who vowed never to allow another war on the peninsula, has been particularly worried that the United States may try to conduct an attack against the North without seeking his permission.

But the liberal leader has been forced to harden his positions as the North test-fired two intercontinental ballistic missiles in July and conducted its sixth and most powerful nuclear test on Sept. 3.

Yun, a professor at the Hankuk University of Foreign Studies in Seoul, said Trump offered welcome assurances that South Korea is an important ally.

“But there’s still a worry that maybe the U.S. and China may make a major deal over the North Korean nuclear issue without South Korea, or maybe the U.S. will use its military options,” he added.

Trump’s visit yielded tangible progress in healing the rifts. The two sides agreed that South Korea can develop larger payloads for its missiles, something that’s regulated in their bilateral agreement. The U.S. also has agreed to rotate more powerful assets such as aircraft carriers and bombers as a show of force to deter North Korean aggression.

Trump acknowledged the South Korean government has paid for most of the construction of a newly expanded U.S. base that is to eventually house the bulk of American forces in the country.

He also said 42 South Korean companies announced plans to invest in U.S. projects worth more than $17 billion, and 24 firms promised to buy $58 billion in American goods and services.

“The U.S. and South Korea have different views,” said Park Won Gon, a professor at South Korea’s Handong Global University. “But overall they narrowed their differences.”

Still, cracks in the alliance forged in the 1950-53 Korean War were clear.

During his Nov. 7-8 visit, Trump called the alliance the linchpin in the “Indo-Pacific region,” a phrase that his administration has begun using as part of a new strategic concept. The term reflects an apparent desire for India to play a bigger role in regional affairs and provide a possible buffer against China.

South Korea, which is playing a balancing act between Washington and Beijing, distanced itself from the idea after Trump left for the next stop on his 12-day Asia trip that ended Tuesday.

“Though the concept of the Indo-Pacific region recently proposed by the U.S. does have some similarities with our policy of diversifying our foreign relations, we believe it requires additional consultations to see if it was an appropriate concept while pursuing our mutual strategic goals,” the presidential office said in a statement.

The two sides also face tough negotiations over a Free Trade Agreement that Trump has called a “job killer” and cost-sharing for the 28,500 U.S. servicemembers based in South Korea.