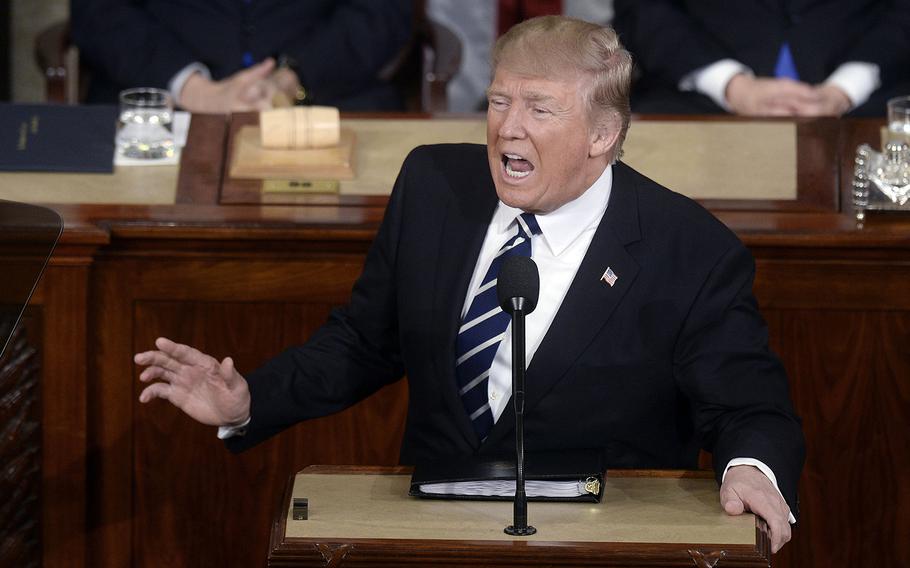 WASHINGTON — In his first address to Congress, President Donald Trump on Tuesday touted his plans to build up the military with more spending, a promise he has pursued since his campaign.

Trump told the gathering of House and Senate lawmakers that his proposed $54 billion increase unveiled this week would provide the tools that the services need to deter adversaries and win wars, and the announcement follows stark assessments of military readiness from Pentagon leaders.

“I am sending the Congress a budget that rebuilds the military, eliminates the defense sequester, and calls for one of the largest increases in national defense spending in American history,” Trump said during the nighttime address.

But lawmakers in his own party have questioned whether Trump’s proposed $603 billion base defense budget is enough to reverse years of fiscal belt-tightening and declining readiness.

The Republican chairmen of Congress’ two armed services committees – Sen. John McCain of Arizona and Rep. Mac Thornberry of Texas – are pushing for a $640 billion base defense budget that they say would shore up overburdened armed forces.

Trump’s proposal would boost the defense budget by $54 billion over the so-called sequester spending cap of $549 billion mandated for 2018 by the Budget Control Act, a law passed by Congress six years ago.

Trump’s hike appears large when compared to the potential budget cap but is actually a modest 4 percent increase in the projected Defense Department budget, according to an analysis by Michael O’Hanlon, senior fellow at the liberal-leaning Brookings Institution, a Washington, D.C. think tank.

That is because Congress has cut deals in recent years to ensure the department has not faced sequester-level caps since 2013, O’Hanlon said in a Brookings podcast posted before Trump’s address Tuesday.

The budget amount is a rough outline of what the White House thinks the military will need and it did not immediately provide specifics on how the money would be spent. Details are expected to be fleshed out as the Defense Department works through the proposal and the president releases a full budget in May.

Trump has proposed major and pricey increases in the size of the military, including bigger Army and Marine Corps combat forces and a 350-ship Navy.

“This is not nearly enough money to do that,” O’Hanlon said. “So, Trump comes in under-funding his own proposal, if you will.”

The Center for a New American Security, a bipartisan think tank, said Trump’s increase is only an “opening move” in negotiations with McCain, Thornberry and other members of Congress, and that the administration is expected to make another supplemental budget request of up to $30 billion for the current year.

The services’ vice chiefs testified last month that the military is desperately in need of new equipment, maintenance and training after years of flat or declining defense spending. Much of the decreases have been due to the end of large-scale ground operations in Iraq and Afghanistan and the caps on federal spending imposed by Congress.

“A plus-up in the defense budget is sorely needed to repair the harmful effects of the [Budget Control Act] on military readiness and modernization,” according to a joint statement by Paul Scharre, a senior fellow at the Center for a New American Security, and Adam Routh, a research associate.