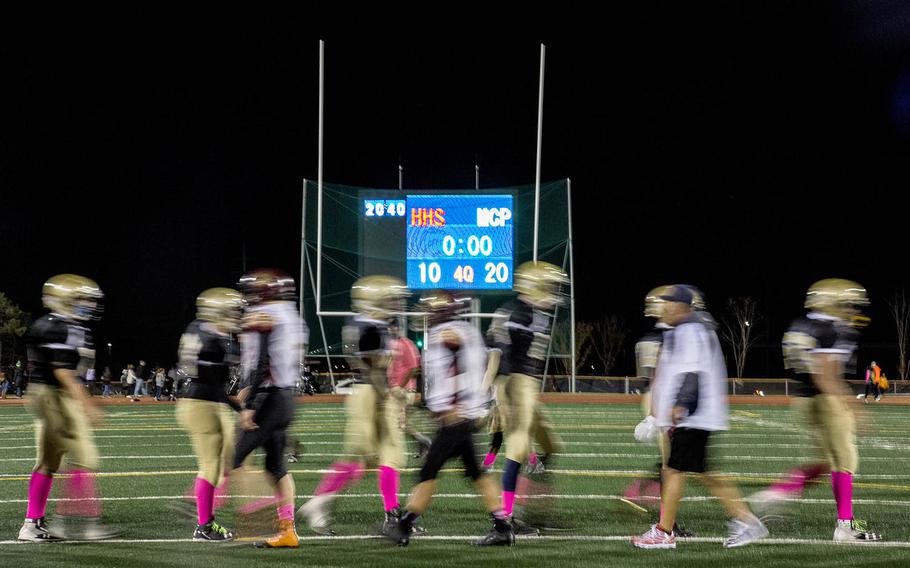 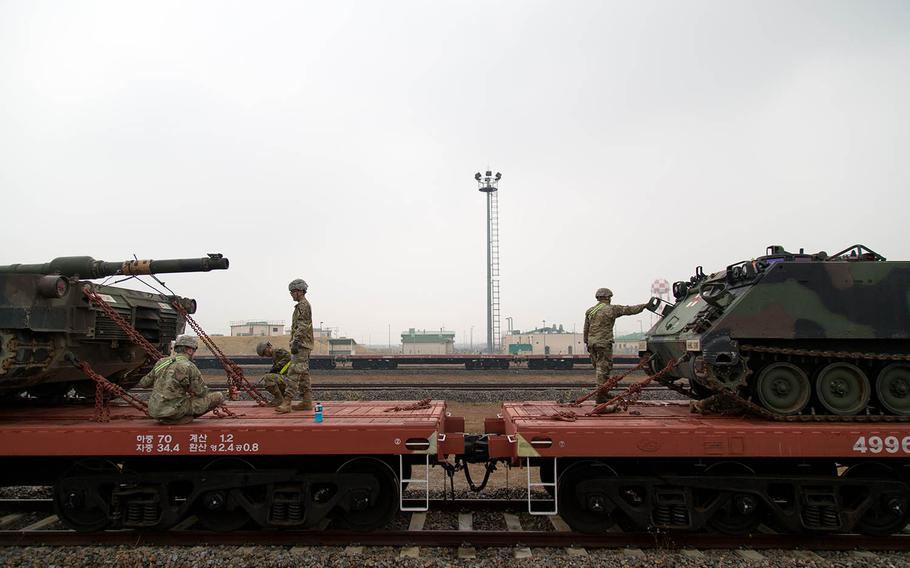 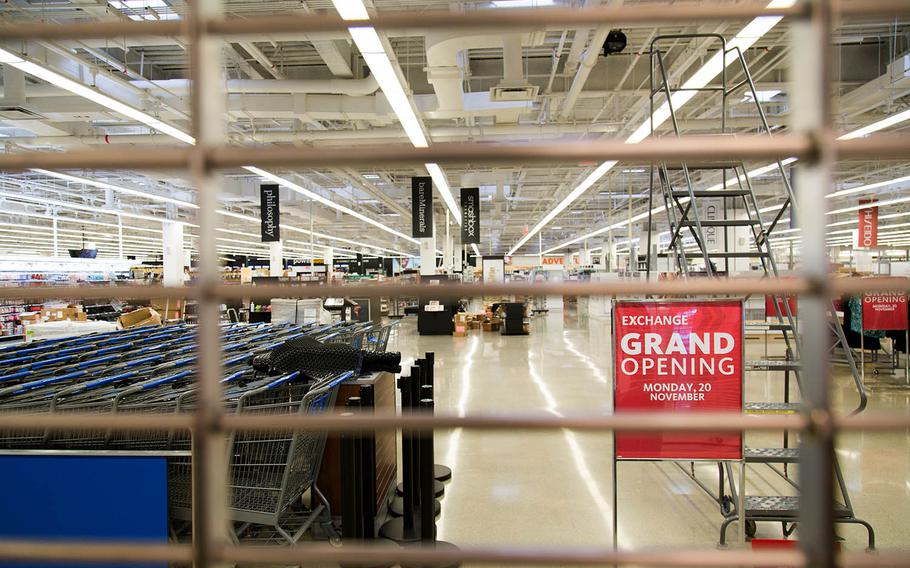 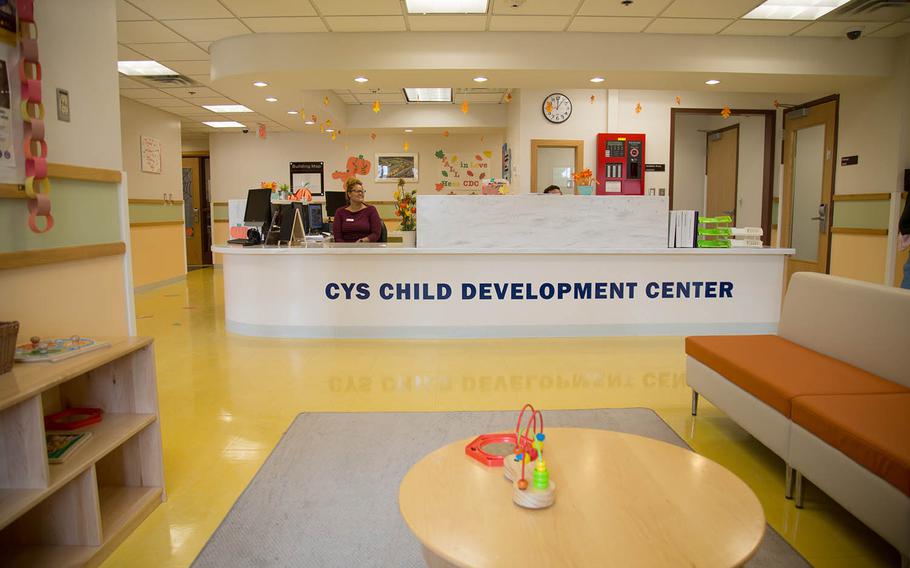 A soldier walks by a barbeque pit near her home at Camp Humphreys, South Korea, Friday, Nov. 3, 2017. (Marcus Fichtl/Stars and Stripes) 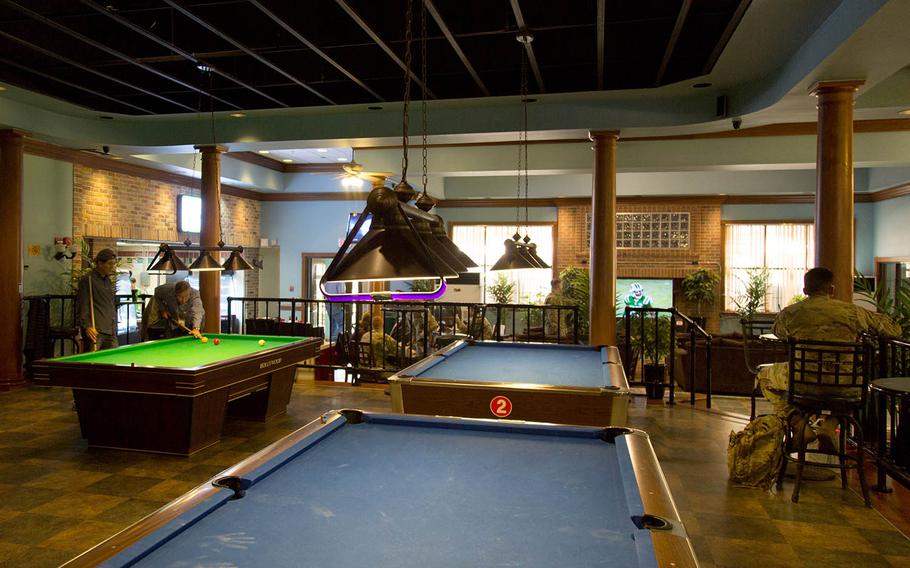 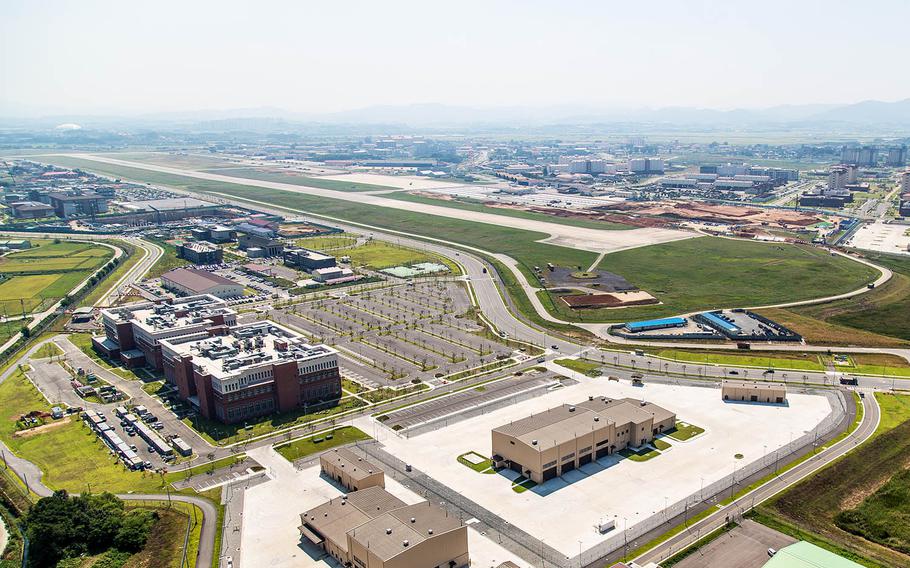 Camp Humphreys, South Korea, as seen from the air on Sept. 12, 2017. (Marcus Fichtl/Stars and Stripes)

CAMP HUMPHREYS, South Korea — One of the first things President Donald Trump will see after arriving Tuesday in South Korea will be a small American town.

Camp Humphreys, a newly expanded Army garrison south of Seoul that is to become the U.S. military’s flagship installation on the divided peninsula, is the first stop on Trump’s itinerary after he lands at Osan Air Base.

In addition to state-of-the-art training and other military facilities, the nearly 3,500-acre base promises all the comforts of home for U.S. soldiers and their families. That includes four schools, an 18-hole golf course, a water park, a gleaming new food court, three Starbucks and eventually a 68-bed hospital. There’s also high school football. Humphreys won the Far East Division II championship on Oct. 28, beating Matthew C. Perry of Japan 39-0.

Trump will have lunch with U.S. and South Korean servicemembers and get a military briefing at the new 8th Army headquarters, which opened in July after decades of being based in the capital at Yongsan Garrison.

He’ll then travel to Seoul, presumably in a helicopter to avoid the typical traffic jams that can make it a three-hour drive, for a summit with South Korean President Moon Jae-in and a state banquet. On Wednesday, Trump is expected to pledge his commitment to the decades-old alliance between the two countries in a speech at the National Assembly.

The White House said Trump does not plan to visit the Demilitarized Zone that separates North from South, breaking with a longstanding presidential tradition.

It was reportedly Moon’s idea for Trump to visit Humphreys, which has been transformed from a remote airfield in the rural area of Pyeongtaek as part of a long-delayed plan to relocate the bulk of U.S. forces from areas near the front lines with North Korea to southern regional hubs.

The South Koreans provided the labor and paid for most of the base’s nearly $11 billion expansion, which was set in motion in a 2004 agreement.

Alexander Vershbow, a former U.S. ambassador to South Korea, said Camp Humphreys will provide “an ideal backdrop to highlight the enduring U.S. commitment to the Korea-U.S. alliance” and its defense against the growing nuclear and missile threat from North Korea.

“It also happens to be a good news story about burden sharing since the South Koreans have paid for over 90 percent of the cost of the new base, which I think should appeal to President Trump’s concern about allied freeloaders around the world,” Vershbow said last week in a conference call organized by the Atlantic Council, a Washington, D.C.-based think tank.

During the presidential campaign, Trump regularly accused allies of taking advantage of the United States and said that South Korea and Japan should pay more for their defense. The Republican candidate even said he would be willing to withdraw the U.S. military unless they paid a greater share of deployment costs.

Seoul argues that it already pays about half the costs at some $900 million a year, in addition to the Humphreys construction.

Gen. Vincent Brooks, the commander of U.S. Forces Korea, said in written testimony in April that only 8 percent of the total project costs for the relocation project comes from U.S. appropriated funds.

The move, which will eventually see the population rise to about 46,000, has been frequently delayed due to construction and quality control issues. It was originally set to take place in 2008, then 2012 and 2016.

It has gained momentum this year, with the number of residents more than doubling from 2016 to 26,000. But U.S. commanders say construction is not expected to be wholly completed until at least 2020.

Soldiers who have moved from northern bases live in barracks that resemble apartment buildings instead of dilapidated Quonset huts. They also have plenty of on-post entertainment, including a “Warrior Zone” with Xboxes, pool tables and a fully stocked bar.

The new food court has nearly a dozen fast-food options, including an Arby’s and a Taco Bell along with clothing stores and a beauty parlor.

A new post exchange is due to open on Nov. 20. Shoppers can also buy freshly made Wonder Bread at the commissary. The hospital, which has been plagued by significant quality concerns, is not expected to be ready until late 2019 at the earliest.

The relocation also will double the distance between the main U.S. military base and North Korea, putting thousands of American soldiers and civilians largely out of artillery range.

The two Koreas have remained bitter enemies since the 1950-53 war ended with an armistice instead of a peace treaty. The U.S., which fought with the South against the communist-backed North in the war, has about 28,500 servicemembers stationed on the peninsula.

U.S. commanders insist the move away from the front lines won’t affect readiness, saying the consolidation will improve coordination between units and training for mobilization.

The military also will maintain the 210th Field Artillery Brigade and other residual forces until the South Koreans develop similar capabilities, along with the Rodriguez Live Fire Range, a 3,390-acre training complex near the heavily fortified border.

Humphreys, meanwhile, will have a simulation center, a water egress trainer for pilots and a tank and Bradley range that uses lasers instead of bullets.

Still, it will be a major change for the U.S. military, which has been based at aging Yongsan since before the war.

Yongsan, which was also used by the Japanese army during its 1910-45 occupation of Korea, has been enveloped by the rapid urban growth of Seoul and city planners hope to use the land as a park after it’s turned over.