Trump to tell Duterte he is ‘fully committed’ to US-Philippines alliance, official says 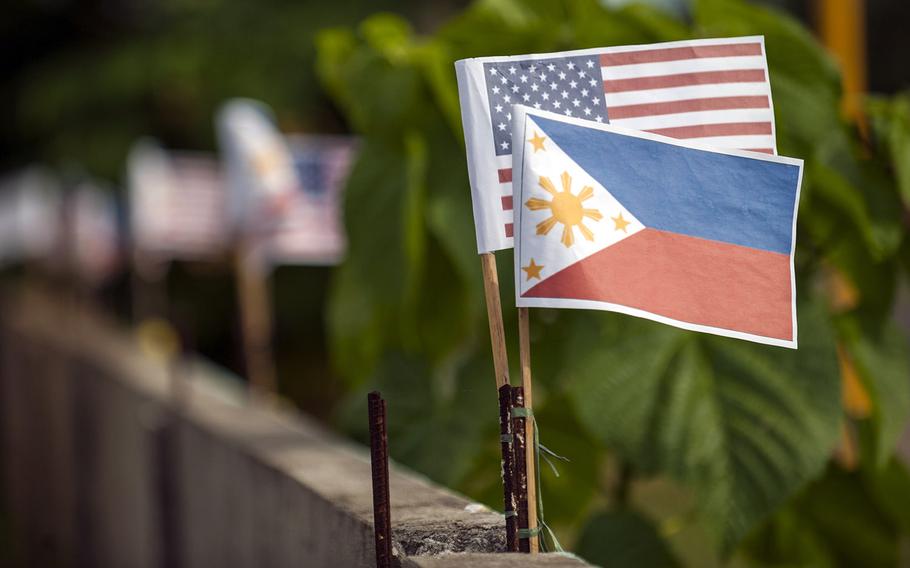 Philippine and American flags are placed at a groundbreaking ceremony during Balikatan 2017 at Guiuan, Eastern Samar, April 26, 2017. (Markus Castaneda/U.S. Navy)

Philippine and American flags are placed at a groundbreaking ceremony during Balikatan 2017 at Guiuan, Eastern Samar, April 26, 2017. (Markus Castaneda/U.S. Navy) 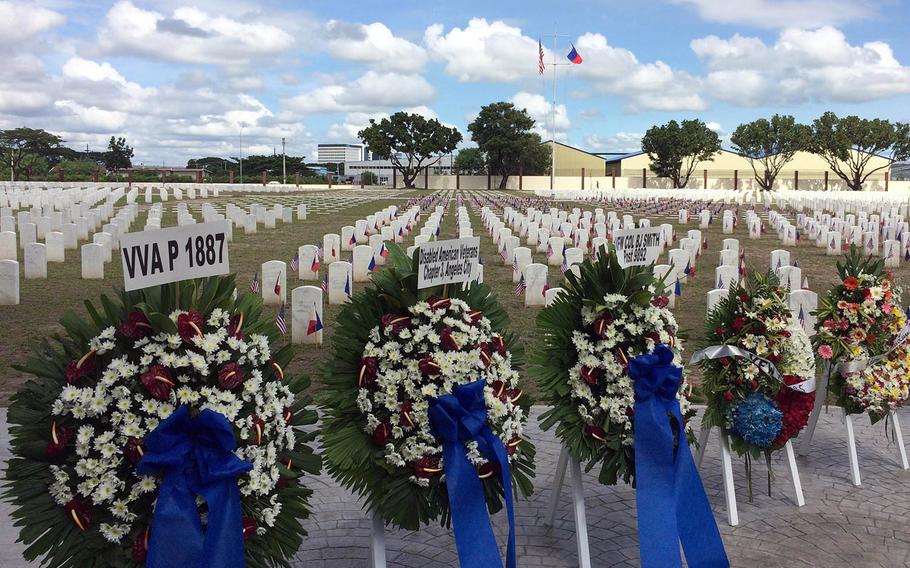 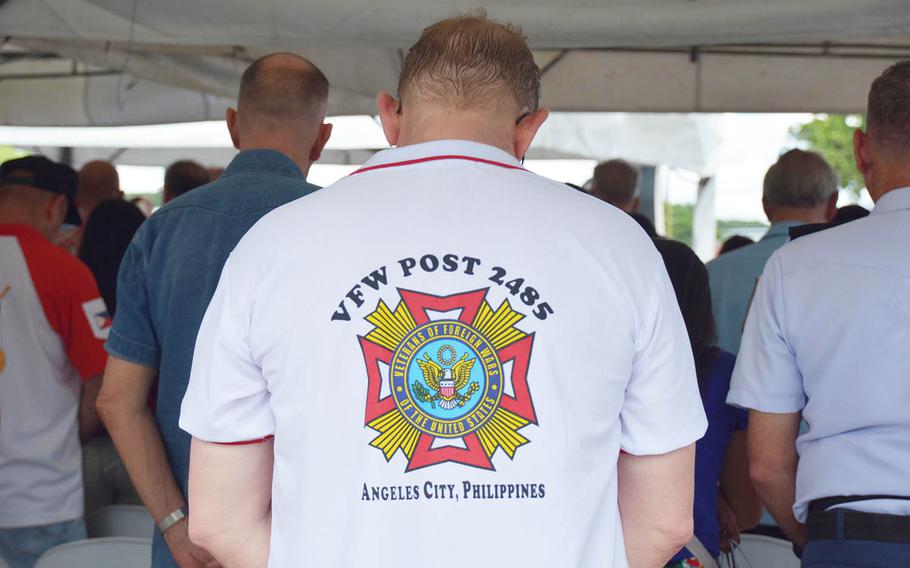 Veterans pray during a Veterans Day ceremony at Clark Veterans Cemetery in the Philippines, Saturday Nov. 11, 2017. (Seth Robson/Stars and Stripes) CLARK AIR BASE, Philippines – President Donald Trump is expected to tout the importance of the U.S.-Philippines alliance while in the country for a summit of Asian leaders, a State Department official told a group of mostly pro-Trump veterans here over the weekend.

“The U.S. remains fully committed to its alliance with the Philippines,” Michael Klecheski, deputy chief of Mission at the U.S. Embassy in Manila, told those marking Veterans Day on Saturday at Clark Veterans Cemetery. “That’s the message that Trump will bring with him.”

The president arrived in the country on Sunday evening to start the final leg of an Asia tour that has taken him to Japan, South Korea, China and Vietnam. He was scheduled to attend a dinner celebrating the 50th anniversary of the Association of Southeast Asian Nations, or ASEAN.

On Monday, he’ll celebrate the 40th anniversary of U.S.-ASEAN relations and hold several meetings with Philippines President Rodrigo Duterte and other leaders.

Trump was originally scheduled to depart Manila on Monday but added a day to the visit so he could more fully participate in the summit.

Relations between the longtime allies cooled last year after U.S. officials criticized Duterte’s sweeping anti-drug crusade. Thousands have died in the extrajudicial killings of both drug dealers and users, and Duterte told reporters last year he would be “happy to slaughter” 3 million drug addicts himself.

The Filipino strongman responded to the criticism by calling President Barack Obama a “son of a whore” and vowing to seek closer ties with China and Russia. He also cut bilateral military training and called for the departure of U.S. Special Forces from his country.

However, American help for Philippine troops battling Islamic militants in the southern city of Marawi and an end to public criticism by U.S. officials – Trump has praised Duterte’s handling of the drug crisis – appears to have led to a thaw. Duterte said last month the dispute is “water under the bridge” and promised to be “friendly” to the United States.

It took 12,000 Filipino troops about five months to free the city of 200,000 people on the southern island of Mindanao from 1,000 extremists who had pledged allegiance to ISIS. They were defeated with the help of Philippine Air Force’s FA-50 Fighting Eagle jets that dropped 500-pound bombs on the enemy, said soldiers in Marawi.

When planes ran low on ammunition during the fight, the U.S. sent bombs from Andersen Air Force Base, Guam, Mancita said.

Troops in Marawi this week also credited U.S. training and intelligence for helping them defeat the insurgents.

“The U.S. is very proud that we were able to help fight the scourge of terrorism [in Marawi],” Klecheski told the veterans at Clark.

The facility, America’s largest overseas military base before the eruption of Mount Pinatubo in 1991 and the subsequent withdrawal of U.S. forces, has been buzzing with foreign delegates, VIPs and police because of ASEAN. More than 2,000 American veterans live near Clark, which is still a regular destination for Air Force aircraft.

Most veterans there were ready to give Trump a warm welcome, according to their speeches and comments at Saturday’s Veterans Day ceremony.

Neil McAuliffe, 70, a retired Army noncommissioned officer living in nearby Angeles City, said he was excited about the president’s visit.

“He’s the type of we person we need – a person who will get things done and honors veterans,” he said.

Stan Wylazlowski, 67, a former Marine Corps reserve officer also living in Angeles City, said he was pleased with Trump’s apparent love of the American people and hoped that his meetings with Duterte would deepen the nations’ relationship.

“They’re strong personalities and unique individuals, but if both of them are smart … I think the Philippines really needs American support and the U.S. loves the Philippines, so I hope they improve the relationship and I think they will,” he said.