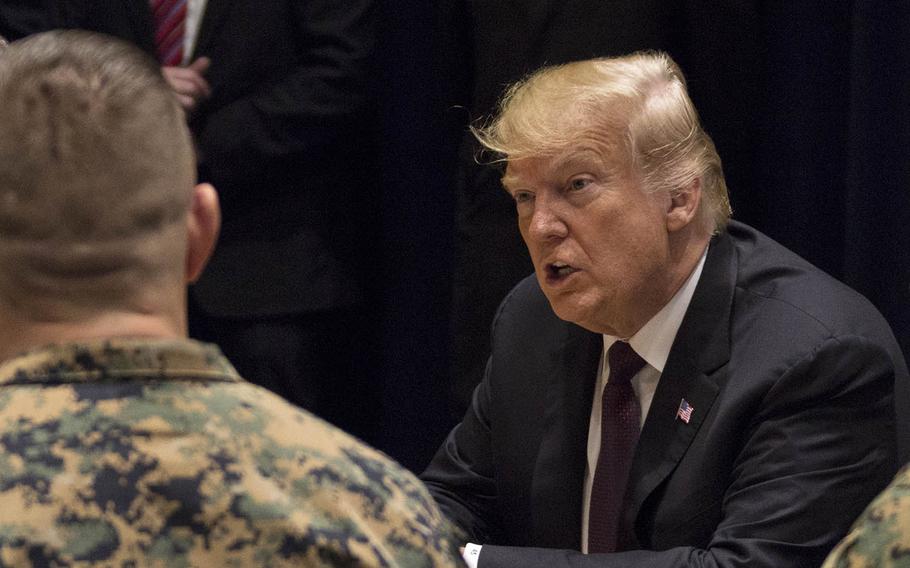 South Korea has pushed back against a new suggestion by President Donald Trump that it should pay more to most U.S. troops. (Hailey Clay/U.S. Marine Corps)

SEOUL, South Korea — South Korea pushed back Wednesday against a new suggestion by President Donald Trump that the U.S. ally should pay more to maintain thousands of American troops on the divided peninsula.

Trump said Tuesday during a Cabinet meeting that Seoul had agreed to pay $500 million more in cost-sharing talks.

“Five-hundred million, with a couple of phone calls,” he said, according to a White House transcript.

The figure he cited wasn’t the same as the numbers provided by officials announcing a new preliminary contract, which was signed by senior diplomats Sunday in Seoul.

That deal calls for Seoul to pay $920 million this year, about $74 million more than the annual sum paid as part of the previous five-year agreement, which expired on Dec. 31.

The so-called Special Measures Agreement still needs to be ratified by South Korea’s National Assembly, although officials expressed confidence it would be approved.

The deal was reached after months of fraught negotiations over Trump’s reported demand that the South more than double its contribution.

The U.S. administration accepted the lower figure but insisted the contract would last only one year, so negotiators will have to start fresh talks soon.

The one-year deal came with an option to extend it for another year if both sides agree to do so, spokesman Kim Eui-kyeom said Wednesday when asked about Trump’s remarks.

“So both sides may review whether an increase is necessary, or may decide to maintain the current level,” he told reporters. “I hope you guys don’t treat this issue of an increase as an established fact.”

The United States and South Korea have been allies since the 1950-53 Korean War, which ended in an armistice instead of a peace treaty.

The dispute over cost-sharing has been an irritant between the two countries at a sensitive time in diplomacy aimed at persuading North Korea to abandon its nuclear weapons.

Trump and North Korean leader Kim Jong Un are scheduled to hold their second summit to discuss the issue on Feb. 27-28 in Hanoi, Vietnam.