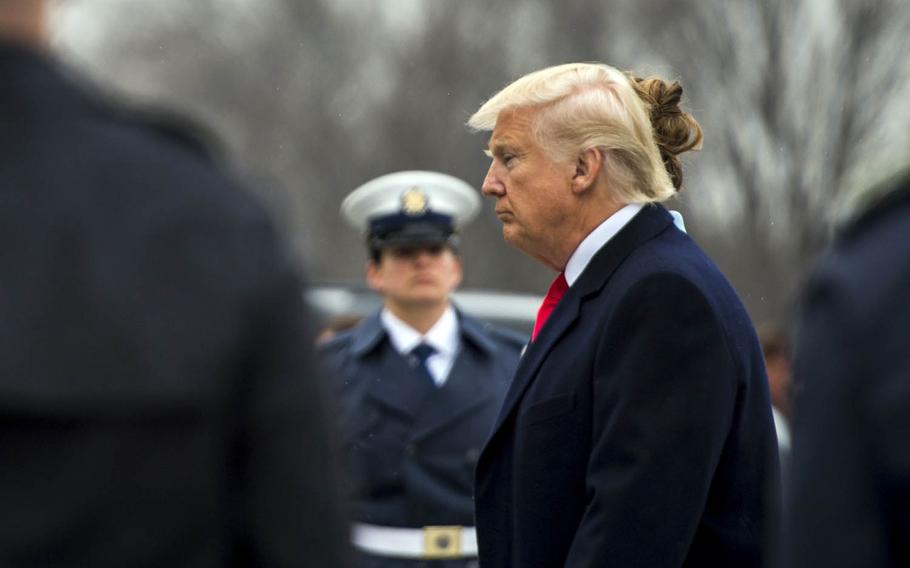 Seoul has rebuffed a suggestion by President Donald Trump that South Korea should pay the $1 billion cost for an advanced U.S. missile defense system being deployed on the divided peninsula. (Marianique Santos/U.S. Air Force)

Seoul has rebuffed a suggestion by President Donald Trump that South Korea should pay the $1 billion cost for an advanced U.S. missile defense system being deployed on the divided peninsula. (Marianique Santos/U.S. Air Force) 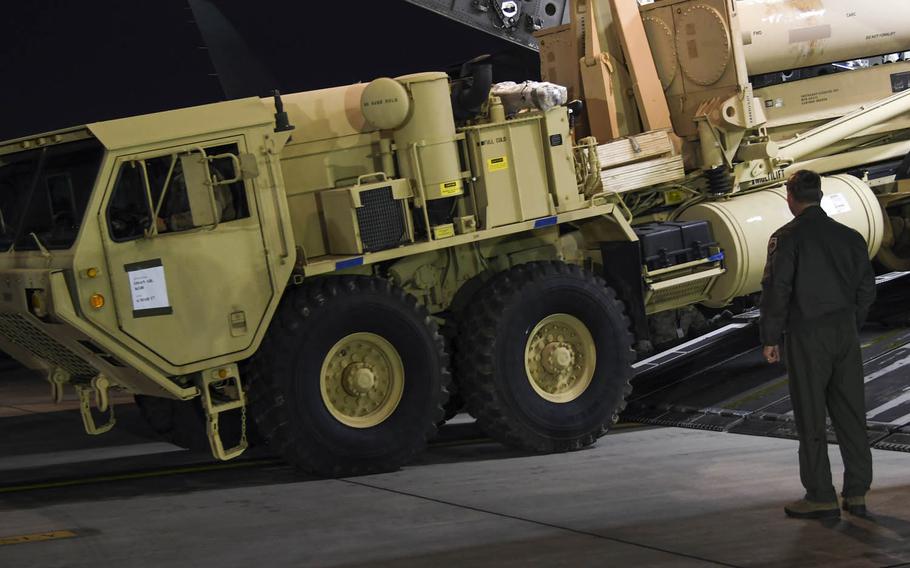 Elements of a Terminal High Altitude Area Defense system arrive on the Korean Peninsula in March. (Courtesy of USFK)

South Korea’s military quickly rejected Trump’s suggestion, which was made Thursday in an interview with Reuters.

The Ministry of National Defense said Seoul is responsible for providing the land and basic facilities for the Terminal High Altitude Area Defense System, while Washington should pay costs for the deployment and operational work.

“Our basic position remains unchanged,” the ministry said Friday in a statement that cited the status of forces agreement between the two longtime allies.

Trump’s comments took THAAD’s supporters and opponents by surprise. Many South Koreans took to Twitter to say they never wanted the system in the first place.

Both leading candidates in the May 9 snap election called for transparency about the negotiations leading up to the THAAD agreement between the U.S. and ousted President Park Geun-hye’s government.

The United States and South Korea agreed after months of talks last year to deploy THAAD to counter the growing threat from North Korea. But the decision met fierce opposition from local residents and China, which fears it could be used against its own military.

Critics also have accused the U.S. and South Korean militaries of rushing to install the system before the election, which is expected to usher in a liberal government that may reconsider the deployment.

Washington and the current government in Seoul say the system is needed to protect allied forces as well as the local population. But Thursday’s remarks were the first time Trump has publicly suggested South Korea should foot the bill.

“I informed South Korea it would be appropriate if they paid. It’s a billion-dollar system,” Trump told Reuters. “It’s phenomenal, shoots missiles right out of the sky.”

Representatives of frontrunner Moon Jae-in of the liberal Democratic Party reiterated his stance that the next government should be allowed to review the decision about deploying the THAAD and called for all work on the system to be suspended in the meantime.

Ahn Cheol-soo of the smaller left-leaning People’s Party, the runner-up in recent polls, has lifted his earlier opposition to THAAD as he courts the conservative vote.

But his camp said Trump’s words suggested there had been back-channel negotiations over the issue. “That would be lying to the South Korean people,” Ahn’s spokeswoman Nemo Kim said.

“He’s not reversing his position on THAAD, but he doesn’t believe South Korea should pay for this,” she said. “The current South Korean government should make things clear to its people what happened during the negotiation process.”

Tensions over the issue were already high as many connect the system’s deployment with Park, who was ousted and jailed over a corruption and influence-peddling scandal.

Protests broke out Wednesday after U.S. trucks carried several components of the THAAD to its new home in the farming area of Seongju in an overnight operation despite the fact that a promised environmental assessment has yet to be completed.

South Korea’s vital tourism and entertainment industries also have been hit hard by a series of what South Korea says are unfair economic retaliatory measures by Beijing.

“This weapon that isn’t doing us any good is being deployed. Why must we pay for it?” one Twitter post read. “Rather we must be compensated by China for economic retaliation.”

Critics also say THAAD is being positioned to protect U.S. forces and ports in the south but will not be able to stop North Korea from attacking Seoul. Military officials say it will be part of a layered defense system that includes Patriot missiles to cover the whole country.

THAAD has six truck-mounted launchers that can fire up to 48 interceptor missiles designed to knock out incoming targets at high altitudes.

Trump also told Reuters he will either renegotiate or end a 5-year-old free trade agreement with South Korea, blaming former presidential candidate Hillary Clinton for making what he called a “horrible” deal when she was secretary of state.

“It’s a horrible deal, and we are going to renegotiate that deal or terminate it,” he said.

The president made similar comments on the campaign trail, prompting worry in South Korea about its longstanding alliance with the U.S. He had seemed to dial them back and pledged to maintain the nation’s “ironclad commitment” to defend the South after taking office on Jan. 20.

Many experts believe it already has the capability to strike U.S. bases and other targets in South Korea, Japan and possibly Guam.

Trump has warned that all options, including military strikes, are on the table in dealing with North Korea’s missile program, which goes against U.N. Security Council resolutions banning it from using ballistic technology. But Pyongyang has remained defiant despite punishing economic sanctions and international condemnation.