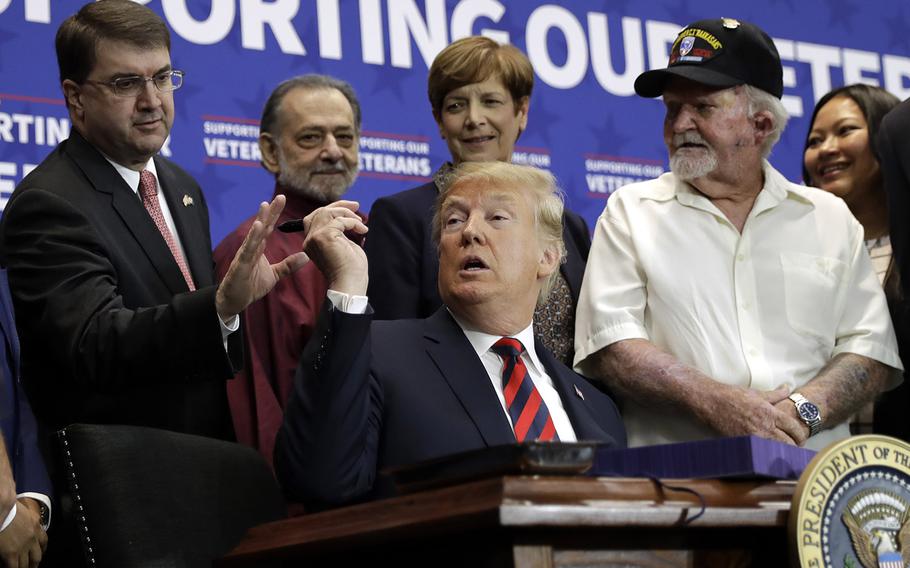 WASHINGTON – President Donald Trump on Friday signed a spending bill for the Department of Veterans Affairs that for the first time exceeds more than $200 billion.

After Trump signed the bill, he joked Wilkie is the one who “has got to make it work.”

“We are on the cusp of the greatest transformative period in the history of veterans affairs,” Wilkie said. “The signing today gets us on that road.”

The budget, passed by Congress last week, totals $208.8 billion. It’s another in a series of increases for the agency, which had a budget of $90 billion in 2009.

The spending agreement provides some funding to implement the VA Mission Act – legislation that aims to expand private-sector medical care for veterans starting in July 2019.

The Office of Management and Budget estimated the implementation of the Mission Act would create a $1.6 billion shortfall in 2019 in the account used to pay for veterans’ private-sector treatment.

The Mission Act was signed into law with fanfare this summer, but Trump’s administration asked Congress not to break spending caps to pay for it. In the end, lawmakers shifted $1.25 billion to cover some of the cost instead of approving new funding – a move some Democrats opposed.

In the budget, lawmakers set aside $8.6 billion for mental health care programs, including $206 million for suicide prevention efforts. It directs $400 million to the VA’s Opioid Safety Initiative, $779 million to medical and prosthetic research and $1.8 billion to homeless veteran programs

It also provides $2 billion to address a backlog of maintenance issues at VA facilities, as well as $1.1 billion to begin a massive project to overhaul the VA’s electronic health record system.

“We’re fighting to make sure you get the care you so richly earned, and today’s legislation is one more promise that the Trump administration is keeping,” Trump told a crowd of mostly veterans Friday.

Outside the Las Vegas VA were protesters organized by the American Federation of Government Employees, a union representing VA workers. The union has been pushing for the VA to fill its thousands of job vacancies.