Trump scolds NATO on spending as allies aim to please 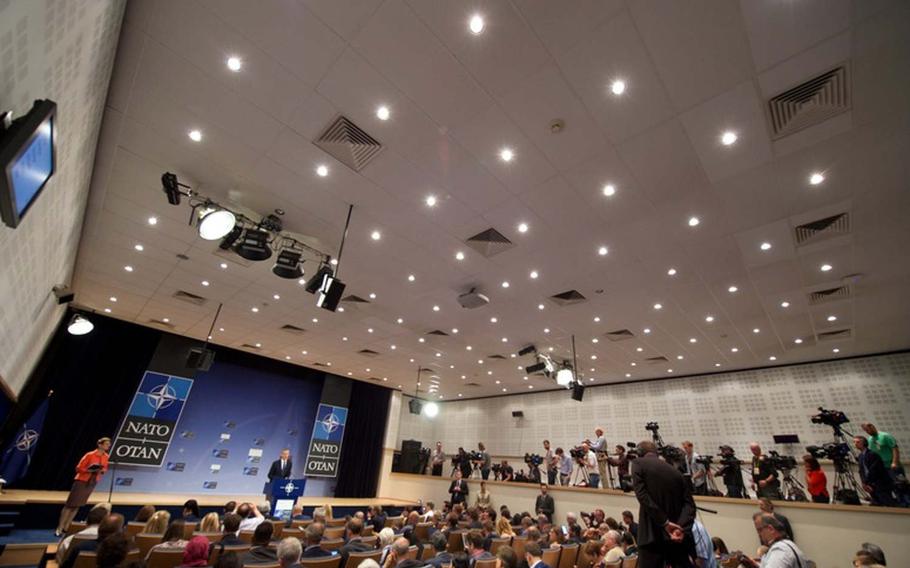 Journalists listen as NATO Secretary-General Jens Stoltenberg speaks ahead of a meeting of NATO heads of state in Brussels, Thursday, May 25, 2017. (NATO)

Journalists listen as NATO Secretary-General Jens Stoltenberg speaks ahead of a meeting of NATO heads of state in Brussels, Thursday, May 25, 2017. (NATO) 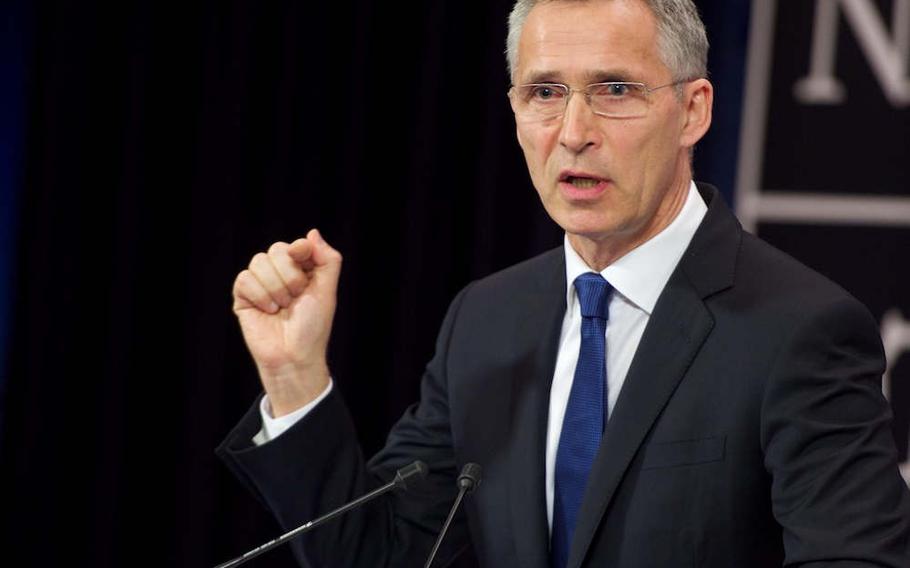 NATO Secretary-General Jens Stoltenberg speaks before a news conference before a meeting of NATO heads of state and government in Brussels, Thursday, May 25, 2017. U.S. President Donald Trump, who has called on member states to increase their funding of the alliance, was set to address the summit. (Photo courtesy of NATO) 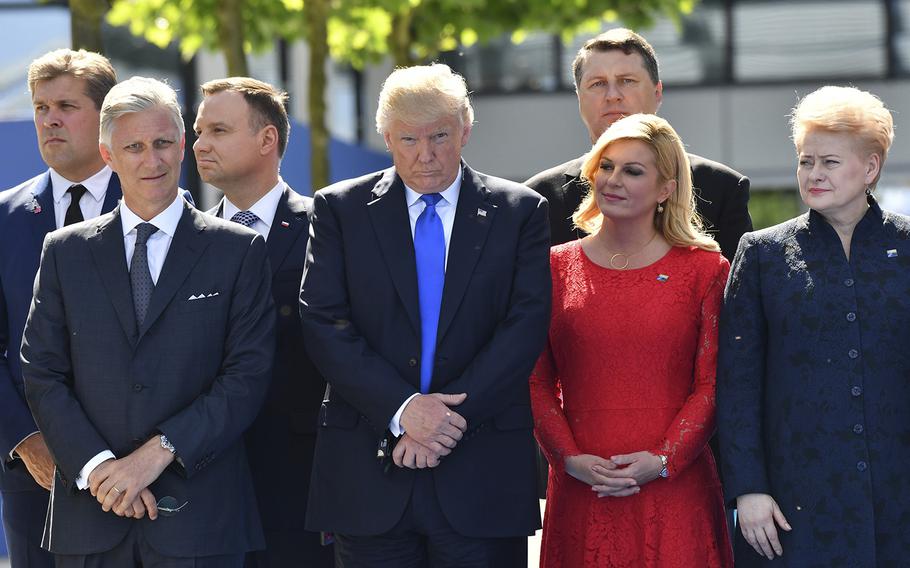 BRUSSELS — President Donald Trump scolded allies on Thursday for their failure to invest enough money in their defense, saying members must not only increase expenditures but also make up for years of military neglect.

In the future, NATO must also focus more on counterterrorism and managing the flow of migrants into Europe, Trump said.

“You have thousands and thousands of people pouring into our various countries and spreading throughout,” he said at a one-day NATO summit in Brussels. “The NATO of the future must include a great focus on terrorism and immigration as well as threats from Russia.”

To do that, Trump said, all allies must meet NATO’s own benchmark by dedicating at least 2 percent of their gross domestic product to their militaries. Currently, only five of 28 allies reach that mark. He went even further in suggesting that allies need to make up for past years of underinvestment, a notion that members are likely to reject.

“Even 2 percent is insufficient to close the gap in readiness,” Trump said, who stopped short of offering strong support for Article 5 of NATO’s founding document, which asserts that an attack on one member demands a response from all. It had been expected that the president, who in the past has said that the U.S. security guarantee could be contingent on allies’ paying their fair share, would be unequivocal about collective security. Instead, he said nothing on the matter.

Trump’s brief comments came during the dedication of a 9/11 memorial at NATO’s new $1.2 billion headquarters. They were in line with Trump’s past critiques of allies, but they took some observers by surprise.

“For him to start off like that at this solemn occasion, with such an aggressive and hostile tone, emphasizing this aspect of spending, was counterproductive and disgraced what they were trying to do with that memorial there,” said Jorge Benitez, a NATO expert with the Atlantic Council, who is attending the summit. “I think this administration came in unprepared.”

Over the past several months, NATO has scrambled to address Trump’s concerns.

Allies will also answer a demand by Trump to establish annual plans to ensure members meet defense spending targets, Stoltenberg said, in a move designed to hold members to account if they fail to increase military expenditures.

“These (annual plans) will set out how NATO allies intend to meet their pledge so that we continue to match words with action,” Stoltenberg said at the start of Thursday’s talks.

In the past, the new U.S. president has been highly critical of NATO, which he has called “obsolete.” But more recently he has softened his view on the 68-year-old military pact, particularly as the military alliance has sought to highlight the ways in which it supports U.S. counterterrorism efforts.

If all members met spending targets, allies would have an additional $119 billion for collective defense, Trump said.

Stoltenberg dismissed the notion that NATO’s joining the coalition was mere symbolism, calling it a “practical platform” to coordinate efforts.

He said individual alliance members already contribute to the coalition, adding that NATO will expand the deployment of its AWACS surveillance aircraft to improve the coalition’s view of the battlefield, help in air-to-air refueling and provide training to Iraqi forces.

Besides establishing a new counterterrorism fusion cell, allies will agree at future forum to an “action plan” on fighting terrorism and will appoint a new coordinator to oversee such efforts, he said.

Trump’s past criticism of NATO’s counterterrorism fight has confused some allied governments, which have deployed tens of thousands of troops to Afghanistan during the lengthy military campaign there. NATO now has 13,000 troops in Afghanistan, and the Trump administration is weighing whether to increase that number.

Though allies are scheduled to discuss future troop levels in Afghanistan at Thursday’s conference, a final decision is unlikely.

Trump is likely to consider NATO’s agreement to develop annual plans to track allied defense spending as a political win. Some members, such as Germany, have balked at Trump’s repeated attacks on how allies fund their militaries.

Canada spends less of its economic output on defense than many allies, yet it has troops in Iraq, was a key player in Afghanistan, and now leads a multinational battalion in the Baltics. Meanwhile, Greece is one of five nations spending more than 2 percent but has a minimal role in NATO operations.

Still, Trump has forced the matter onto NATO’s agenda with threats that the U.S. could “moderate” its support if allies don’t do more.

Those threats have sparked concern that the U.S. commitment to defending fellow members from attack may not be ironclad. Trump reiterated his complaint that the U.S. carries a disproportionate share of the security burden.

“This is not fair to the people, the taxpayers of the United States,” Trump said.

During the Cold War, the United States accounted for about half of total defense spending by NATO members, compared with about 65 percent now. However, even before Trump’s election, allies began to reverse the trend. Military budgets began to rise for the first time in years because of worries about a more assertive Russia.

“In 2015, cuts came to a stop. And in 2016, total spending across Europe and Canada increased by billions of dollars,” Stoltenberg said. “This is not just about cash. But also modern capabilities. And meaningful contributions to NATO’s missions, operations and engagements.”