Trump says US ‘very protective’ of the Baltics The USS Arlington is moored in preparation to go underway to participate in BALTOPS 2017, an annual maritime exercise in the Baltic Sea region. The U.S. and Russia have stepped up military drills in the Baltic region. (Sara Grooms/U.S. Navy)

The USS Arlington is moored in preparation to go underway to participate in BALTOPS 2017, an annual maritime exercise in the Baltic Sea region. The U.S. and Russia have stepped up military drills in the Baltic region. (Sara Grooms/U.S. Navy) 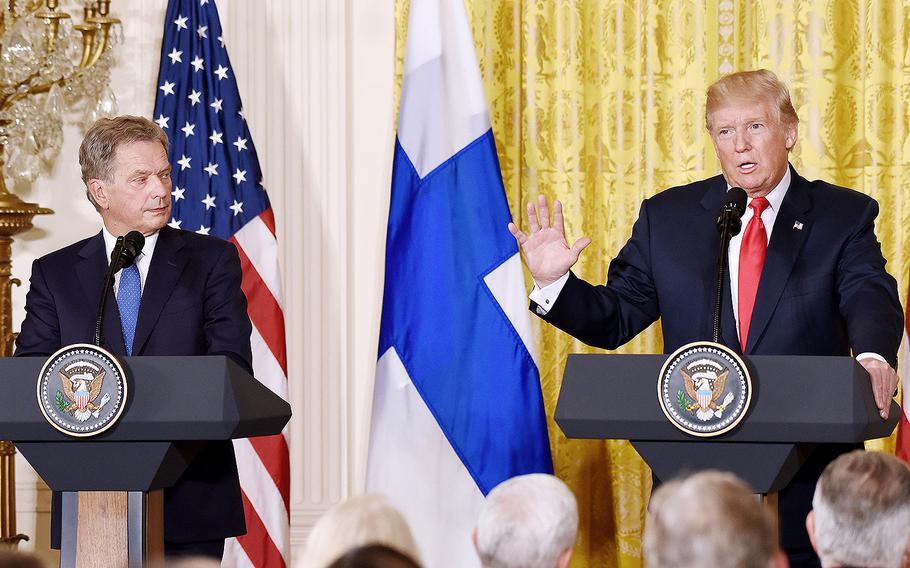 President Donald Trump holds a joint press conference with President Sauli Niinisto of Finland in the East Room of the White House on Aug. 28, 2017 in Washington, D.C. (Olivier Douliery/Abaca Press/TNS)

President Donald Trump declined to single out Russia as a threat to the West during a news conference Monday but said America was ready to defend its interests in the Baltics if they are threatened.

Flanked by Finnish President Sauli Vainamo Niinisto, Trump was asked if he regarded Russia as a threat, but the U.S. president balked and said he remains hopeful that the U.S. will establish warmer ties with Moscow. Unlike with other adversaries and rivals such as China, Trump has been reluctant to take a tough rhetorical line on Russia.

“Well, I consider many countries as a security threat, unfortunately, when you look at what’s going on in the world today,” he said when asked about Russia.

“I say it loud and clear. I’ve been saying it for years: I think it’s a good thing if we have great relationships, or at least good relationships with Russia. That’s very important, and I believe someday that will happen.”

Trump’s mixed messages on Russia have caused confusion and elicited concern in some parts of Europe.

Niinisto said a boost in alliance operations around the Baltic Sea are “most important” for Finland, a non-NATO member but close U.S. military partner.

The U.S. and Russia have stepped up military drills in the Baltic region. Moscow recently conducted joint naval exercises in the Baltic Sea with China for the first time.

Political tensions and more military congestion in the region have some worried about potential military miscalculations that could increase the risk of events spiraling out of control.

“So we have to be very careful that this huge training, huge military trafficking over politics doesn’t cause any accidental problems,” Niinisto said.

While Trump’s political opponents have blasted the president for his conciliatory language on Russia, little has changed in U.S. military policy since Trump took office. The White House’s budget calls for about $1 billion more for operations aimed at deterring Russian aggression and reassuring allies in Eastern Europe.

“And so I would consider many countries threats, but these are all threats that we’ll be able to handle if we have to,” Trump said. “Hopefully, we won’t have to handle them, but if we do, we will handle them.”