Trump says US forces in Afghanistan to be slashed to fewer than 5,000 this year 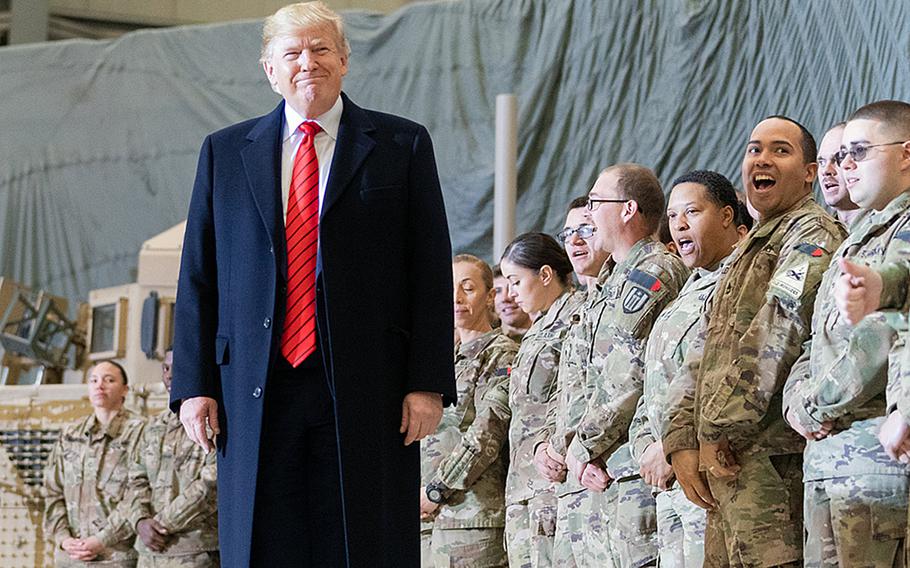 President Donald Trump visits troops at Bagram Airfield, Afghaistan on November 28, 2019, during a surprise Thanksgiving stopover. Trump said in an interview with Axios that aired Aug. 3, 2020, that he expects fewer than 5,000 U.S. troops to remain in Afghanistan by November. (Shealah Craighead/White House)

President Donald Trump said he expects fewer than 5,000 U.S. troops to be in Afghanistan by November and called America’s wars in the Middle East the “biggest mistake” in the country’s history during a television interview this week.

“We’re largely out of Afghanistan,” Trump said in an interview with Axios aired on HBO Monday. “It’s already planned. … We’ll be down in a very short period of time to 8,000, then we’re gonna be down to 4,000. We’re negotiating right now, we’ve been there for 19 years — 19 years — we’ll be getting out.”

The U.S. has already withdrawn about a third of its troops, bringing the number to about 8,500, following a peace agreement signed with the Taliban in February that also calls for a full withdrawal by next summer if certain conditions are met, including the Taliban’s breaking of its ties with al-Qaida.

The current troop numbers are about what they were when Trump took office in 2017, before numbers ramped up again to about 14,000 under a strategy meant to pressure the militants into peace negotiations.

There will be “probably anywhere from 4,000 to 5,000” troops in Afghanistan by Election Day in November, Trump said in the interview, recorded last week. He said it would be 4,000 “very soon,” but declined to say when.

The president also boasted that he “took out” ISIS in Iraq and Syria, killed the group’s founder, Abu Bakr al-Baghdadi, in Syria last October, and assassinated Iran’s Maj. Gen. Qassim Soleimani in Baghdad this January.

“I’ve done things that no other president has done,” he said. “They should have never been in the Middle East. The decision to go to the Middle East … was the single biggest mistake made in the history of our country. That’s my opinion.”

With the Afghan war in its 19th year, many critics believe much of the U.S. mission is no longer justified. Trump’s challenger in the upcoming election, former Vice President Joe Biden, said earlier this year that the U.S. should be there only to prevent terrorist groups from threatening the U.S.

“That requires a much smaller footprint,” he said on CBS’s “Face the Nation,” days before the U.S.-Taliban peace agreement was signed Feb. 29. That, he said, would mean “several thousand people.”

Some lawmakers, however, fear a hasty troop drawdown without appropriate measures in place to ensure the Taliban lives up to its promises could destabilize the country.

In a bipartisan vote last month, the House approved a measure restricting the administration from drawing down troop levels to fewer than 8,000 without first certifying that security and counterterrorism efforts would not be harmed. The measure still must gain Senate approval to take effect.

A United Nations monitoring team also found recently that the Taliban relationship with al-Qaida, which was to be severed under the terms of the February agreement, remained “close, based on friendship, a history of shared struggle, ideological sympathy and intermarriage.”

Axios published parts of the interview last week in which Trump said that he had not talked with Russian President Vladimir Putin about reported intelligence that Russian officials had offered the Taliban bounties for killing U.S. troops in Afghanistan. He dismissed the reports as not credible.

“Russia doesn’t want anything to do with Afghanistan,” Trump said, harkening to the decadelong war Moscow waged in the country in the 1980s that is credited with helping break up the Soviet Union.