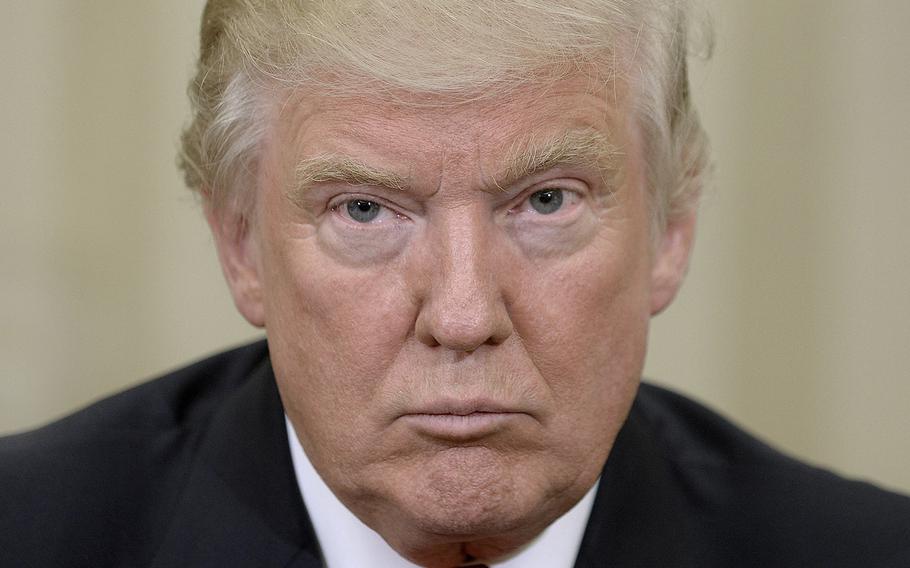 President-elect Donald Trump looks on in the Oval Office of the White House on Thursday, Nov. 10, 2016 during a meeting with U.S. President Barack Obama in their first public step toward a transition of power in Washington, D.C. (Olivier Douliery, Abaca Press/TNS)

WASHINGTON — After years of being squeezed, troops and their families are hoping for higher pay raises and the surprise victory of Donald Trump might make that more likely — even before the president-elect takes office in January.

Congress has been debating whether to risk President Barack Obama’s veto by adding $18 billion to the annual defense budget and giving troops the highest pay raise in years. Trump’s election might now embolden Republican lawmakers to press harder this year for that money, or at least a chunk of it, now that it is certain their party has claimed the White House, according to budget experts.

Military pay raises have been held to less than 2 percent since 2011, below that of private sector wage growth, while troops and families have been stressed by deployments. The pay issue has become a top concern and the nonprofit National Military Family Association wrote an open letter to Trump after Tuesday’s election asking that it be made a priority.

Overworked and feeling “nickel-and-dimed,” the military wants the president and Congress to provide the 2.1 percent raises that it is supposed to receive under law, said Joyce Wessel-Raezer, executive director of the association.

“If a new administration would say, ‘We are going to find a way in our budget to give you the full increase that is in law,’ that would be a huge message,” she said.

Congress has been debating for months the possibility of the higher raise as part of the $602-billion defense budget but the raise depends on an additional $18-billion hike. The Armed Services committees in the House and Senate – both controlled by the Republican majority – are split on whether to push ahead with the hike against Obama’s veto threat and an insistence by Democrats that each dollar be matched with more domestic spending.

But the earlier defense budget calculus by Republicans might have changed Tuesday when Trump pulled off a sweeping victory that shocked many pundits and poll watchers. Election polling had indicated Trump would likely lose to Democrat Hillary Clinton and Democrats could make gains in Congress, meaning an even dimmer political outlook for Republicans next year.

“They thought they might lose the Senate and they might as well get the best [budget] deal they could … now I think there is a feeling they could push much harder. I expect them to be more aggressive than they would have been otherwise,” said Mark Cancian, senior adviser for the international security program at the Center for Strategic and International Studies, a bipartisan think tank in Washington, D.C.

Obama might now be less likely to follow through with his veto threat and Democrats in Congress might be more willing to make a deal knowing Republicans will have more control and leverage next year when Trump proposes his first defense budget, said Sarah Binder, a senior fellow at the Brookings Institution, a nonpartisan think tank in Washington, D.C.

“I think the thing is, this level of spending pales in comparison to the level of challenges coming next year,” Binder said.

Earlier this year, the Senate Armed Services Committee and its chairman, Sen. John McCain, R-Ariz., opted to avoid a political fight with the Democrats. It crafted a defense bill that called for the 1.6-percent troop pay raise requested by Obama.

But the House Armed Services Committee and its chairman, Rep. Mac Thornberry, R-Texas, spearheaded a 2.1-percent raise and the $18-billion hike despite the veto threat.

Now, the two committees are set to return to Washington on Monday and continue negotiating a final deal, which could include some or all of the House’s hike. Congress has been in recess since September.

The Republican lawmakers could be emboldened by the election to push Congress and the president for more, said Justin Johnson, a senior defense budget policy analyst at the Heritage Foundation, a conservative think tank in Washington, D.C.

“I think now you have a situation where the Republicans on the committees can almost dare President Obama to veto it,” Johnson said. “It certainly it gives them more flexibility.”