Trump’s 'Space Force' confounds some, thrills others on Capitol Hill 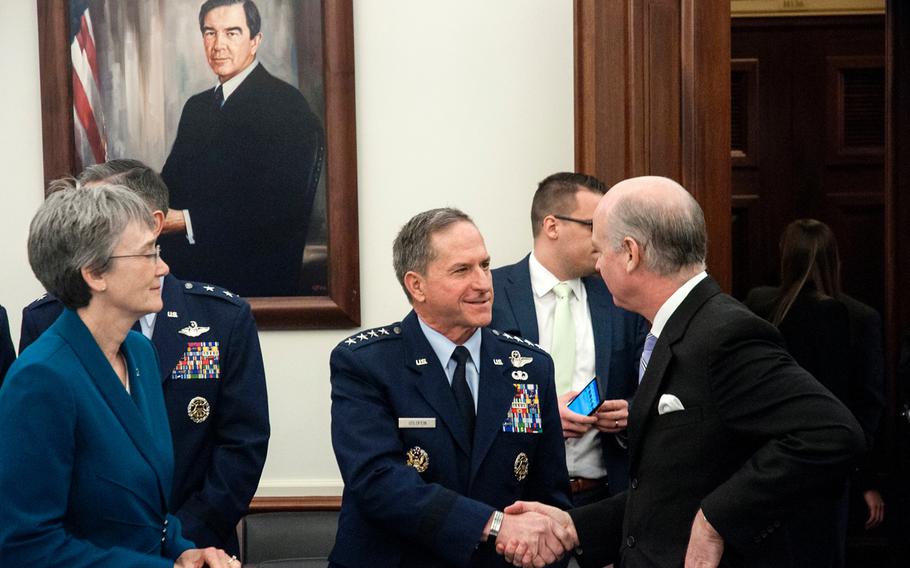 Buy Photo
Air Force Chief of Staff Gen. David Goldfein shakes hands with U.S. Rep. Robert Aderholt, R-Ark., prior to the start of a House Appropriations Subcommittee on Defense budget hearing on Capitol Hill in Washington, D.C., on Wednesday, March 14, 2018. Looking on at left is Secretary of the Air Force Heather Wilson. (Carlos Bongioanni/Stars and Stripes)

WASHINGTON — President Donald Trump on Tuesday was giving one of his typical rowdy, campaign-style speeches to Marines in California when he pitched the idea of a “Space Force” as if he had derived it all on his own.

But the quick details that Trump offered at Marine Corps Air Station Miramar seemed to mirror an existing House plan to create a “Space Corps.”

“I don’t know what he meant,” retired Gen. Robert Kehler, former commander of U.S. Strategic Command, told the House Armed Services Committee when asked about a Space Force. “What should he have meant, is really, another question of what we should do.”

The discussion of a new Space Corps could play a role in proposed policy plans for the 2019 National Defense Authorization Act. Trump’s comments might have drawn quips referring to fictional, intergalactic fights, but some military leaders and lawmakers took the president’s pitch seriously.

“Space is a war-fighting domain, just like the land, air and sea. We may have even have a ‘Space Force,’” Trump told servicemembers in San Diego. “You know I was saying it the other day because we are doing a tremendous amount of work in space. I said maybe we need a new force, we’ll call it the ‘Space Force.’ And I was not really serious. And then I said, ‘What a great idea, maybe we’ll have to do that’.”

Last year, House lawmakers gave approval to a Space Corps proposal, but the Senate – driven in large part by opposition from Defense Secretary Jim Mattis and other Pentagon leaders – rejected the plan. Instead, the 2018 NDAA directed for a study of the Space Corps proposal, which is due in December.

Rogers and Cooper estimated last month during a forum at a Washington D.C. think tank that a new Space Corps Command could be in place in the next three to five years. The two lawmakers also detailed the struggles that they face in forming the command, including pushback from the Air Force, where the new Space Corps would be formed.

The topic dominated the opening of a House subpanel hearing Wednesday on the Air Force’s 2019 budget proposal.

“The president made a statement suggesting the administration supports the idea of a space force,” Rep. Kay Granger, R-Texas, chairwoman of the House Appropriations Committee defense subpanel, said in questioning top Air Force leaders about their opposition. “Both of you and Secretary Mattis have expressed concern about this in the past.”

“As the president said yesterday, the new National Defense Strategy for space recognizes that space is a warfighting domain,” Wilson said, dodging specifics on why there’s opposition to the plan. “We appreciate the president’s and the vice president’s leadership on space.”

On Wednesday, Rogers said he was pleased to hear it.

“Talking about this is very important,” he said.

Doug Loverro, former deputy assistant secretary of defense for space policy for the department of defense, told the House Armed Services Committee that while he was also confused by Trump’s remarks, it should fuel focus on protecting space just like sea, land, air and cyberspace.

“I don’t know what the president meant,” he said. But “we lack that focus for space, one of our major five warfighting domains. I may be biased, but I think [it is] one of the most important.”

“It appeared he was thinking off the cuff and he had not looked into the history,” Harrison said. “This is something that has been an ongoing discussion for at least two decades. I think what he should have meant – and there were some hints of this in his remarks – is that …we need to look at reorganizing our military around this domain.”