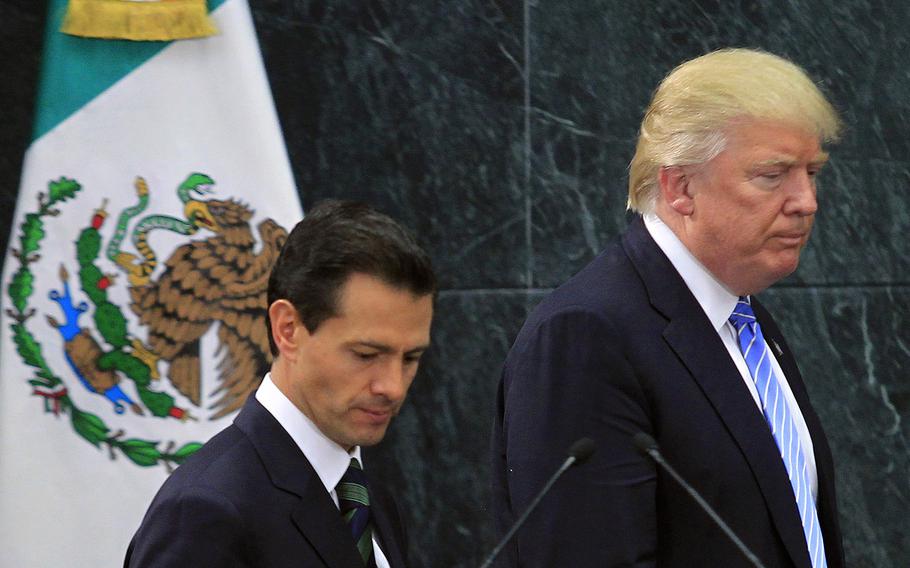 SAN ANTONIO — Latin America experts are at odds to predict President-elect Donald Trump’s security strategy for the region, an issue largely absent from the campaign trail and three presidential debates.

However, Trump made immigration and border security a cornerstone of his campaign, including the construction of a wall along the U.S. southern border of Mexico and the potential deportation of millions of immigrants here illegally.

His focus on physical barriers will likely include heightened security measures, including more troop deployments and aerial drone surveillance, said Jeffrey Addicott, director of the Center for Terrorism Law at St. Mary’s University in San Antonio.

“We can expect President Trump to increase federal funding to have more National Guard boots on the ground” along the 2,000-mile southern border, Addicott said, adding the Coast Guard will also likely see a boost in funding and personnel operating in the Gulf of Mexico to combat human and drug trafficking.

A Texas National Guard spokeswoman declined to offer any details about ongoing deployments there, but acknowledged operational presence both on the border and deep into Texas to combat drug trafficking.

The future of security aid packages to Mexico is unclear, Addicott said. One vital to the partnership is the Merida Initiative, an effort to bolster security cooperation against drug trafficking organizations, at a cost of $2.3 billion since 2008.

The ongoing initiative has focused on strengthening intelligence and information sharing between the two nations, as well as equipment procurement, including more than two dozen Blackhawks sent to Mexico since 2010.

A Trump-led cabinet may not be inclined to fund efforts such as the Merida Initiative, Addicott said.

“We all know the government in Mexico is corrupt at some levels,” he said. “The solution is not to just throw money at problems. We need to find ways to incentivize Mexico to prioritize their security assets.”

The Mexican Navy in 2007 established a foreign liaison officer at U.S. Northern Command, which bolstered coordination and communication in joint training and operational efforts, Moyano said in the report.

A liaison also works with U.S. Southern Command and its Florida-based Joint Interagency Task Force-South. Its satellite covers hemispheric surveillance and has aided Mexico with intelligence to interdict drug smuggling, Moyano said in the report.

He has followed U.S. and Mexico military relations for years, and said only recently has he heard the word “ally” used on both sides of the border to describe a partnership built on political will and intense trust building exercises, he said Thursday in an email exchange with Stars and Stripes.

“Candidate Trump’s rhetoric towards Mexico and Mexicans did not help towards strengthening the relationship,” Moyano said, alluding to comments Trump made during his presidential bid announcement in 2015, characterizing Mexican immigrants as rapists and drug runners.

“President-elect Trump has a chance to change that narrative,” Moyano said. “There is a risk that the current U.S. and Mexico objectives will be disrupted by a change in U.S. policy towards engagement with Mexico.” Continental security remains their primary shared objective, he said.

The fate of U.S. security objectives in Central and South America is even more murky.

Trump’s foreign policy remarks have focused on scaling back NATO commitments, improving relations with Russia and aggressively pursuing the Islamic State group, leaving analysts to guess what policy in Latin America might look like.

Southern Command holds a primary objective of becoming the partner of choice in its area of operations, a competition against powers such as Russia and China to strengthen bonds in the Caribbean and Central and South America. Scaling back those objectives could prove costly, Moyano said.

“I see a clear and present danger if the U.S. disengages from its current positive posture or withdraws altogether from the region. The U.S. will lose credibility in that case, and other actors will be able to step in to try to fill that void,” Moyano said.

“China already maintains increasing economic and trade relations with the region that could take on a military or security dimension as well.”

Southern Command has also prioritized military competency in Central America, where it trains and advises partner nations to conduct security operations and drug interdiction in some of the world’s most violent cities.

Congress earmarked $750 million in 2016 for economic and development programs there, along with military training assistance, partly in response to the wave of 60,000 unaccompanied minors who crossed the U.S. border after fleeing violence in the region, particularly in Honduras and El Salvador.

That kind of support may be in jeopardy under the Trump administration, said James Bosworth, the CEO of the Latin America-focused strategic advisory firm Southern Pulse. He took to Twitter after the election to say Trump’s administration will likely spend less attention and resources in the region.

Addicott waved off those concerns. He believes the objective to strengthen relationships between U.S. and Latin American militaries will continue under Trump. He is critical of the Obama administration, which he believes has not led with strength in the region. That will change next January, he believes.

“I think our goal should be for countries to respect us, not like us,” he said.