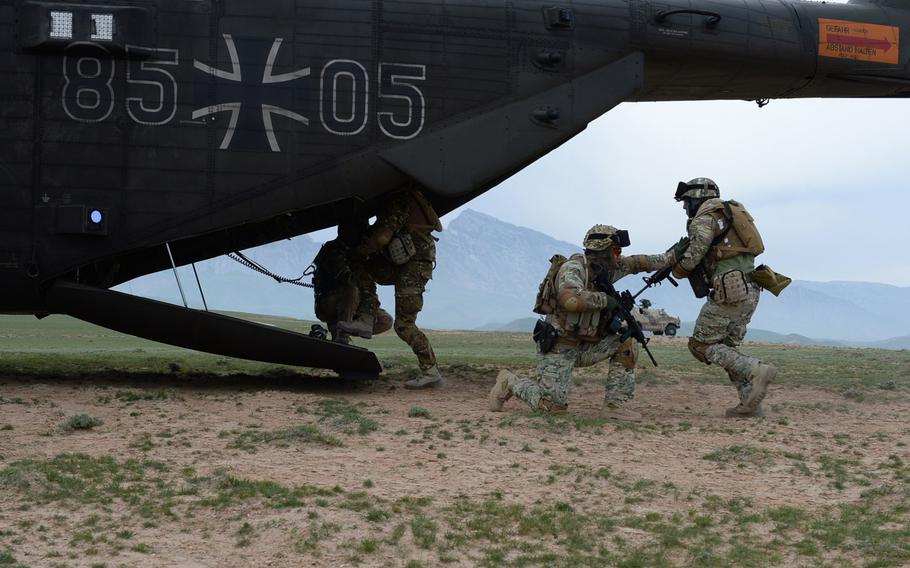 President Donald Trump has demanded NATO allies commit more troops to the mission in Afghanistan “in line” with planned U.S. increases, but the source of those forces is unclear for an alliance that has pledged more support but only in small numbers.

NATO’s top official on Tuesday welcomed Trump’s announcement that the United States would continue its mission in the 16-year-old war, saying allies were already on board with continuing its advisory mission in Afghanistan.

“NATO remains fully committed to Afghanistan and I am looking forward to discussing the way ahead with (U.S. Defense) Secretary (Jim) Mattis and our allies and international partners,” Secretary-General Jens Stoltenberg said in a statement.

More than 15 NATO members have already pledged to boost their force contributions to Afghanistan, where there are currently about 6,600 non-U.S. troops. But so far NATO has not said how many more soldiers have been offered, and early signs from major alliance members suggest limited increases. NATO now must open a force-generation process that will likely require the alliance’s European members and Canada to come up with additional troops even as allies attempt to focus more on security concerns in their own backyard to counter a more assertive Russia. The allies and partner nations have historically contributed up to 40 percent of the coalition forces in Afghanistan.

The U.S. is expected to increase its troop numbers there by 4,000, which would bring the total American presence to about 12,400.

“We will ask our NATO allies and global partners to support our new strategy, with additional troop and funding increases in line with our own. We are confident they will,” Trump said in a speech Monday.

Some allies have already indicated how many troops they will add in Afghanistan. Poland, which has 200 soldiers currently serving there, has said it intends to boost that number to 230. Britain has 585 troops in Afghanistan, and an additional 85 advisers have already been pledged.

“The U.S. commitment is very welcome,” Michael Fallon, Britain’s defense secretary, said in a statement. “It’s in all our interests that Afghanistan becomes more prosperous and safer: That’s why we announced our own troop increase back in June.”

However, Fallon did not indicate any plans to increase British forces beyond what it has already pledged.

Allies in the east, who are concerned about Russia and dependent on U.S. security guarantees, could seek to ramp up their contributions to show solidarity with a U.S. administration. But that would also force nations such as those in the Baltics to deploy troops abroad at a time of security angst at home. Non-NATO member Ukraine, which has hopes of more Western support in the form of lethal weaponry for its war against Russian-backed separatists, also could be inclined to add troops in Afghanistan in an attempt to win favor.

But for some countries, such as Germany, there could be reluctance to fall into line with the deeply unpopular Trump, especially during an election season in which the appearance of answering the U.S. president’s demands could be a political liability.

Chancellor Angela Merkel has said that Berlin will continue its current training effort in northern Afghanistan but that NATO shouldn’t expect much more.

“I don’t think we’re first in line to expand our capacities there,” Merkel said in May.

If Trump aims to get several thousand more troops out of NATO, that could be a “heavy lift,” said Judy Dempsey, an expert on NATO with Brussels-based think tank Carnegie Europe.

“This is difficult for Trump, for the U.S. generals and for NATO,” she said. “It is very hard to know if there is a big appetite from NATO allies to go along with this. The bottom line is the mission in Afghanistan hasn’t been a success.”

The U.S. is likely to look to the Republic of Georgia, a tiny country with NATO ambitions, to keep its outsize force in Afghanistan. For several years, Georgia has been among the mission’s top contributors. It now has deployed 870 troops, making it the largest per capita contributor of any country.

“We will continue this contribution with the same number,” Georgian Defense Minister Levan Izoria said during NATO’s May summit in Brussels.

At the summit, the alliance formally agreed to continue with its training and advisory mission but determined it would return to a combat role that was given up in 2014.

“Today, we continue to train, advise and assist them, and provide them with financial support,” Stoltenberg said on Tuesday. “Our aim remains to ensure that Afghanistan never again becomes a safe haven for terrorists who would attack our own countries.”