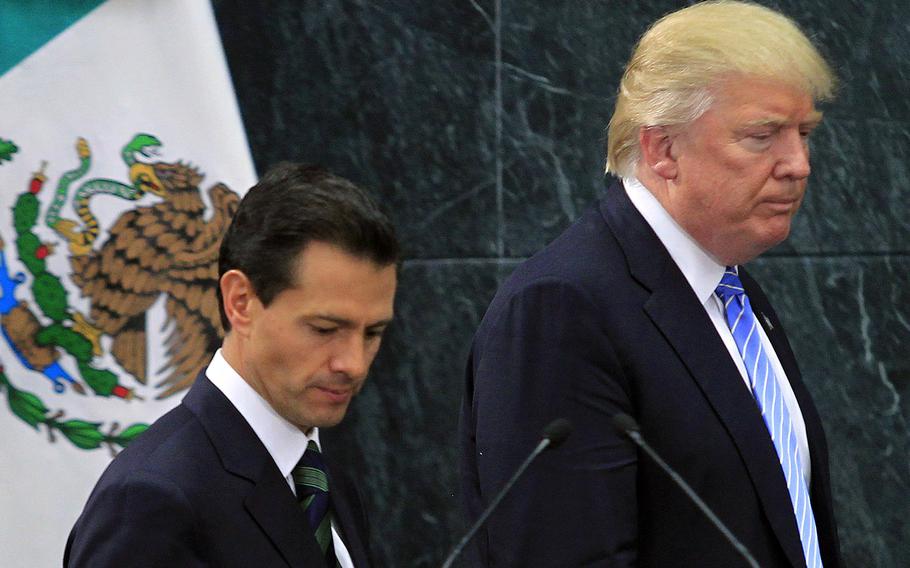 SAN ANTONIO -- Recent political spats between the United States and Mexico, including President Donald Trump’s comments that he might send U.S. troops to Mexico, could negatively impact the military relationship between the two countries, security analysts said.

“You have a bunch of bad hombres down there,” Trump told Mexican President Enrique Pena Nieto during a phone call Wednesday, according to an excerpt leaked to the Associated Press. “You aren’t doing enough to stop them. I think your military is scared. Our military isn’t, so I just might send them down to take care of it.”

“Suggesting that U.S. troops may intervene on Mexican soil, for whatever reason, takes the relationship back a century,” said Iñigo Guevara Moyano, an IHS Jane’s Aerospace, Defense and Security consultant who closely follows the U.S.-Mexico defense dynamic.

Trump’s remarks were “part of a discussion about how the United States and Mexico could work collaboratively to combat drug cartels and other criminal elements, and make the border more secure,” the White House said.

Political tensions have risen since last week, when Trump and Nieto publicly sparred over a White House executive order signed Jan. 25 to start construction on a border wall, along with U.S. proposals to levy a 20 percent import tax on Mexico goods.

Caught in the middle of the political maneuvering is a relationship between the nation’s militaries, which have recently built bonds across the border, but could unravel under further tension.

The security dynamic between the two nations has been historically contentious.

Mexico City is dotted with memorials, statues and streets dedicated to young cadets, known as Los Niños Héroes, who were killed defending Chapultepec Castle from U.S. troops during the Mexican American War in 1847. The first line of the Marine Corps Hymn, “From the Halls of Montezuma,” is a reference to the battle.

A more positive relationship between militaries is a recent development of only ten years or so, Moyano said.

The relationship was created by senior political figures and ramped up in 2006, he said, when the Mexican drug war was launched and officials in both countries reassessed how they could share defense responsibilities. The security of the continent remains the primary goal of the partnership, Moyano said.

“It’s really sad to see ten years of trust building could crumble within 10 days,” he said of the recent political fallout.

One immediate effect of deteriorating relations could be a breakdown of trust at the unit level, Moyano said, where missions like intelligence sharing happen constantly across the border. Intelligence missions in the recent past have involved CIA-provided targeting data on drug kingpins, the Washington Post reported in 2013.

Common intelligence sharing between the two militaries involve missions like air and maritime surveillance to interdict drug smuggling. Close coordination is partly achieved through Mexican liaison officers within the Northern and Southern Commands.

Waning political trust between nations might fall onto military personnel responsible for carrying out the day-to-day relationship, Moyano said.

“I would hope both sides are mature enough the relationship spans farther and wider than rhetoric. But it’s difficult to know you’ve been targeted as an adversary after you’ve been an ally,” he said.

Another possible casualty is the program that sends Mexican officers to defense colleges in the United States to foster new perspectives with their U.S. counterparts and gain a sense of a joint operation environment.

The program benefits the Mexican military and the United States, Moyano said. Perspectives on leadership flow both ways, he said.

Interactions and engagement between the two militaries, like aviation maintenance, maritime search and seizure, and rule of law instruction have increased 20 percent from 2014-2016, according to data from Northern Command, which oversees Mexico in its area of operations.

A spokesman for Northern Command declined to comment on Trump’s recent comments, referring all questions to the White House.

The budget for joint training has grown alongside those operations, from $19.5 million in 2013 to more than $27 million in 2016, according to Northern Command data.

Northern Command recently facilitated the sale of 25 UH-60M Blackhawk helicopters, with 8 of those delivered to the Mexican army and air force as of December, said Roberto Garza, a command spokesman. Recent sales have also included 2,250 Humvees, of which 1,320 have been delivered, Garza said.

Many private company sales, like a $266 million deal signed in 2015 for Sig Sauer to deliver rifles and pistols to the Mexican military and police, are supplied over several years. It’s unclear if escalating trade disputes could disrupt future deliveries, Lindsay-Poland said.

Political upheaval is “a moment to re-evaluate the security relationship between the U.S. and Mexico,” Lindsay-Poland said, including private and direct military sales.

“Everyone is still wondering what’s going to happen, and if the military to military relationship is strong enough to remain at the current state,” Moyano said.