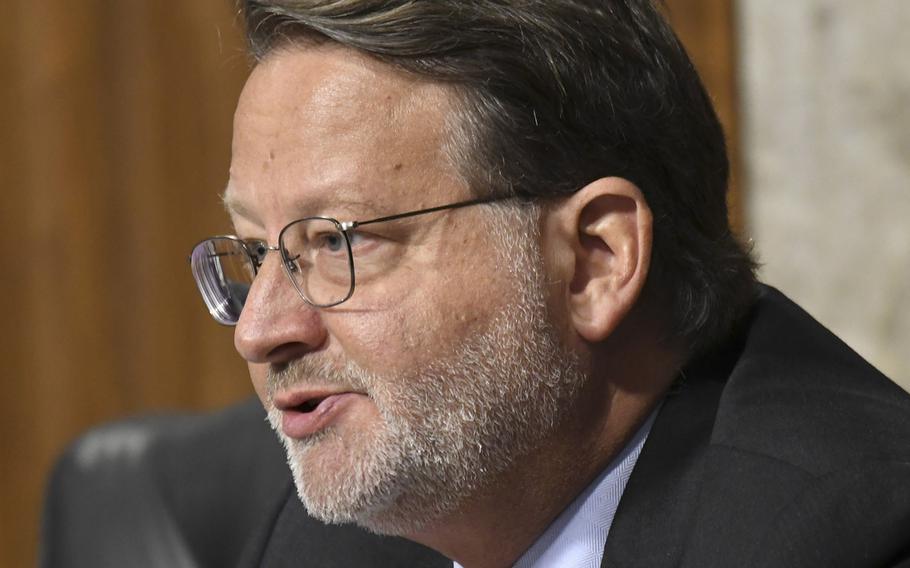 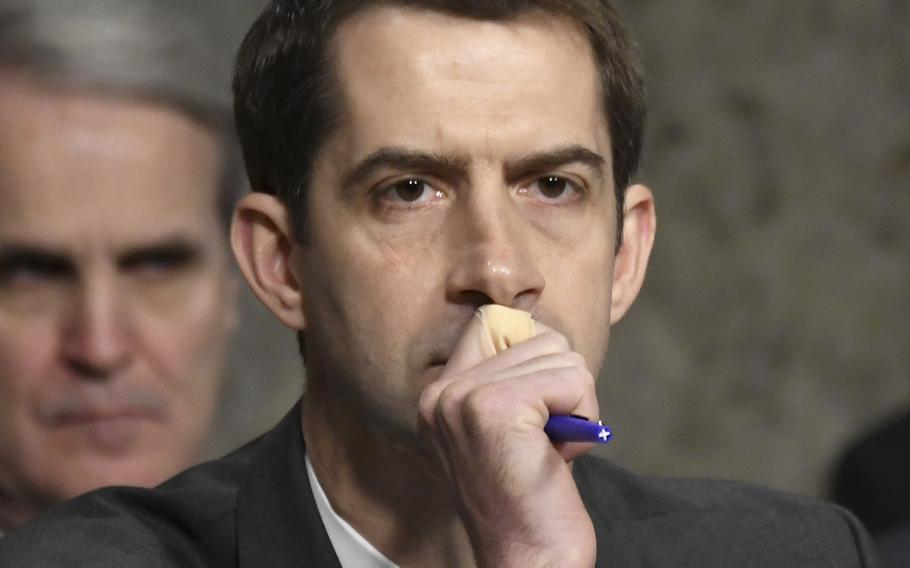 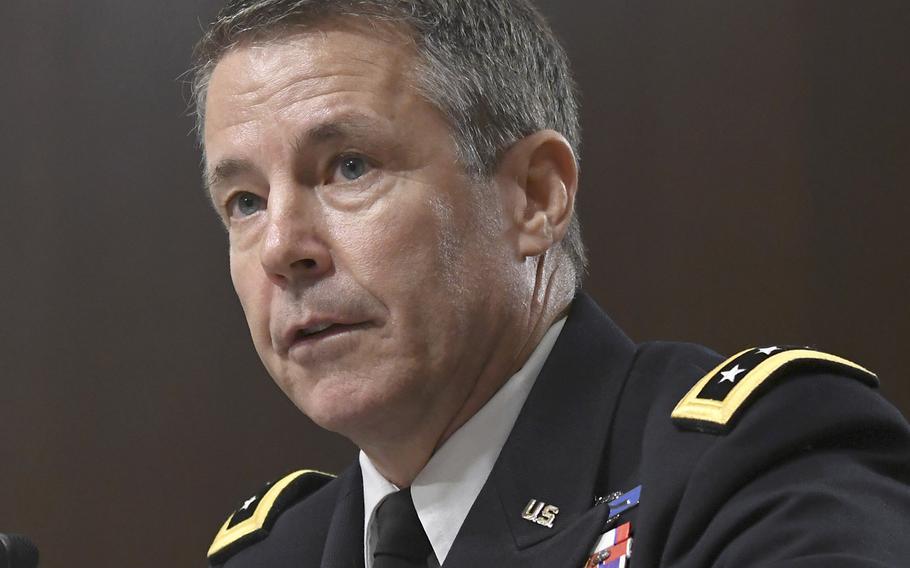 Lt. Gen. Austin S. Miller testifies at a Senate Armed Services Committee hearing on his nomination as general and commander of U.S. forces in Afghanistan, June 19, 2018, on Capitol Hill. ( Joe Gromelski/Stars and Stripes) 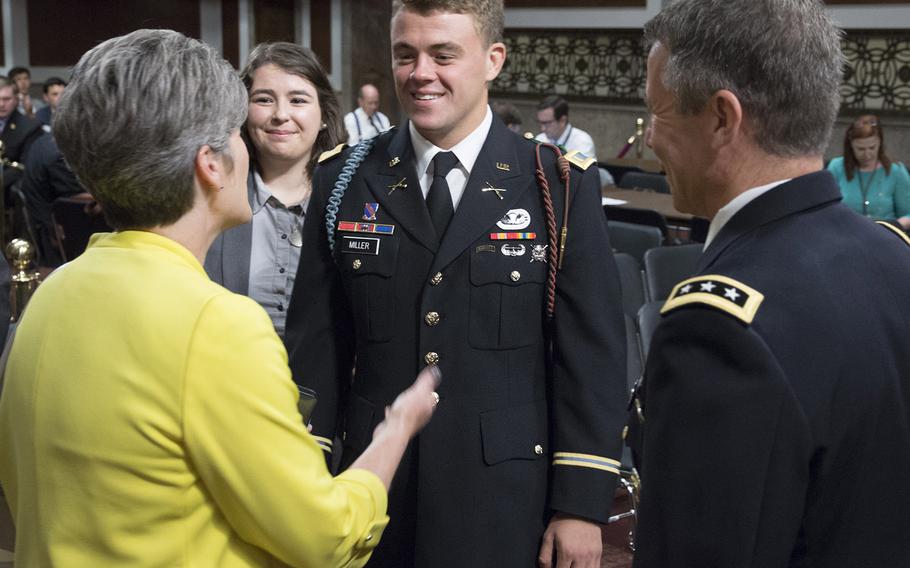 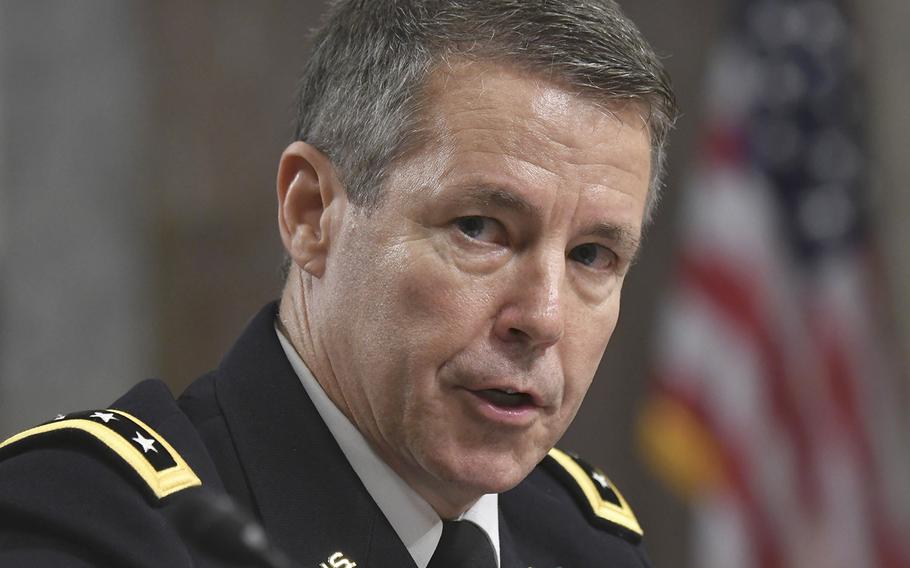 WASHINGTON — President Donald Trump’s choice to lead American and NATO efforts in Afghanistan told lawmakers on Tuesday that a revamped war strategy has made progress but he doesn’t see an end to the 17-year conflict any time soon.

Army Lt. Gen. Austin “Scott” Miller said American troops were needed in Afghanistan to ensure major terrorist organizations including al-Qaida and Islamic State remained unable to launch major attacks against the United States from that country, a position that top Pentagon officials have maintained for years. Miller, who oversees the United States’ most secretive commando units as chief of Joint Special Operations Command, warned withdrawing from Afghanistan would likely mirror the pullout of U.S. troops from Iraq in 2011 — which helped lead to the rise of ISIS.

“I can’t guarantee you any timeline or an end date,” Miller told the Senate Armed Services Committee in a hearing to consider his nomination to become the ninth top American commander in Afghanistan.

Without American forces there, he added, he would “be concerned about ISIS’ and al-Qaida’s ability to emerge and project external operations. One, because I know they want to, and I know they are constantly looking for that opportunity.”

Miller, 57, appeared headed for an easy confirmation to take command of forces in Afghanistan from Army Gen. John Nicholson, who has led U.S. and NATO troops there since March 2016. Miller is expected to be confirmed in the coming weeks and take command in August or September, officials said.

But despite a warm reception from senators who described Miller as “well-qualified” and “one of the most extraordinary general officers in the United States,” several lawmakers told the general that he should take the assignment with an eye toward implementing changes to America’s longest war.

“There is obviously an expectation that you’ll bring something in that is going to offer something new,” said Sen. Jim Inhofe, R-Okla., the committee’s acting chairman. “Come in and give some new insights. To continue to do the same thing that’s been done for 17 years is not going to be acceptable. We expect some major change from you.”

Other senators cautioned the prospects for substantial change to the war in Afghanistan seemed slim.

“I’m afraid we’re asking our military to perform an impossible task,” said Sen. Elizabeth Warren, D-Mass. “Our military cannot and should not be in Afghanistan forever.”

Since last summer, Nicholson has overseen the Trump administration’s new strategy for Afghanistan, including pouring thousands of additional troops into the country, increasing its bombing campaign against the Taliban and pressuring Pakistan to assist in security efforts. Despite the revamped approach designed to drive Taliban leaders into peace negotiations, the U.S.-backed Afghan government only controls land with about 65 percent of the nation’s population, according to the Pentagon. Taliban or other insurgent groups control about 12 percent, and the remaining 23 percent are contested.

Miller, who has spent some 20 years working in special operations since his graduation from West Point in 1989, gave few hints during the hearing about changes that he might make to the war effort in Afghanistan. He repeated several times that if he was confirmed, he would first need to make individual assessments of the war effort before singling out areas that could be improved.

Several defense officials, who spoke on condition of anonymity, told Stars and Stripes that the Pentagon expects him to implement an aggressive but analytical style as the top commander in Afghanistan. Miller was at the helm of the Army’s most elite and secretive unit, Delta Force, which the service does not officially recognize, when it greatly increased its aggressiveness in the war in Iraq, largely in volatile Anbar province, which includes the key cities of Ramadi and Fallujah.

Miller said the United States must continue to train and assist Afghan forces so they can defend their country against insurgents and terrorists.

His career has included deployments to Iraq, Somalia and Bosnia. Miller also said he has spent about four cumulative years serving in Afghanistan.

In 2001, just months after the 9/11 terrorist attacks that sparked the war, Miller was among the first Americans in Afghanistan. He returned for deployments in 2009 and 2013, most recently leading special operations forces in the country.

He told lawmakers on Tuesday that he never imagined the war lasting nearly two decades, recalling conversations he had with fellow servicemembers in 2001 about completing the mission so their children would not have to do so.

His son, Army 2nd Lt. Austin Miller, a new platoon leader with the 82nd Airborne Division at Fort Bragg, N.C., joined him at the hearing. The general pointed out his son was now in the position to potentially deploy to Afghanistan.

“This young guy sitting behind me — I never anticipated that his [generation] would be in a position to deploy as I sat there in 2001,” the elder Miller said.