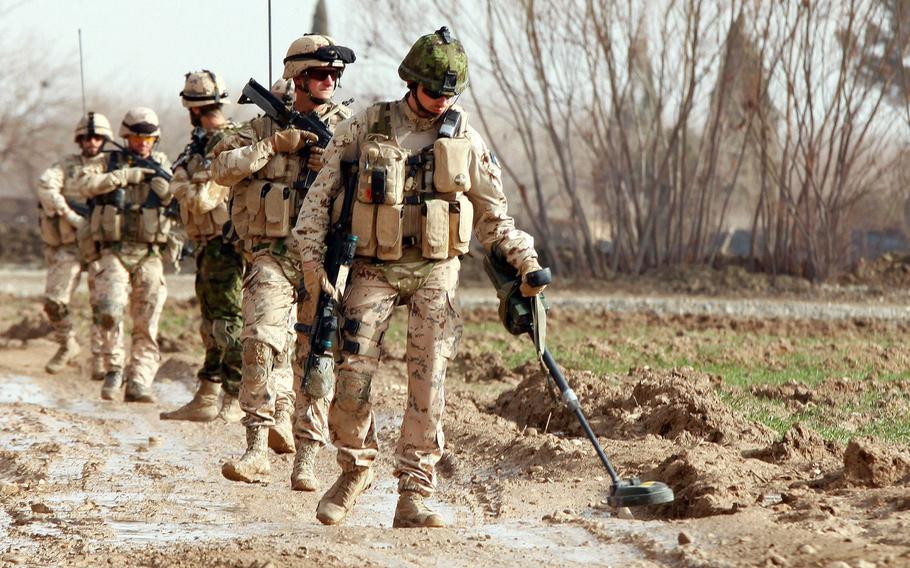 Estonian troops clear a road in Helmand province, Afghanistan, April 4, 2012. NATO?s east European members are perplexed by criticism from Republican presidential nominee Donald Trump that the Europeans are not pulling their weight when it comes to paying for the cost of the alliance. U.S. Marines (U.S. Marines)

Estonian troops clear a road in Helmand province, Afghanistan, April 4, 2012. NATO?s east European members are perplexed by criticism from Republican presidential nominee Donald Trump that the Europeans are not pulling their weight when it comes to paying for the cost of the alliance. U.S. Marines (U.S. Marines) 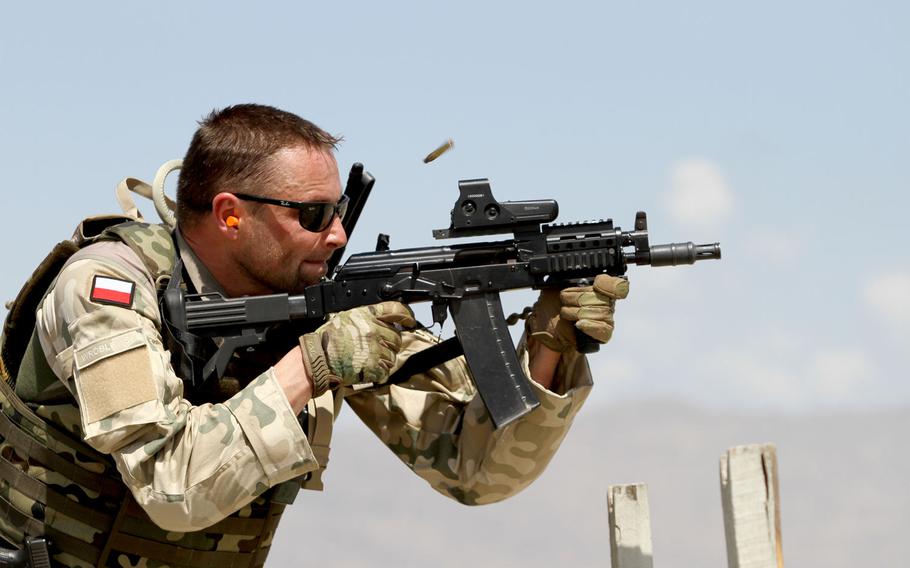 Donald Trump’s threat to end defense commitments to countries that do not pay “their fair share” has brought to a boil an issue that has been simmering for years — that NATO has become a free ride for Europe and an onerous burden to the United States.

Trump’s oft-repeated comments have sent shock waves not only in Europe but among the U.S. foreign-policy community, which fears that the Republican presidential nominee could destroy an alliance system that maintained peace in Europe for more than a half century and propel Russia into a dominant position on the Continent.

“It would harm American interests, make Europe less secure, and be a victory for Vladimir Putin,” said Derek Chollet, a former senior White House official who managed U.S. defense policy for Europe at the Pentagon.

But U.S. officials have been warning for at least four decades that the European allies weren’t taking their defense commitments seriously and that the imbalance in contributions between Washington and Europe was getting harder and harder to explain to American voters.

The United States currently earmarks 3.9 percent of its gross domestic product on defense. The rest of NATO averages just 1.4 percent — although the U.S. maintains forces in areas such as the Pacific and Africa, where most of the allies do not.

In a 2011 speech in Brussels, Defense Secretary Robert Gates, who served in both Republican and Democratic administrations, warned that “the blunt reality is that there will be dwindling appetite and patience in the U.S. Congress, and in the American body politic writ large, to expend increasingly precious funds on behalf of nations that are apparently unwilling to devote the necessary resources ... in their own defense.”

“Future U.S. political leaders, those for whom the Cold War was not the formative experience that it was for me, may not consider the return on America’s investment in NATO worth the cost,” Gates said.

Under pressure from Washington, NATO member states agreed in 2006 to spend at least 2 percent of their GDP.

At present, only four European allies — Greece, Poland, Estonia and Britain — are meeting the target, partly because the global recession of 2008 upended the spending programs of most other members.

Two years ago, NATO members reaffirmed the 2 percent spending target and set a new deadline of 2024 for meeting it. It’s unclear, however, whether Trump as president would consider the 2 percent benchmark a “fair share.”

Raising the percentage would be politically difficult, especially given differences of opinion among European states over the seriousness of the Russian threat. Those countries farthest from Russia’s borders are the most skeptical.

Some critics have maintained that the problem is not simply how much NATO spends but whether it’s using the money wisely. Europe’s patchwork of small countries has produced a welter of small armies that would be ineffective in combat.

Other critics, including Trump, have complained the alliance needs to shift resources from confronting Russia to Islamist terrorism, which many Americans as well as Europeans see as a more immediate threat.

Trump’s political ally Newt Gingrich has been even more explicit. “I’m not sure I would risk a nuclear war over some place which is the suburbs of St. Petersburg,” the former House speaker said in a CBS interview Wednesday.

Besides the question of NATO’s contribution to America’s overall global foreign policy, simply calculating the “dollars and cents” cost of NATO membership to the U.S. taxpayer is complicated.

The U.S. currently spends about $685 million annually to fund NATO’s headquarters and pays 22 percent of the alliance budget.

But that represents only a portion of the Pentagon’s expenditures in Europe. Washington spends much more on so-called indirect spending, the voluntary national contributions that pay for military exercises, ballistic missile defense, aerial refueling, electronic warfare and intelligence, surveillance and reconnaissance.

The total cost of the U.S. military’s forward presence in Europe is hard to measure because of the range of missions, many lines of funding and separate service budgets. For example, the U.S. European Command’s headquarters costs just $127 million annually, but that doesn’t account for the costs of all exercises and other mission-related items.

A 2014 analysis by the Rand Corp. estimated that it costs between $15,000 and $40,000 annually to station a servicemember in Europe, given higher costs of living and lower levels of host nation funding. There are about 65,000 Americans stationed in Europe, down from about 200,000 about 25 years ago.

Sam Perlo-Freeman from the Stockholm International Peace Research Institute said it was near impossible to figure out precisely how much the U.S. spends on NATO. “Exactly how you’d decide what proportion … is NATO-related would be rather arbitrary (because) the U.S. defense budget is not disaggregated on a regional basis.”

“The arguments about burden sharing, where much higher US military spending is contrasted with lower European levels, does not usually take account of this,” said Perlo-Freeman, who heads SIPRI’s project on military expenditures.

He said the costs of U.S. forces in Europe, as well as of NATO missions such as the 15-year war in Afghanistan, would have to be included in the calculation. It would also have to include those U.S. nuclear forces that relate to NATO and many other items.

Since World War II, Washington has concluded security pacts with more than 60 nations, creating a network that spans five continents covering a quarter of the world’s population and 75% of global economic output, the according to recent report by the Clingendael Institute of International Relations.

“Trump-style foreign policy is simple — each favor comes at a heavy price, the U.S. in effect becoming a security firm for hire,” the Dutch think tank said. “All treaties with foreign countries will have to be overhauled and many will fall by the wayside, because a lot of them are too much of a burden for America.”

Trevor Thrall, a senior fellow at Washington’s Cato Institute, a libertarian think tank, said it was a “myth” that Europe was somehow defenseless against Russia without the United States there to defend it.

“Europe should not be so scared, that’s the bottom line here,” Thrall said. “European countries have much larger economies, defense budgets and military establishments than Russia.”

“The second myth is that if we pulled out of NATO we could never talk to the Europeans again and never come to their aid if the Russians somehow start marauding through Europe,” Thrall added. ”That’s ridiculous. We could continue to share intelligence and come to the aid of Europe just as we did in both world wars.”

In principle, the U.S. could replace NATO with a series of bilateral defense agreements such as those with Australia, Japan and South Korea, though the process could take years.

For their part, the most vulnerable NATO members, including Poland and the Baltic states that were once part of the Soviet empire, have reacted cautiously to Trump’s remarks, hoping they are simply campaign rhetoric that will disappear if he wins the White House.

“I do not think interpretations of candidate Trump’s remarks are necessary,” Lithuanian President Dalia Grybauskaite said. “We know that the United States will remain our most important partner.”

Miroslav Lazanski, a prominent defense analyst in non-NATO member Serbia, said candidates often present fresh ideas and promises but then change their tune once in office.

“Trump is now free to voice these ideas which can attract voters, particularly when it comes to America’s disproportionate contribution to NATO,” he said. “But it will probably be a very different story if he ever gets into the White House.”