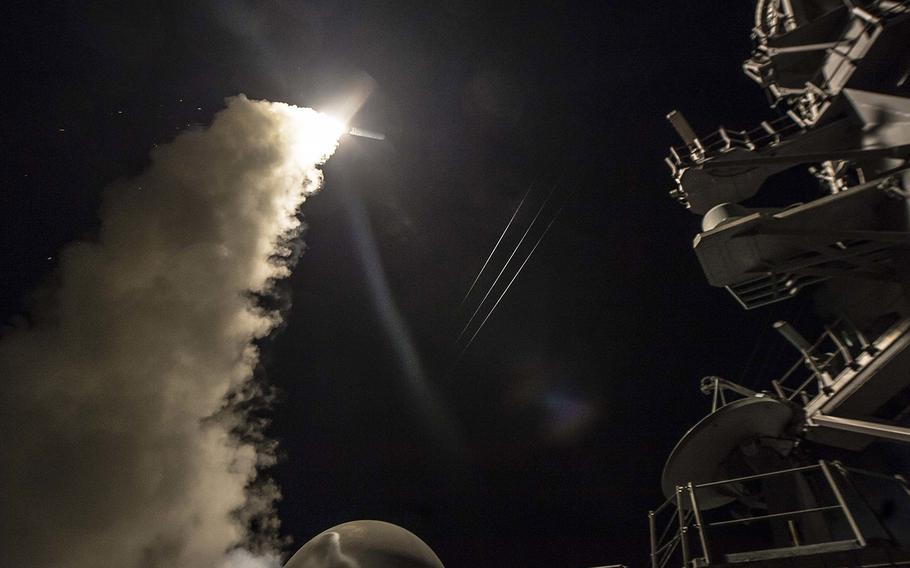 WASHINGTON -- If the Navy gets what President Donald Trump’s budget requested, one item on its 2018 shopping list will be 100 Tomahawk cruise missiles, including 66 to replenish those fired in the last year at targets in Syria and Yemen, according to the service.

The missiles that were expended cost about $1 million each, according to recent estimates. But the price tag to replace them with newer versions is starkly higher – at $1.91 million per missile, Navy budget procurement documents revealed.

The budget proposal calls for 66 of those missiles to be funded through the Overseas Contingency Operations account, also known as the war fund, “to replace those expended in the Red Sea and Syria,” said Rear Adm. Brian Luther, the deputy assistant secretary of the Navy for budget. The other 34 will come out of the baseline budget, he said

Fiscal year 2017, which ends Sept. 30, has proven to be a busy one for Tomahawk missiles. In October, while in the Red Sea, the destroyer USS Nitze launched several Tomahawks at three coastal radar sites under control of Houthi rebels in Yemen in response to a cruise missile attack on Navy ships operating near the coast. The budget documents reveal five Tomahawks were fired.

In April, two destroyers in the Mediterranean, the USS Ross and the USS Porter, fired Tomahawks at a Syrian airfield in response to a chemical weapons attack on civilians by the Syrian government. At the time, officials said 60 of the cruise missiles had been fired but one had landed in the water shortly after launch. The 2018 budget document states 61 missiles were expended.

That was the first time the U.S. military has used Tomahawks since 2014, when they were deployed against Islamic State militants.

The Tomahawks, though financially costly, enable targeted attacks from a distance of up to 1,000 miles from the site and without endangering pilots.

According to the budget documents, 34 Tomahawk missiles will be funded from the baseline budget at a cost of about $90.65 million. The Navy proposal also calls for spending about $43.73 million for the initial procurement of modernization kits that will go toward planned maintenance and recertification of Tomahawk missiles starting in 2019.

Navy officials did not immediately respond to a request for more information surrounding the rising costs. But in his comments about the budget Tuesday, Luther did indicate it could have been even costlier.

He said the Navy added the additional 34 Tomahawks to the base budget to bring the total to 100 in order to get a better price.