Trump: Report of US plans calling for up to 120,000 troops if conflict begins with Iran is 'fake news' 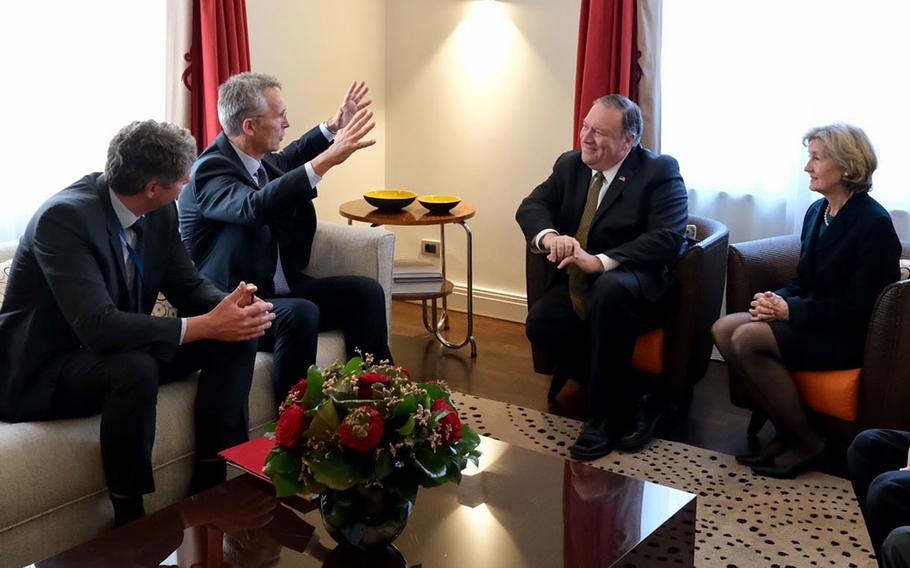 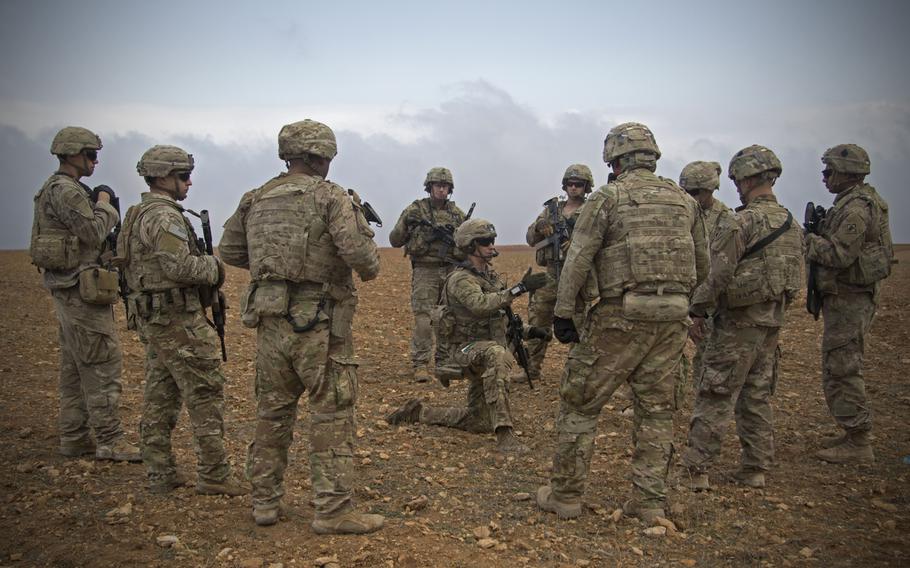 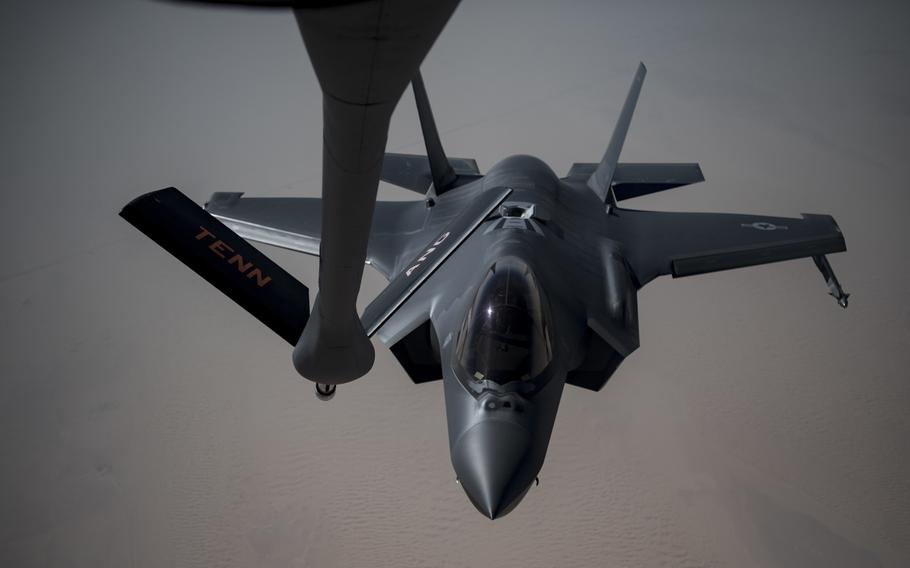 An F-35A Lightning II receives fuel from a KC-135 Stratotanker from the 28th Expeditionary Aerial Refueling Squadron, May 12, 2019, over an undisclosed location. (Keifer Bowes/U.S. Air Force) 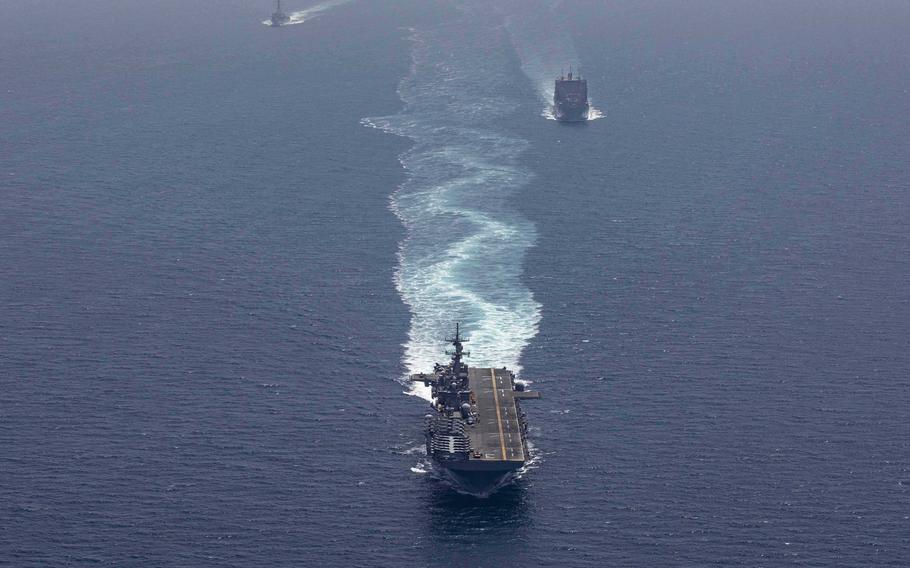 The Pentagon has drafted plans to send up to 120,000 troops to the Middle East in the event Iran launches an attack on U.S. forces in the region or restarts its nuclear weapons program, the New York Times reported.

President Donald Trump dismissed the report as “fake news,” but added: “Would I do that? Absolutely.” He insisted the White House has not signed off on a troop increase but if it does “we’d send a hell of a lot more troops than that.”

The size of the purported force — 120,000 troops is roughly the number the U.S. used to invade Iraq in 2003 — has shocked some officials inside the Trump administration, the Times reported on Monday, citing unnamed national security officials.The New York Times did not say the plan had been accepted but reported that it had been presented by Acting Defense Secretary Pat Shanahan at a meeting of Trump’s top aides last week.

The report comes as tensions between Washington and Tehran have risen following what officials citing classified intelligence said were signs of possible threats to U.S. forces or interests in the region. It is not clear whether Trump himself has been briefed on the Pentagon plan.The Trump administration has warned that “Iran or its proxies” could be targeting ships in the Persian Gulf region. Saudi Arabia said this week that two of its oil tankers were sabotaged off the United Arab Emirates in attacks that caused “substantial damage.”

In Europe, there are concerns that the U.S. and Iran could stumble into a military confrontation.

“We are very worried about the risk of a conflict happening by accident, with an escalation that is unintended really on either side but ends with some kind of conflict,” British Foreign Secretary Jeremy Hunt told reporters in Brussels.

“What we need is a period of calm to make sure that everyone understands what the other side is thinking,” Hunt said.

While Washington has upped the pressure, it’s still unclear whether Trump, who campaigned on an anti-interventionist platform and repeatedly denounced the Iraq War as a blunder, is willing to get drawn into another military confrontation in the Middle East.

Some analysts say the chances of a large-scale conflict are still remote.

“Public support for major U.S. interventions in the region has clearly declined over the past decade and the U.S., no matter what administration is in office or what is its policy toward Iran, is not likely to further intervene militarily in any regional conflict for the sole reason of blunting the impact of Iran’s regional strategy,” said an analysis by the Soufan Center, a New York-based security firm.

Meanwhile, the U.S. has expedited deployments to the region in connection with increased concerns about potential Iranian aggression.

Last week, the Pentagon ordered a Patriot missile battery and an amphibious transport dock warship to the Middle East. That follows the deployment of an aircraft carrier strike group and a task force of B-52 bombers into the region.

Over the weekend, four commercial ships anchored near the United Arab Emirates were damaged in what U.S. military investigators believe may have been attacks carried out by Iran or its proxies, The Associated Press reported.

The rhetoric between Washington and Tehran also has become increasingly heated. Last year, tensions spiked when the Trump administration decided to pull out of the 2015 nuclear deal with Iran and impose new sanctions.

Since then, Iranian political and military leaders have repeatedly threatened to target U.S. military assets in the region if Washington sought to prevent Tehran from exporting its crude oil. The Trump administration last month ended waivers from sanctions for several major importers of Iranian oil.

Meanwhile, the U.S. has warned it would take military action if Iran acted upon a threat to close the Strait of Hormuz, a strategic energy choke point through which millions of barrels of oil pass each day.

Washington also has accused Iran of being the main destabilizing force in the Middle East, backing proxy forces in Syria and Yemen that the U.S. opposes.

The State Department designated Iran’s Revolutionary Guard Corps, which recruits and trains militants to fight in proxy forces, as a terrorist organization last month. In response, lawmakers in Tehran declared U.S. troops terrorists and called the U.S. a state sponsor of terrorism.