Trump reaffirms ‘ironclad commitment’ to US alliance with South Korea 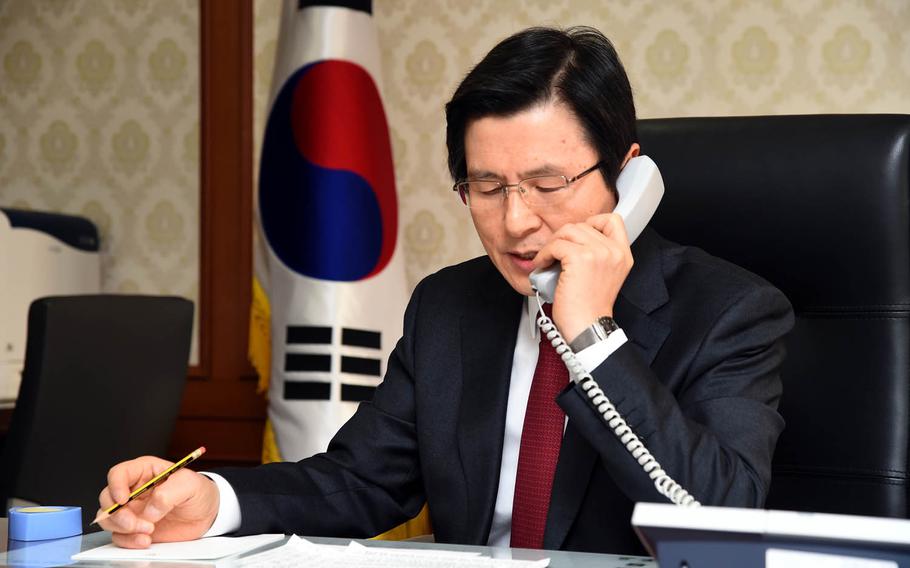 The leaders also agreed to strengthen joint defense capabilities as they face a growing nuclear and missile threat from North Korea, the White House said in a statement.

The call — the first time Trump and acting President Hwang Kyo-ahn have spoken — offered much-sought reassurance to South Koreans nervous that the new U.S. administration might change longstanding policies toward the divided peninsula.

“President Trump reiterated our ironclad commitment to defend [South Korea], including through the provision of extended deterrence, using the full range of military capabilities,” the White House said.

U.S. Defense Secretary Jim Mattis, a retired Marine general, will visit South Korea and Japan later this week on his first overseas trip in his new role. The leaders discussed his upcoming trip and noted “that it reflects the close friendship between our two countries” and the importance of the alliance, the statement said.

“They also pledged to advance mutual security and prosperity,” it added.

During the bitter election campaign, Trump suggested South Korea and Japan should pay more for their defense and raised the possibility of withdrawing U.S. forces or allowing the Asian nations to develop their own nuclear weapons.

But Trump appears to have softened his stance since becoming president, first in a phone call to President Park Geun-hye shortly after his election in November and again in the conversation with Hwang, who assumed the helm after lawmakers voted to impeach Park over a corruption scandal.

Tensions have been high as North Korea has made alarming progress in its nuclear weapons program, conducting two underground atomic explosions and some two dozen ballistic missile tests last year.

North Korean leader Kim Jong Un said in a New Year’s address that his country was in the “final stages” of developing an intercontinental ballistic missile, which would be a major step toward its stated goal of targeting the U.S. mainland.

However, South Korean military officials said Monday that the communist state is more likely to launch a Musudan intermediate-range missile instead of an ICBM in the near future, the Yonhap news agency reported.

“There are no signs of an imminent test firing of an [ICBM] by North Korea,” an official at the defense ministry was quoted as saying. “But we are closely monitoring any new military activities in the country as it could launch an IRBM (intermediate-range ballistic missile) at any time if [Kim] gives the order.”